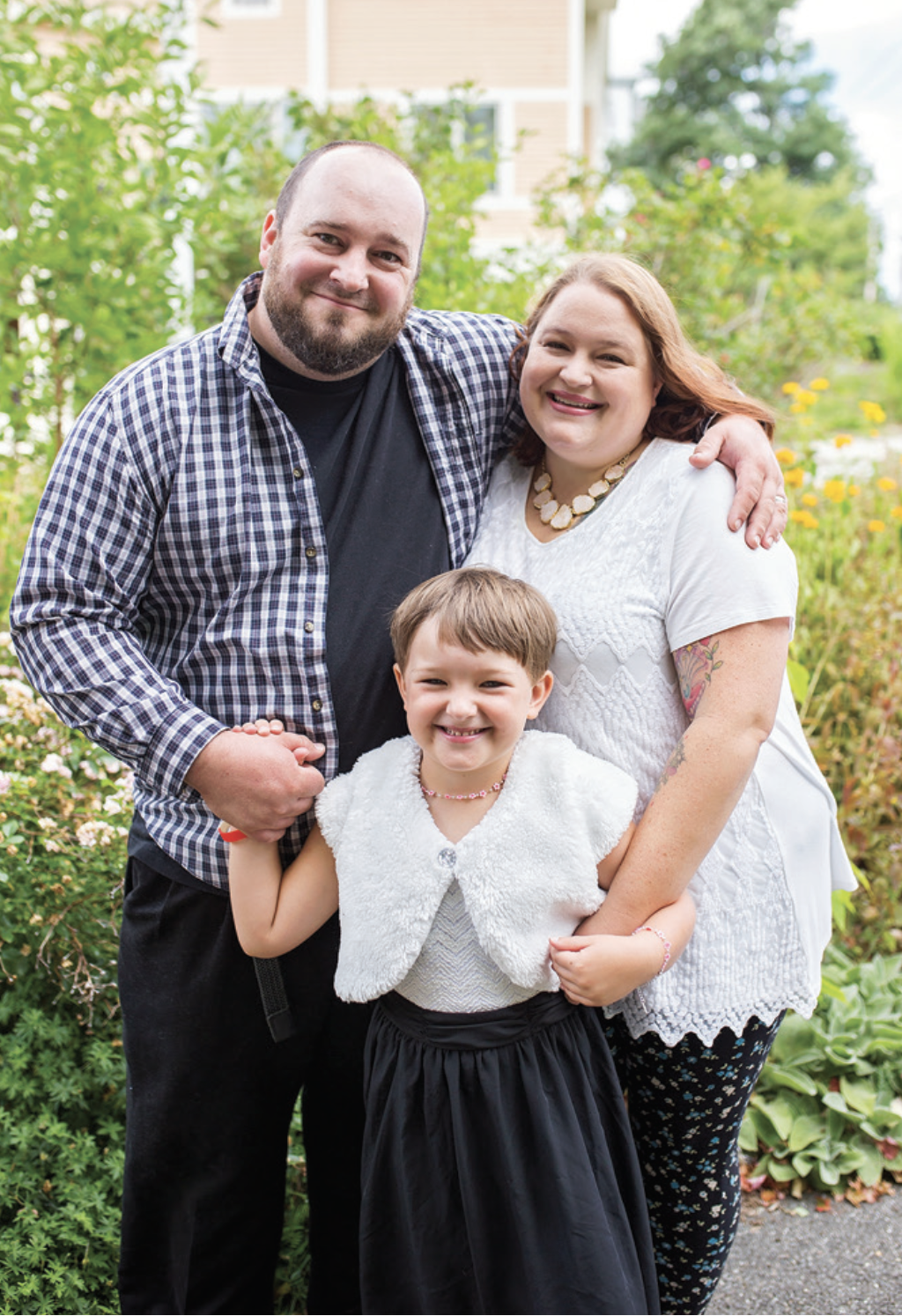 A chance to succeed

‘Non-traditional’ students pursue their dreams thanks to Senior Alumni Scholarships

BY THE TIME Erica Sturrock ’17 graduated from Brewer High School in 2001 she had moved 14 times in just four years. “I was born to a young, single mother who struggled to provide any kind of stability for us,” she says.

Life wasn’t easy for the teenager. Her family was evicted several times and Sturrock often ended up couch surfing with friends. “So I missed a lot of school,” she explains.

Her biggest dream was to go to college but Sturrock had accepted long ago that paying for school simply wasn’t an option. Still, she applied and was accepted to the school she wanted to attend the most — the University of Maine. “I was over the moon,” Sturrock says. But then financial reality set in. Instead of moving into a college dorm the fall after her high school graduation, she moved into an apartment and started working full- time to make ends meet.

After awhile, life started looking up. Sturrock reconnected with a friend from high school, they married, and had a daughter. “Life felt complete,” she says. “Well, almost complete.” Sturrock still had a goal of completing college and now there was even more incentive because a degree would mean more money at her job.

So, at the age of 30, Sturrock began taking classes at the University of Maine at Augusta’s Bangor campus. When a professor suggested she had the talent to succeed at a higher level, Sturrock took his advice and transferred to Orono to pursue a bachelor’s degree in economics.

“I can tell you that a person who grows up poor is already a natural economist,” she says. “Resource allocation is a survival tool.”

Sturrock learned about a scholar- ship program at UMaine specifically for “non-traditional” students like herself: women and men who, for a variety of reasons, postponed the pursuit of college after high school for several years or even decades. It’s funded by Senior Alumni, an affinity group of the UMaine Alumni Association.

Sturrock received her Senior Alumni scholarship award letter at a pivotal point in life. “I was on the verge of leaving school because of the debt I was putting my family into,” she says. “This scholarship felt like a sign that I was on the right path.”

FORMED IN 1935, Senior Alumni is comprised of individuals who graduated from UMaine 50 or more years ago. In 1985, the group decided to dedicate its fundraising focus on helping UMaine’s non-traditional students by creating what’s commonly known as Taverner Scholars, named in honor of Donald V. Taverner ’43, who led the UMaine Alumni Association during the 1950s and ’60s. 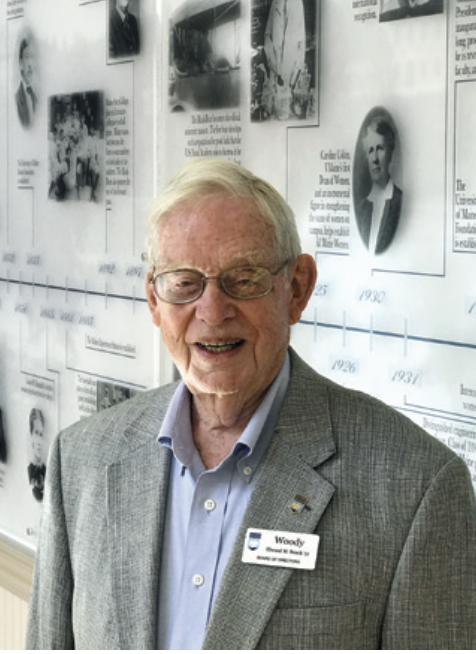 “We are currently awarding $2,500 to each recipient their first year,” explains Elwood “Woody” Beach ’51, Senior Alumni president. “Then if they success- fully complete one year of schooling, they are eligible for a second $2,500 award.”

Part of the application process involves writing an essay of need. A committee of Senior Alumni volunteer to read those essays and help decide who is most deserving of the annual scholarships.

“No two stories are alike,” says Lin- wood “Woody” Carville ’53, one of many Senior Alumni volunteers who review applications. (Editor’s note: Yes, both Beach and Carville share the same nick- name.) Carville became involved with the Senior Alumni scholarship program through his late wife, Jean ‘54. “She was asked to help read potential recipients’ essays,” he explains. “Well, I started read- ing some of those essays too and I just got so interested in how these people man- aged to go to school and balance all of their other obligations in life. I mean, how can they do it all?”

Carville is especially moved by applicants who are moms and dads. “Quite often, they will mention in their applications that their children are so proud that their parents can go to college,” says Carville, his voice filling with emotion. “You wish you had millions of dollars to help everyone out.”

Doug Morton ’50 started reading essay applications about a decade ago when he became a Senior Alumni officer. “Many of our recipients go on to get degrees in teaching, nursing, engineering, and technology,” he says. “They’re definitely a gain for our school and for our state. Some of them have been on welfare programs, so they’ve gone from needing money to paying it back. My gosh, that’s a double turnaround.”

Morton admits that he often struggles with deciding who is most worthy of the scholarship funding. “That is the tough part, yes,” he says. “Sometimes I feel guilty about those that I just can’t help.”

The Senior Alumni Scholarship pro- gram will often be named in wills or trusts. And it’s not uncommon for entire classes to donate as a charitable gift. “The nontraditional student scholarship program is one of my favorite programs,” says Ashley Nemer Twombly ’10, ’12G, associate director of alumni programs. She works with UMaine’s financial aid office to find out which nontraditional students are eligible for the scholarship and to pro- mote its availability.“It is so rewarding to be a part of changing students’ lives and being able to witness that generosity of our alumni. The Senior Alumni really feel a connection to the students applying and they truly want the best for them.”

CHERYL  WAGNER  CORSON  ’88 says receiving her Senior Alumni scholarship “felt nicer than any other financial aid that I have been given in my life.” Corson started going to college back in 1973, but dropped out two years later. She moved to Mount Desert Island in 1983 to work as a weaver. She eventually landed a part-time position at the Maine Arts Commission. The opportunity to work full-time presented itself with one catch — Corson needed a college degree.

“So in 1986, I enrolled in the University of Maine at the age of 30,” she says. Corson majored in public administration with a concentration in art history.

Corson had a 136-mile commute from Mount Desert Island to Orono, and back.

“It was very challenging to go to school and work full-time,” she remembers. “I was kind of living in my car,” she jokes. “Not literally, but it felt like it. It was crazy.”

Corson’s essay on her struggles to go to school, earned her a Senior Alumni scholarship. “They didn’t just hand you a check,” she recalls. “There was a ceremony with photos. You could tell there was a tremendous amount of care that was offered beyond the money.”

Corson now runs a successful landscape architecture design business in Maryland and teaches webinars. She also wrote a book, Sustainable Landscape Maintenance Manual for the Chesapeake Bay Watershed, for which she recently won a national award.

She never forgot how meaningful her Senior Alumni scholarship was, making a point to donate back to the fund for years after graduation. “You were always a little invisible on campus as a commuter,”

Corson explains. “You didn’t live there so you weren’t in the same social crowds as your classmates. That recognition (from the Senior Alumni) was a feeling of visibility — like, we see what you are doing and we want to support people like you who are going to unusual measures to complete their education.”

Sturrock expresses no bitterness about her experiences growing up, saying they provided valuable life lessons. She is eternally grateful for the opportunities given to her by the Senior Alumni.

“Every nontraditional student has a story,” Sturrock says. “They heard mine and helped to give it a happy ending.”