Established in 2021 by the Greater Bangor Area Branch NAACP and the University of Maine Alumni Association, the series is named in honor of Robert “Bob” Talbot. For decades the Bangor native has been one of Maine’s foremost leaders in the pursuit of racial equity, justice, and non-discriminatory policies and practices.

The Robert Talbot Civil Rights Speaker Series will consist of an annual fall event featuring one or more high-profile state or national civil rights activists. Each year’s program will be held on the UMaine campus unless circumstances require the event to be held online. Given the series’ educational importance, the annual event will be structured to attract and accommodate students and members of the public. No admission fee will be charged. 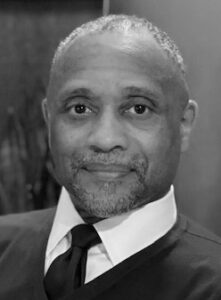 Following Justice Lawrence’s formal remarks, attorneys Ukeme Awakessien Jeter and Angela Okafor will join him for a conversation and Q&A regarding the program’s theme.

Visit our.umaine.edu/2022talbot or call 207.581.1144 to register. Admission is free.
This event is supported by a generous grant from:

In April 2000 Governor Angus King appointed Lawrence to a seven-year term as a judge of the Maine District Court.  He was subsequently reappointed to additional seven-year terms by Governors John Baldacci, Paul LePage, and Janet Mills.  He also served as an adjunct professor at the University of Maine Law School from 2014 to 2020.

In 2022 Governor Mills appointed Lawrence to Maine’s Supreme Judicial Court.  He was sworn in as Associate Justice on May 4, 2022.

A 2004 UMaine graduate with a degree in mechanical engineering, Ukeme Awakessien is an intellectual property attorney and partner with the law firm Taft Stettinius & Hollister. In addition, Jeter is a community activist who earlier this year was elected to the Upper Arlington (Ohio) City Council. Her extensive volunteer work includes serving as a member of the UMaine Alumni Association’s Board of Directors.

Angela Okafor is an immigration attorney with Okafor Law Practice and has served for the past three years as a member of the Bangor City Council. Currently Okafor is serving as Acting Director of Outreach and Community Engagement for the State of Maine’s Permanent Commission on the Status of Racial, Indigenous and Tribal Populations.  In addition, Okafor is a small businessperson who owns an international food market and a salon, both located in Bangor.

Donations to the fund are tax-deductible and are held by the University of Maine Foundation. Donations and sponsorships will be used solely to cover costs associated with the annual event, which will be organized by the Alumni Association in coordination with the Greater Bangor Area Branch NAACP. Tax-deductible donations may be made here. Thank you!