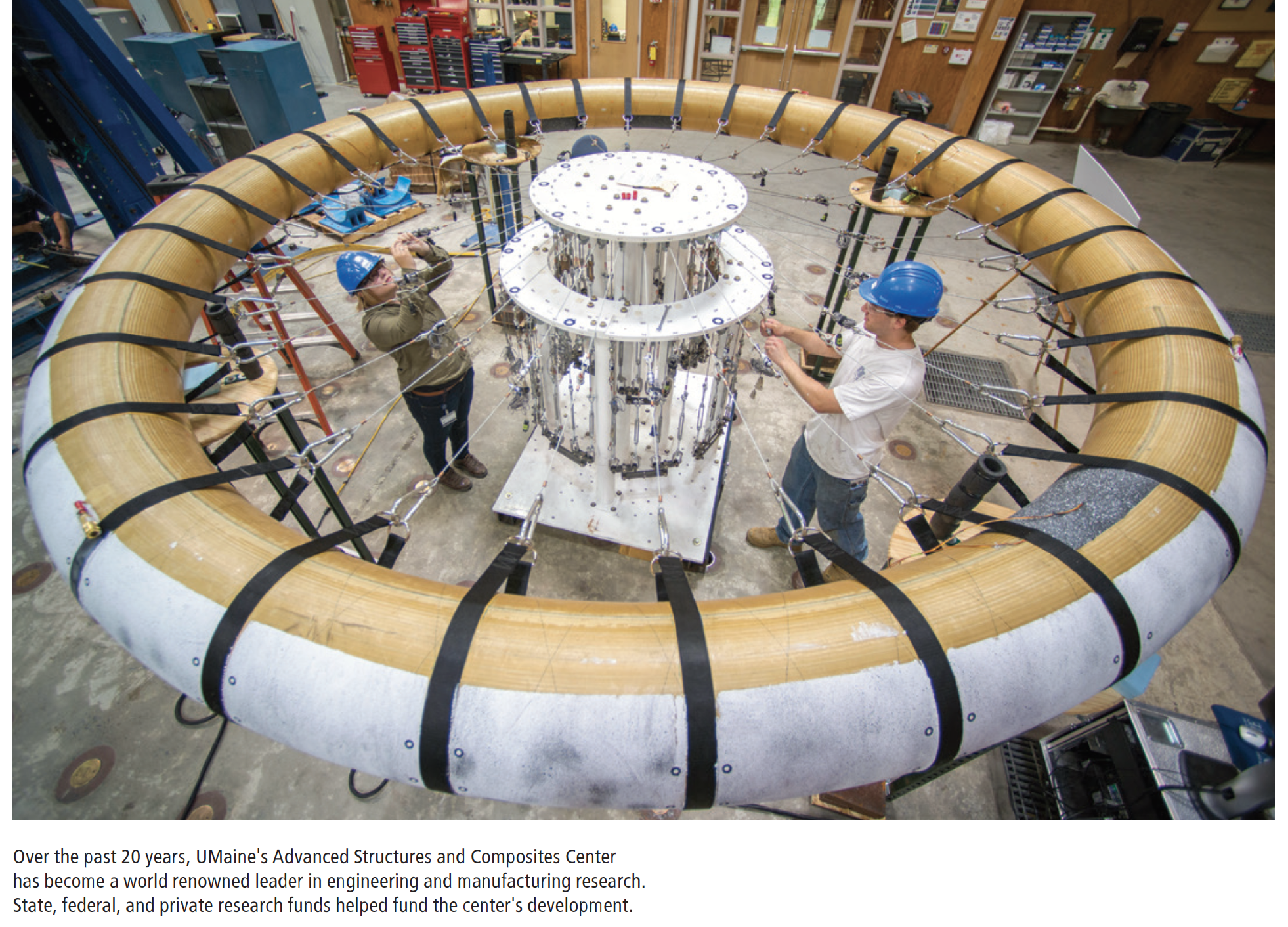 A Lesson in Advocacy

Twenty years ago, five UMaine faculty members convinced policy makers and tax payers to invest in university-based research as part of a larger strategy to build Maine’s economy. A forthcoming book about UMaine’s past 50 years highlights their efforts as a transformative part of the university’s history. Here’s an excerpt.

THE “FACULTY FIVE,” as they became known, were highly regarded tenured faculty from five academic disciplines. Led by George Jacobson, a professor of biology, ecology, and climate change, the group also included Stephen Norton (earth sciences), George Markowsky (computer science), Malcolm Hunter (wildlife ecology), and David Smith (history). Alarmed that stagnating state appropriations during the early 1990s had led to major reductions in critical faculty positions as well as a lack of sup- port for scientific and technical research, they began a public campaign to raise awareness of UMaine’s role and potential in influencing economic development in the state.

At the time, Maine was dead last of all states in research and development (R&D) investment per capita. Worse, little was being done in the state to change that status; as the economic recession of the early 1990s rippled through the decade, UMaine’s state appropriation was cut nine times during a six-year period. At one point, half of UMaine’s custodial staff was eliminated as a consequence of timing, economic necessity, and the university’s ability to do so under the custodians’ collective bar- gaining agreement.

Campus morale plunged when in December 1995 University of Maine System leaders announced that, in light of state cuts and the state’s financial condition, they planned to cut university budgets an additional two percent annually for the next five years. The net results included a loss of faculty and staff positions as well as reduced or eliminated funding for laboratories, equipment, and other necessities UMaine needed in order to compete for students, grants, and contracts.

To the Faculty Five, university leaders appeared to be declaring the situation hopeless when, as they would later prove, it was not. The professors understood that annual cuts in the state’s appropriation to the university were not a given; Maine’s state legislature and governor had the power to change the University of Maine budget if they wanted to. The faculty members believed that unless state and university policy makers chose to stop this downward trajectory, UMaine would lose its viability as a land- grant institution, a federal designation that obligated it—on paper and in practice—to serve Maine’s educational, societal, cultural, and economic needs through teaching, research, and public service. The situation required an intervention. 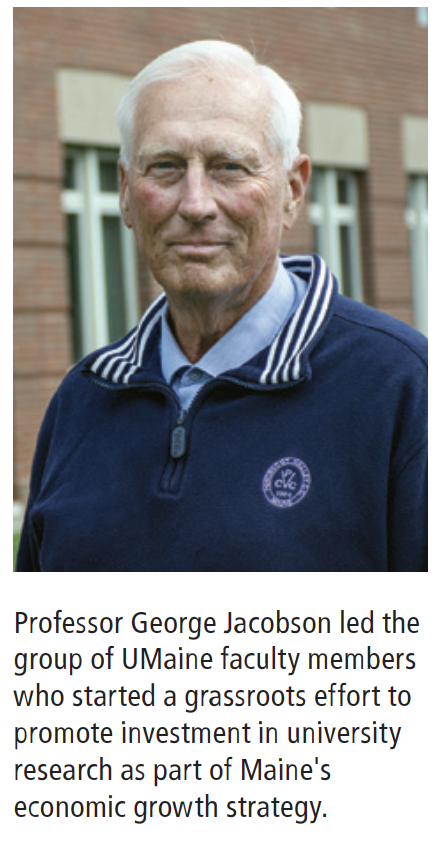 George Jacobson and the Campaign

BEFORE  JOINING THE UMaine faculty in 1979, Jacobson was a Congressional Science Fellow, a prestigious appointment selected by the American Association for the Advancement of Sciences. Between 1976 and 1979 he served as a staff scientist on the United States Senate’s Committee on Environment and Public Works. Through that experience, Jacobson gained first- hand experience in legislative processes and budgetary decision-making. When in 1995 University System leaders announced plans to impose a series of annual funding cuts, Jacobson recognized the urgency—and opportunity— for action.

Through a series of conversations, he and his colleagues understood that UMaine’s research talents and potential were not being utilized by those in a position to influence to boost Maine’s economy. It was different in most other states, where over the years university-based R&D had produced significant — some- times transformational — economic benefits for their home states and the nation. Familiar examples could be found in the Route 128 corridor around Boston, North Carolina’s Research Triangle, and Northern California’s Silicon Valley — all areas where university-based research and innovation had been driving the regional economy, often resulting in new jobs, businesses, and industries.

The Faculty Five believed that a similar emphasis and investment in Maine could boost and diversify the state’s economy and help lessen its vulnerability during times of recession. They devised a public awareness and advocacy campaign to educate decision makers and the public, emphasizing the proven value of research and innovation as an economic growth strategy. They reached out to editorial writers, policy makers, and candidates for office, business, and community leaders, and just about anyone else who would give them an audience. Their message was simple: “Maine needs a strong research university to be at the center of a strong, innovative economy.”

Part of their campaign involved providing a historical context. In the aftermath of World War II, the federal government adopted a new approach to the nation’s science and technology needs. Rather than create and operate government-run labs, as was the practice in many other countries, the U.S. decided to partner with universities and private-sec- tor labs to fund and advance science and innovation. As part of that strategy, the federal government established agencies such as the National Science Foundation and the National Institutes of Health to review, fund and evaluate research proposals through an open national competition among researchers. 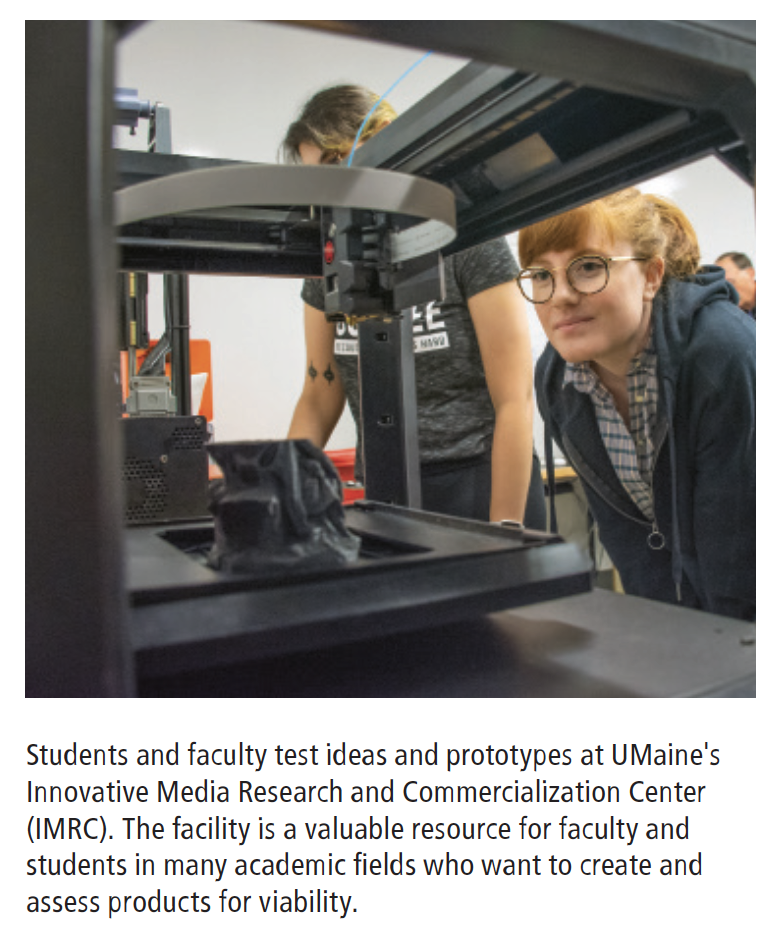 In response, many states invested heavily in their research universities during the 1950s and 1960s to ensure that they could compete at the highest levels for the federal funding–and to take advantage of the financial incentives to do so. Maine was not among the states that sought to participate. That was evident when comparing UMaine — the state’s designated research university — with what occurred at research universities elsewhere. In the absence of state investment in university-based R&D, it took until 1979 for UMaine to reach the $1 million mark in federally funded research grants annually received. By comparison, some research universities around the country were, in 1979, attracting federal grants that amounted to hundreds of millions of dollars per institution.

It wasn’t that UMaine lacked the talent to compete with other universities. To the contrary, its faculty had an impressive 35 percent success rate in having their grant proposals approved. But UMaine lacked the state and university investment to support the infrastructure and personnel needed to be considered for a broader array of grant possibilities. That was a major impediment to UMaine’s prospects for advancing its R&D enterprise.

Understanding this, the Faculty Five spent about three months developing its case, aided by UMaine’s vice president for research and his staff. They noted Maine’s position as 50th in the nation among the states in their funding of academic research and development. They highlighted the lack of essential resources such as lab space and equipment, research assistants, and the oft-required commitment of state or private matching funds. They concluded that Maine would need to invest a minimum of $20 million a year in base-budget spending to significantly improve the university’s ability to compete for research funds. Although to many that seemed an extraordinary amount, it would only be enough to elevate Maine’s ranking among the lower tier of the nation’s research universities. Still, such an investment would have a major impact on the state’s economic diversity and condition.

Over the course of the 1996 and 1997 legislative sessions (encompassing the 1996 Maine House and Senate legislative campaigns), the Faculty Five met with a wide array of legislators, including several who were stepping into senior leadership and committee positions for the first time. Understanding the need for public support to augment their legislative advocacy efforts, Jacobson and his colleagues also traversed the state to speak before editorial boards, Rotary clubs, and chambers of commerce to raise awareness and interest.

Their message was received positively wherever they shared it. As Jacobson remembers, “There was no opposition. It was just that the case had not been made strongly and consistently before.”

The Bennett-Cathcart committee issued its report in February 1998, a little less than two years after the Faculty Five publicly launched its awareness and advocacy campaign. The report proposed a new entity named the Maine Economic Improvement Fund (MEIF), a state- funded allocation to the University of Maine System to support university-based research at UMaine and, to a lesser extent, at the University of Southern Maine. The fund was not designed to support research directly, but rather to provide the infra- structure and matching funds necessary to help faculty researchers compete for federal funds.

The law creating MEIF required the University of Maine System to partner with private enterprise, the federal government, and private and public research institutions to invest in applied research and development and to use those efforts in ways that would support the development of private enterprise. Through MEIF, the state finally invested in giving Maine’s research university the support to compete that other states had, for decades, been providing to their own research universities.

The full legislature approved an amended version of the committee’s report, initially allocating about $4 million for the 1999 fiscal year. It also okayed asking Maine voters to approve $20 million in borrowing to fund university and private-sector R&D. In November of 1998, voters passed the $20 million bond proposal with 62 percent support. In the years that followed, the Legislature and Governor asked voters on seven additional occasions to authorize additional borrowing proposals support- ing university-based R&D; Maine voters approved all seven. 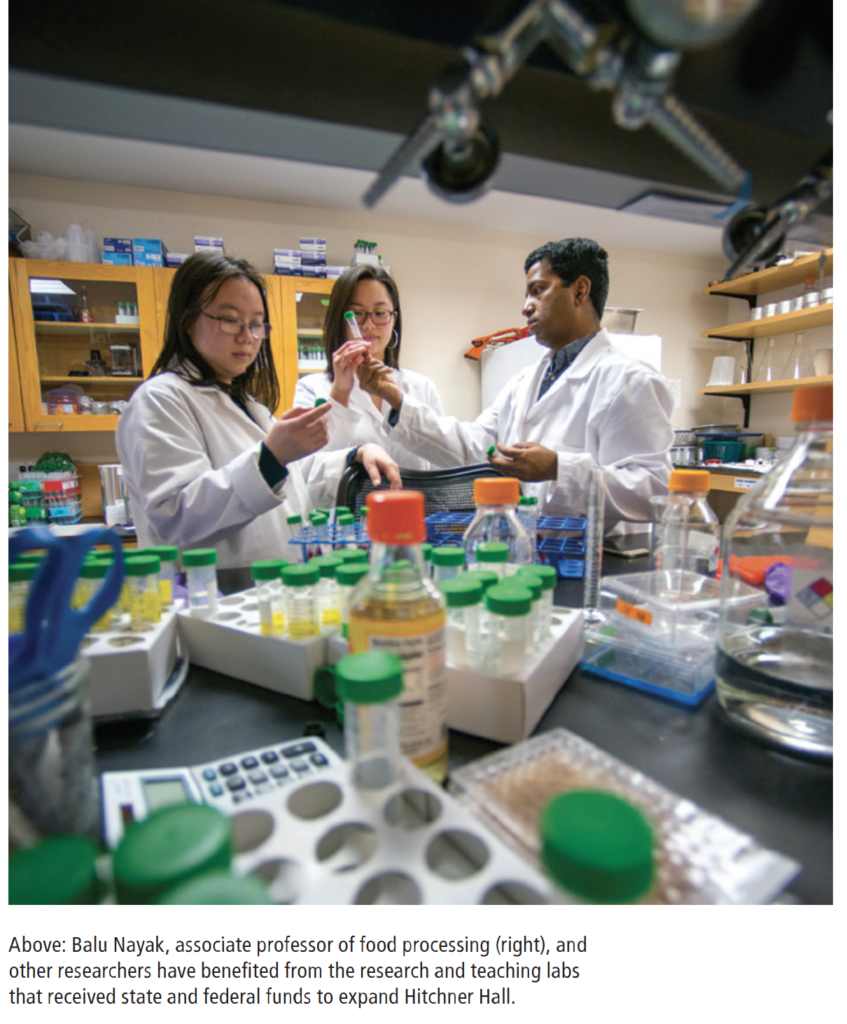 The Transformation of a University

TWENTY YEARS AFTER the establishment of MEIF, UMaine has used roughly $164 million in cumulative state appropriations to good advantage. As of 2016 university researchers had been awarded some 150 new patents and had brought in nearly $1 billion in grants and con- tracts to the state. The expanded research capacity continues to have major practical implications for Maine businesses, most of which are too small to conduct the R&D work themselves. In many cases, these businesses work and/or contract with UMaine faculty to develop innovative new manufacturing processes, to improve quality control, and to create new products. Since 1998 over 6,000 such R&D projects have taken place at the University of Maine.

The transformational impact of the Faculty Five’s grassroots initiative has not been lost on the university community. Annual spending on research at UMaine increased from about $25 million in the mid-1990s to about $120 million in 2016, putting the University of Maine in the top 100 of American public research universities. Faculty and students involved in R&D have helped hundreds of Maine businesses to find new products and processes. R&D opportunities have helped UMaine gain international prominence and made UMaine a stronger magnet for attracting under- graduate and graduate students.