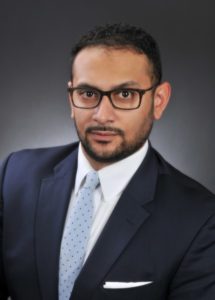 Abtin Mehdizadegan is an attorney and the youngest partner in the history of the law firm of Cross, Gunter, Witherspoon & Galchus in Little Rock, Arkansas. Since graduating from the University of Maine, he has achieved considerable success in the field of employment law and contributed to the betterment of his community.

Mehdizadegan has built a reputation as one of Arkansas’s foremost authorities on employment law, advising companies on employment policies and litigating cases in state and federal court. In addition to his law practice, he is an adjunct professor at the University of Arkansas at Little Rock School of Law, where he teaches an upper-level course on employment law to third-year law students.

His peers and the legal community have recognized his expertise and commitment, and he was appointed Commissioner of the Governor’s Commission on People with Disabilities. He was also named Top Attorney in Employment Law by Arkansas Life Magazine. In 2017 Arkansas Business featured Mehdizadegan in its annual “20 in Their 20s” series.

For his generosity in taking on pro bono cases, he was named pro bono attorney of the year in 2017 by the Volunteer Organization of Center for Arkansas Legal Services.

A 2006 graduate of Presque Isle High School, Mehdizadegan majored in political science at the University of Maine and was a student in its Honors College. He was active on campus as a member of Sophomore Owls and later as a Senior Skull.  Mehdizadegan also participated in Student Government and Greek life.

After graduating from UMaine in 2010, he enrolled in the William H. Bowen School of Law at the University of Arkansas at Little Rock (UALR). As a law student, he was published in the UALR Law Review and was later selected to become the publication’s editor-in-chief.