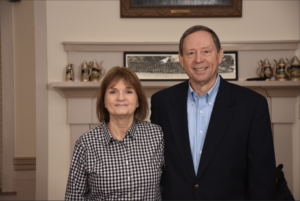 Few Americans have experienced Sierra Leone the way Allen ’73 and Patricia “Patty” Meyer Morell ’73 have. By their own estimates they have traveled to the West African nation more than 50 times since 2003 to support the Child Rescue Centre (CRC) in Bo City.

CRC serves about 500 children by providing for their educational, health care, and spiritual needs — key components of life that were disrupted or denied during the country’s devastating 11-year civil war. The fighting formally ended in 2002 but the economic and humanitarian consequences continue to this day.

Patty, a retired educator, and Allen, a retired U.S. Navy captain, have dedicated themselves to improving children’s lives in that war- and poverty-ravaged country. Thousands of individuals have benefited from the Morells’ commitment of time, talent, and treasure in Sierra Leone.

Among their many acts of direct involvement and philanthropy, Allen and Patty  were instrumental in the planning, funding, and construction of Mercy Hospital, a facility in Bo that opened in 2007 and which serves more than 10,000 patients each year. Later, in 2014, when an Ebola virus outbreak created a deadly epidemic in Sierra Leone and neighboring countries,  Allen and Patty volunteered their services, spending eight difficult months at the CRC compound in a self-imposed lockdown to limit any resident’s exposure to the virus.

The pair has also helped UMaine by establishing the Servant Heart Scholarship Program, developing robust opportunities for volunteerism on campus, and creating support for UMaine’s Engineers without Borders, and partnered with the Honors College and its students to provide solutions to real-world problems in Sierra Leone.

“Our relationships and our experiences in Sierra Leone have made a profound difference in our lives and our priorities,” Patty explained. Many in Sierra Leone no doubt say the same about the Morells.