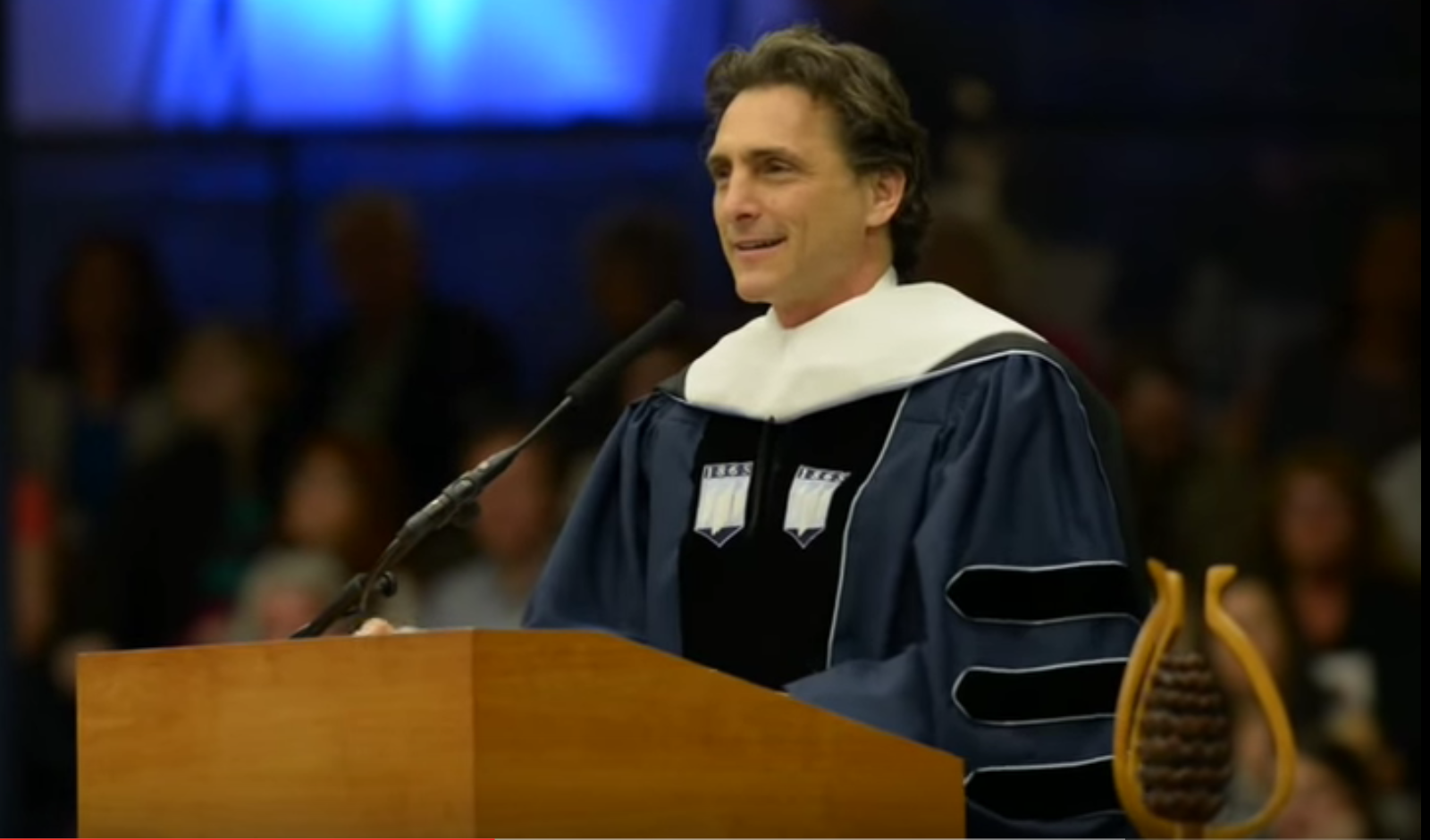 While Quentin Tarantino’s frequent collaborator, Lawrence Bender ’79, ’13 Hon L.H.D., didn’t collaborate on the latest Tarantino film, The Hateful Eight, the Hollywood producer has a number of projects in the works. He is currently working on a TV horror/thriller drama, “Through My Eyes,” which is based on a Russian series. The series revolves around the investigation of a mysterious death, with each episode featuring a different character’s perspective of the events.

And during a career tribute at last fall’s Deauville Film Festival, Bender mentioned a future project he wants to tackle—a musical.

“If I die without having made a musical, I will not be fulfilled,” he said.

Bender credits the opportunities that UMaine provided, his UMaine chemical engineering degree, and experience as a dancer and actor for his success as a film producer. In that role, he creates artistic work while solving problems. Bridging the arts and the business side of the business has yielded big results. The Hollywood producer’s work includes six Academy Award-winning films.

NYC to Orono and back

Bender, born in New York City and raised in New Jersey, pursued a degree in civil engineering at the University of Maine. Engineering was supposed to be a lucrative job field and his grandfather had done well.

But once in Orono, Bender began to dabble—different interests caught his eye as he studied civil engineering. “UMaine gave me the extraordinary opportunity to get a diverse education,” he says. “I was an engineering major, but I also got into dance and performance at the university. Both things help me now. I have one foot in art and one foot in business.” It seemed Bender was destined for the arts, and though he graduated from the university in 1979 as planned with his engineering degree, he moved to New York City and danced with the Ralph Robinson ballet company. But after sustaining several grueling dance-related injuries, he gave up his dance dreams and moved to Los Angeles to try his hand at acting.

Working on movie sets in L.A. allowed Bender to start making connections in the film world, but for a while he wasn’t sure quite where it would take him. Acting didn’t seem to be panning out. Through this uncertain time, Bender began to realize he was actually better equipped for producing. How did he arrive at that decision?

“Speaking in a funny kind of way, you would never say, ‘OK, I want to become a producer. I’ll get a degree in civil engineering, become a dancer, and then become a producer,’” Bender recounts to UMaine Today. “Um, no. However, I happened to have managed those two things and they are exactly what producing requires. It’s to be able to creatively tell a story and, at the same time, to solve all of the problems in order to tell that story.”

For Lawrence Bender, producing was the perfect fit he had been searching for. Bender has produced over three dozen films, including the star-studded Anna and the King, The Mexican, and Good Will Hunting. Perhaps most notable is his dynamic partnership with Quentin Tarantino—Bender has produced nearly every film directed by the groundbreaking cult-favorite including Pulp Fiction, the Kill Bill’s, and Inglourious Basterds. To date, Bender’s films have received 29 Academy Award nominations and won six.

Indeed, Lawrence Bender has remained active and engaged beyond the reaches of Hollywood. He is dedicated to various social, political, and environmental causes. Since 2005, Bender has acted as a contributing blogger for the Huffington Post and he now operates his own production company in Hollywood, Lawrence Bender Productions. Bender also sits on the board of trustees of the Israel Policy Forum and on the advisory board to the dean of Harvard’s John F. Kennedy School of Government. In addition, he is a member of the Pacific Council and serves on the board of Creative Coalition.

Perhaps his best-known brand of activism is his work with environmental causes.

When Bender witnessed a presentation given by Al Gore, he couldn’t help but think that it would make a great “I saw Al Gore’s slide show on climate change and while I was watching it, I had this idea of making it into a film,” Bender recalls. “People thought I was completely crazy, making a slide show into a film.” That crazy idea won Bender an Oscar for An Inconvenient Truth and resulted in tens of thousands of climate change converts. And Bender has been recognized

In a 2013 interview with the Portland Press Herald, Bender said, “The University of Maine gave me everything I needed to do what I do. There’s so much stuff out there, and when you’re in college, you’ve got to grab it and absorb it.” Today, Bender continues to do the very thing that launched his career back in the ’70s in Orono, Maine—he dabbles and constantly explores new and varied interests, continuing to produce hit films, involve himself in socially relevant causes, and serves as a role-model for personal and professional success.