Reflections on a Father Figure 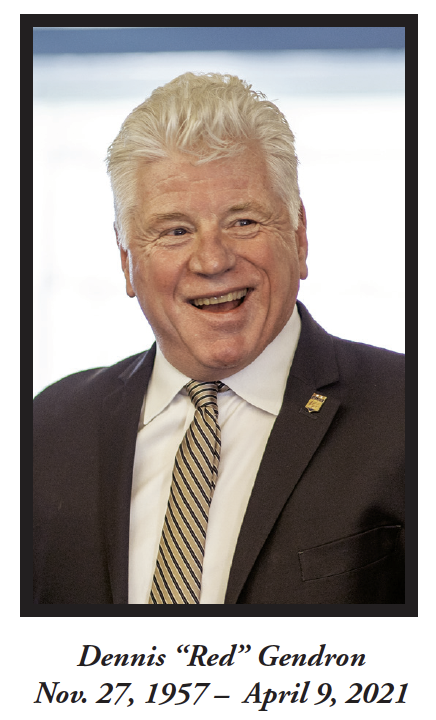 I FIRST SAT DOWN with Coach Red in 2013 at Tim Horton’s. He had just been named the new head coach at Maine. I was retiring from playing pro hockey and was excited to discuss becoming one of his assistant coaches at my alma mater.

I prepared for our meeting to talk hockey strategies, recruit-ing, and coaching philosophies. I had done my homework on him, which wasn’t hard to do. Coach Red coached for 42 years, and anyone who looks him up online finds a litany of success following him at every level. It includes four Vermont High School state titles, two NCAA Championships (including Maine in 1992-93), and capturing the holy grail of hockey, winning the Stanley Cup three times as a member of the New Jersey Devils organization. He also coached All-Americans, Hobey Baker winners, NHL all stars, and even Hockey Hall of Famers. I was expecting to talk about hockey. What I learned since then, and through the eight years I had the chance to work with him, is that it’s not about hockey.

I also had a book with me on that day. A John Wooden book given to me by 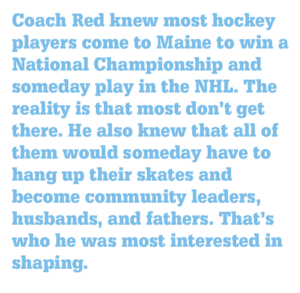 my college coach Shawn Walsh. If you’ve ever had a conversation with Coach Red, you know that’s all it took for the conversation to shift gears. We spoke about hockey for five minutes. We then talked for hours about our families and the different people that shaped our lives. But most importantly — we dove into Wooden, then into Patton and other books about great war generals I needed to read about, then into Mindset and how important that book was to the development of our players. We even talked about War and Peace and how it only took him a month to read it (sure). I left that first meeting with a series of books to read (still working to check all those o” the list) and life lessons that have been added on tenfold since that day. He had an insatiable thirst for knowledge.

COACH RED KNEW most hockey players come to Maine to win a National Championship and someday play in the NHL. The reality is that most don’t get there. He also knew that all of them would someday have to hang up their skates and become community leaders, husbands, and fathers. That’s who he was most interested in shaping. He treated our players like they were his own sons. Coach Red was blessed with a wonderful family. He and his wife, Jan, raised two beautiful and accomplished daughters in Allie and Katie. They also adopted 30 sons each year, all geared up in hockey jerseys. His family was ours. Miss Jan, as he liked to say, would open her home to all of our players and spend days cooking for 30 hockey players who wolfed down everything in 10 minutes. Thanksgiving, New Year’s Eve, or just a quick late-summer BBQ was commonplace at their home on Bangor’s Virginia Lane. It was about family.

Coach Red dedicated himself “to live in the service of others.” When Shawn Walsh hired him as an assistant in 1990, it was an opportunity that allowed him to work himself into a great coaching career. When he came back in 2013, it was about giving back to the hockey program that gave him so much. Founding and building the Grant Standbrook Forever Fund was his baby. The endowment was created to ensure long-term financial stability for the program. Coach Red wanted future generations of Maine players and coaches focusing exclusively on athletic and academic excellence instead of fundraising. He was so proud when the $1 million Tom Savage Challenge was met in 2019, but there is still a ways to go. He wanted to leave the program in a better place.

HIS VISION WAS to win a National Championship at Maine, leave the program in a sound financial position, and raise good men. Coach Red’s last win at Alfond Arena is the one to remember him by. We beat Providence 1-0 on Senior Night in a packed house. All-American and future Boston Bruin Jeremy Swayman ’21 got the shutout and the ‘M’ Club Dean Smith Award winner (given to Maine’s student-athlete of the year). Mitch Fossier ’20 scored the lone goal. That was a team on the verge of making the NCAA tournament but the pandemic hit the following week and ended the season. There were 23 Dean’s List players on that team. It was coming full circle. It was a team that Red had built the right way. $e culture was right, the right people were on board. After he shockingly passed on April 9th, Miss Jan found the prayer “Build Me a Son” by General MacArthur in his desk. Coaching a hockey team is like having 30 different sons with their own strengths and weaknesses, successes, and challenges. I can see Coach Red taking a peek at the prayer before each conversation he had with our players over the years. It wasn’t about hockey. It was about doing it the right way. It was about what kind of men he was raising. The wins will keep coming. M 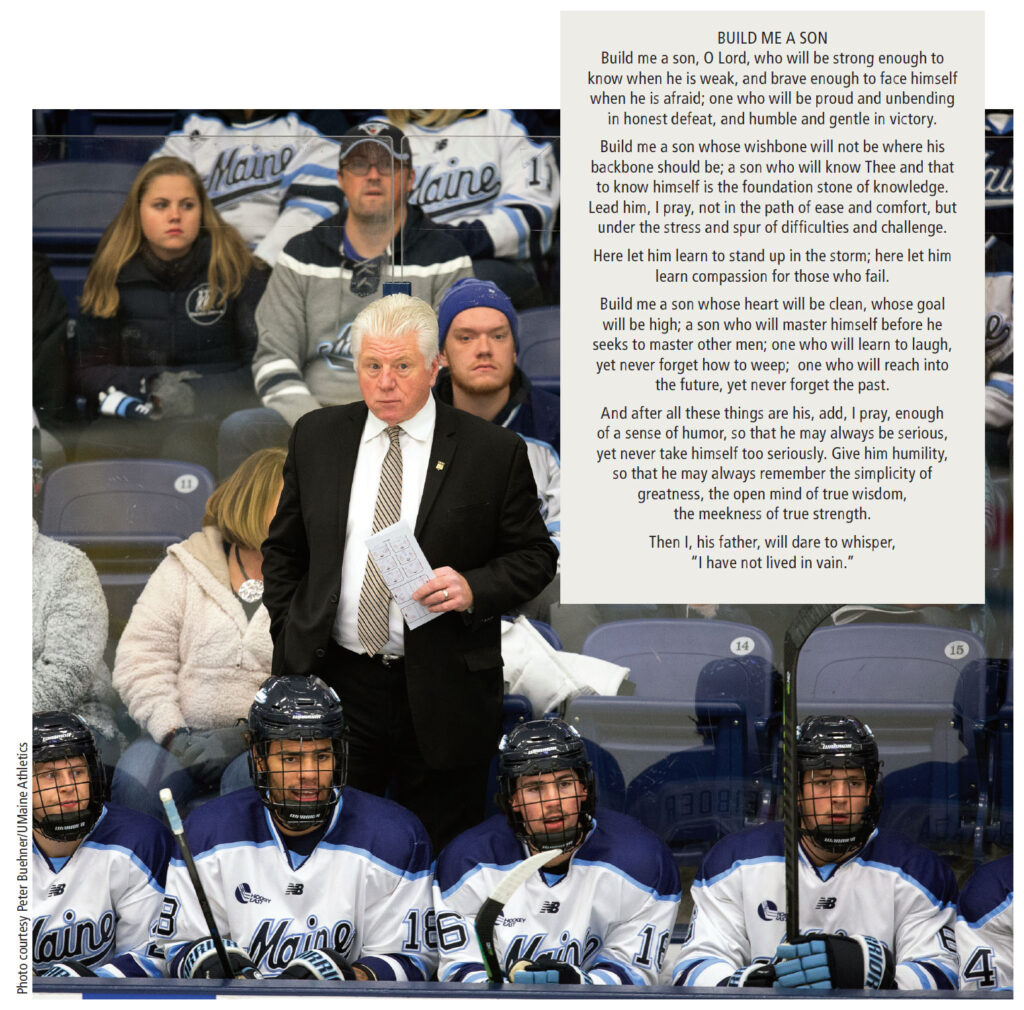