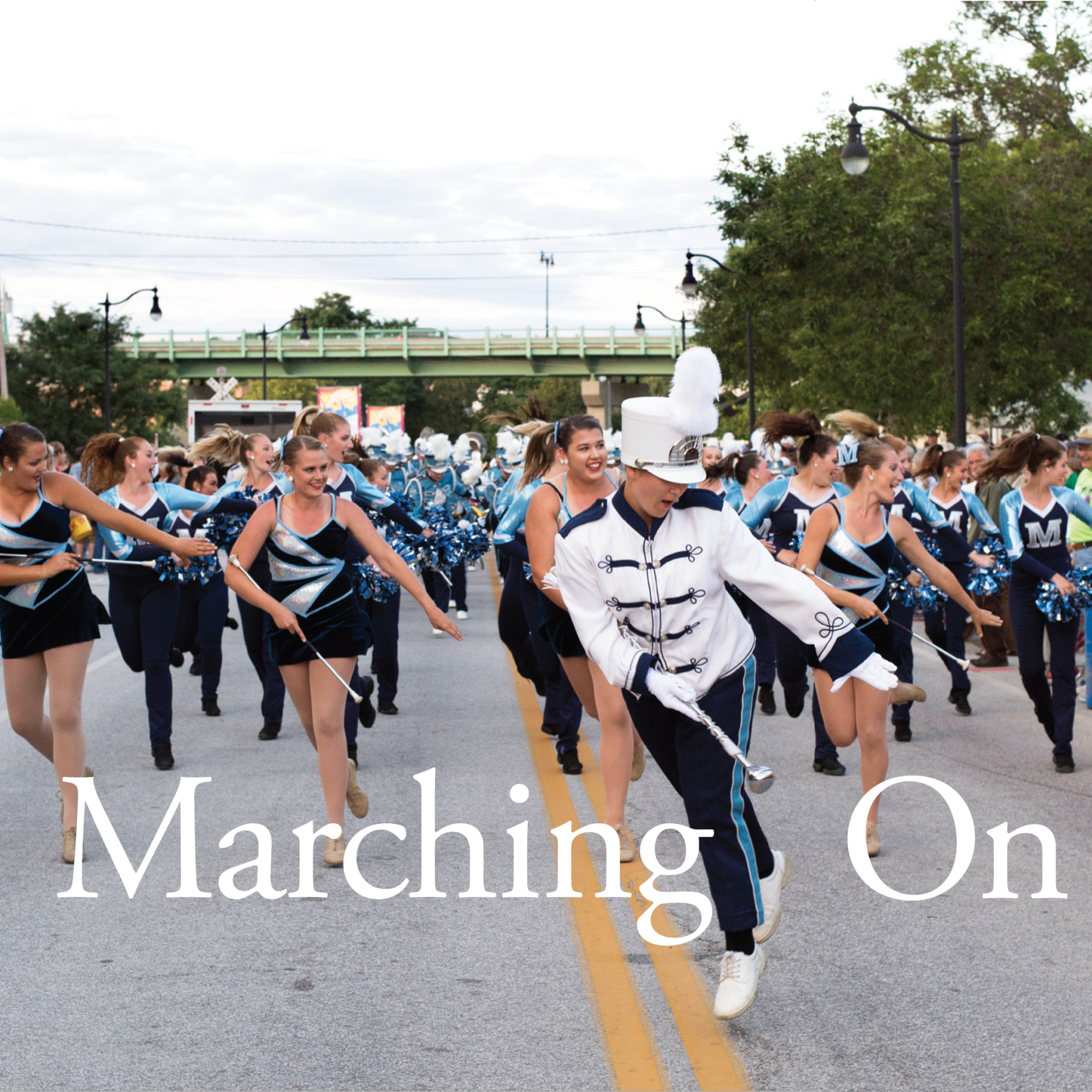 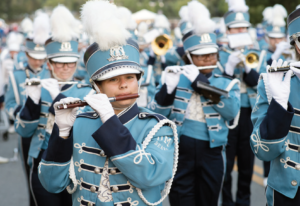 Christopher White ’94G points to a black and white photo hanging on his office wall. “Th at was my first band in 1992,” he says. “We had 54 students when I took over.”

Today, the number of University of Maine Marching Band members has more than doubled to a record 120 students. “We’ve had an almost 50 percent growth in the last five years,” says White. “The word is getting out about our programs and that’s wonderful.”

Ninety-one musicians, 21 dancers, five majorettes, and three drum majors make up this year’s group. “It makes it a show,” explains White. “It’s not just music, it’s moving, it’s visual; everything we do has something for everybody.”

“The growth of the marching band has been exciting to see,” says Emily Haddad, dean of the College of Liberal Arts and Sciences. “Band members have a special enthusiasm that shows in every performance and makes the marching band a truly unique aspect of campus life.”

“I’ve been doing band my entire life,” says Julia Waldron, a drum major and junior from Brattleboro, VT, majoring in early childhood education. “It teaches me so many different life lessons—how to be professional, self-disciplined, and a work ethic that I never would have had before.”

Jay Baines ’17, a civil engineering major from Hampden, has watched the numbers swell since he joined the marching band five years ago. “We had 88 members then,” he says. “We’ve grown in such a positive way.”

“One of the most significant areas of growth is our proportion of in-state to out-of-state kids,” says White. “We have a lot more out-of-state participants in our programs,” he adds, noting that in-state enrollment has stayed solid.

White credits several new initiatives on the University of Maine campus for the marching band’s growth spurt, including the Visual and Performing Arts Scholarship program, which began two years ago.

VAPA awards, as they are known, are $1,500 per semester for the selected students. They are renewable for up to four years of undergraduate study. Students must participate every semester in a musical ensemble and maintain at least a 2.5 GPA.

The scholarships were created by Joel Wincowski, the former vice president of enrollment management. “He noticed the marching band during his first weeks on campus two years ago and thought highly of the work ethic in the group,” explains Beth Weimann, chair of the Music Division in the School of Performing Arts. The awards are available for music and dance performance as well as majors in theatre and art.

“It was definitely a deciding factor for me,” says Katie Spagnolo, a first-year student at UMaine. “Because I participated in All-State and I’m a music education major, I was automatically qualified. When I found out my junior year at Thornton Academy that I was going to be able to get the scholarship, it made UMaine my first choice way back then.”

The marching band is one of six bands on campus. There are also two jazz ensembles, a symphonic band, concert band, and a pep band with more than 250 students participating in total. “We have a band here for every interest and every ability,” says White. “We are the only full-service Division One band program in the state of Maine. We’re proud of that.”

Students do not have to major or even minor in music to join any of the ensembles. “We have 50 different majors represented in the marching band,” says White. “Only 15 percent of them are music majors.”

Marching band members participate in a week of band camp prior to the start of school in the fall. After that, it’s 80 minutes, three times a week. Game days start with a two-and-a-half hour rehearsal first thing Saturday morning. The band then performs at the President’s House and the tailgate area of the Harold Alfond Sports Stadium. That’s followed by a pregame and a halftime show on Morse Field. After the game, there’s a “Follow the Tuba” traditional march back to Class of 1944 Hall. “It’s a full, full day,” says White. 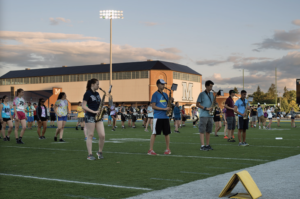 Courtney Evans graduated from UMaine in 2004. She played in the marching band for five years while earning her undergraduate degree in psychology. “I remembered going to football games with my grandfather as a child and being mesmerized watching the band march around the field doing their famous kicks and grunts,” Evans says. “I knew from that moment on that I wanted to play trombone and I wanted to be a part of the marching band.”

Evans is now the president of the UMaine Alumni Band, which boasts about 100 members reaching all the way back to the Class of 1957. Recently, the group purchased a much-needed drum major podium for the band through fundraising and donations. “We have also been working with the Alumni Association on an endowment fund for the Sports Bands, which has been a major project over the last two years,” explains Evans. 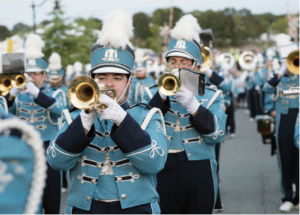 Each Homecoming, the Alumni Band is invited to join current players on the field for their pregame and halftime shows. “Our UMaine Alumni Band is the largest returning organization each year at Homecoming,” Evans says proudly. “We’ll show up in rain, sleet, even snow.”

“They say once you’re in, you’re in for good,” says Baines, who will complete his undergraduate degree in December. “We’re not here because we have to be; we’re here because we enjoy it. There’s a legacy here—we play a role in that and it’s pretty awesome.”