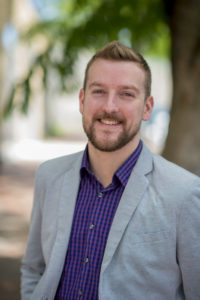 As an undergraduate, Brian Harris ’11 was engaged in a number of student leadership roles and activities. A psychology major who minored in music, Brian was elected President and CEO of Student Government for the 2010 calendar year, and in that capacity was an ex officio member of the UMaine Alumni Association Board of Directors.

In addition, his undergraduate days included selection to Sigma Phi Epsilon fraternity, Order of Omega, UMaine’s Interfraternity Council, and the Senior Skulls honor society, the prestigious group of fourth-year UMaine students whose purpose is to “promote the values of friendship, obligation, academics, dignity, and the standards and traditions of the University of Maine.” Brian also played in the Fighting Black Bears Marching Band, Pep Band, and other campus-based musical groups.

During his final semester at UMaine, he spent three weeks attending alumni events around the United States on behalf of the Alumni Association, sharing his perspective about life on campus and the value of his UMaine education.

All of those activities primed him for a volunteer role as an effective alumni ambassador. He and his wife, Stacey ’11, have been regular attendees at alumni functions in Maine and Massachusetts. Brian also has been a valuable resource to UMaine’s Office of Enrollment Management, attending student recruitment receptions to share his UMaine experience with prospective students and their family members.

Brian fits all of this in despite considerable domestic and international travel related to his professional work. Brian is the co-founder and CEO of MedRhythms, a neurologic rehabilitation company based in Boston. The company works to restore the quality of life of individuals who have experienced brain injury and other neurological diseases and conditions. Brian is well known and respected as an expert in this field.