Jennifer Ferguson Desmond ’14 and Jeff Rogers ’16 were recently honored with the Alumni Association’s Rising Star Award. The award recognizes individuals, who, in the years immediately following UMaine graduation, demonstrate outstanding commitment to advancing the strength and success of the Alumni Association, their alumni class, alumni chapter, and/or Alumni Interest Group.

This video honors Jennifer Ferguson Desmond ’14, who has a history of mentoring UMaine 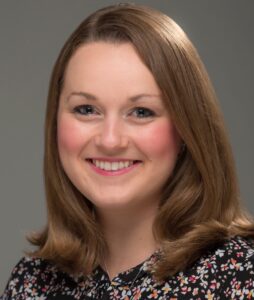 students and alumni.  She previously served as the public relations chair of All Maine Women, UMaine’s Honor Society of distinguished female leaders and scholars, and is advisor to that group’s current class.

Desmond has worked for The Honors College, as assistant director of Admissions and Student Ambassador Programs, and is currently coordinator for leadership development in the Undergraduate Student Affairs Office.

The Alumni Association thanks Penobscot Financial Advisors for sponsoring this 2020 Rising Star Award.

Jeff Rogers ’16, the second recipient of the 2020 Rising Star Award, is featured in this video.

Rogers was recognized by the UMaine Alumni Association for his work as president of Black Bears of Portland and his help with the Alumni Chapter of Southern Maine.

An advocate and supporter of UMaine, Rogers has increased both the membership and activities of the Black Bears of Portland, and established the group’s scholarship. That fund will award its first $900 to a rising UMaine senior this academic year.

Thanks to WBRC for sponsoring this 2020 Rising Star Award.