ORONO—The president and CEO of the University of Maine Alumni Association has announced his plans to retire at the end of June following seven years leading the organization. 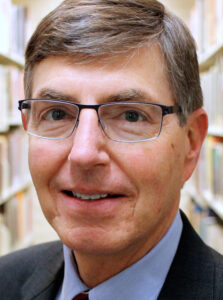 John N. Diamond `77, `89G began his tenure as the Association’s leader in 2015. In that role, he directs the independent organization’s efforts to engage alumni and advocate for public and private support for UMaine. However, the 67-year-old Bangor native and Blue Hill resident has worked for and on behalf of UMaine in several capacities over three decades.

Diamond first joined the university in 1989 as assistant professor of journalism and mass communication. In 1992 he was appointed UMaine’s director of public affairs, a position he held for ten years. He became the University of Maine System’s executive director of external affairs in 2002.

“John joined us at a time when the board was exploring new ways to expand the Association’s value to its members and to UMaine,” said Rob Frank `88, chair of the Association board. “He has provided great leadership and has significantly contributed to our organization’s advancement and reputation.”

Julia Munsey `02, past chair of the Alumni Association’s board of directors, is leading the search committee assigned to identify Diamond’s successor. KMA Human Resources Consulting of Falmouth is assisting the committee.

“The search committee is pleased to be working with KMA on this important search,” Munsey said.  “John is a great leader and leaves big shoes to fill.

“We are committed to finding the next great leader for the future of the UMaine Alumni Association and continuing our work on behalf of the University of Maine, UMaine Foundation, and our 110,000 alumni worldwide,” she added.

More information may be found here.