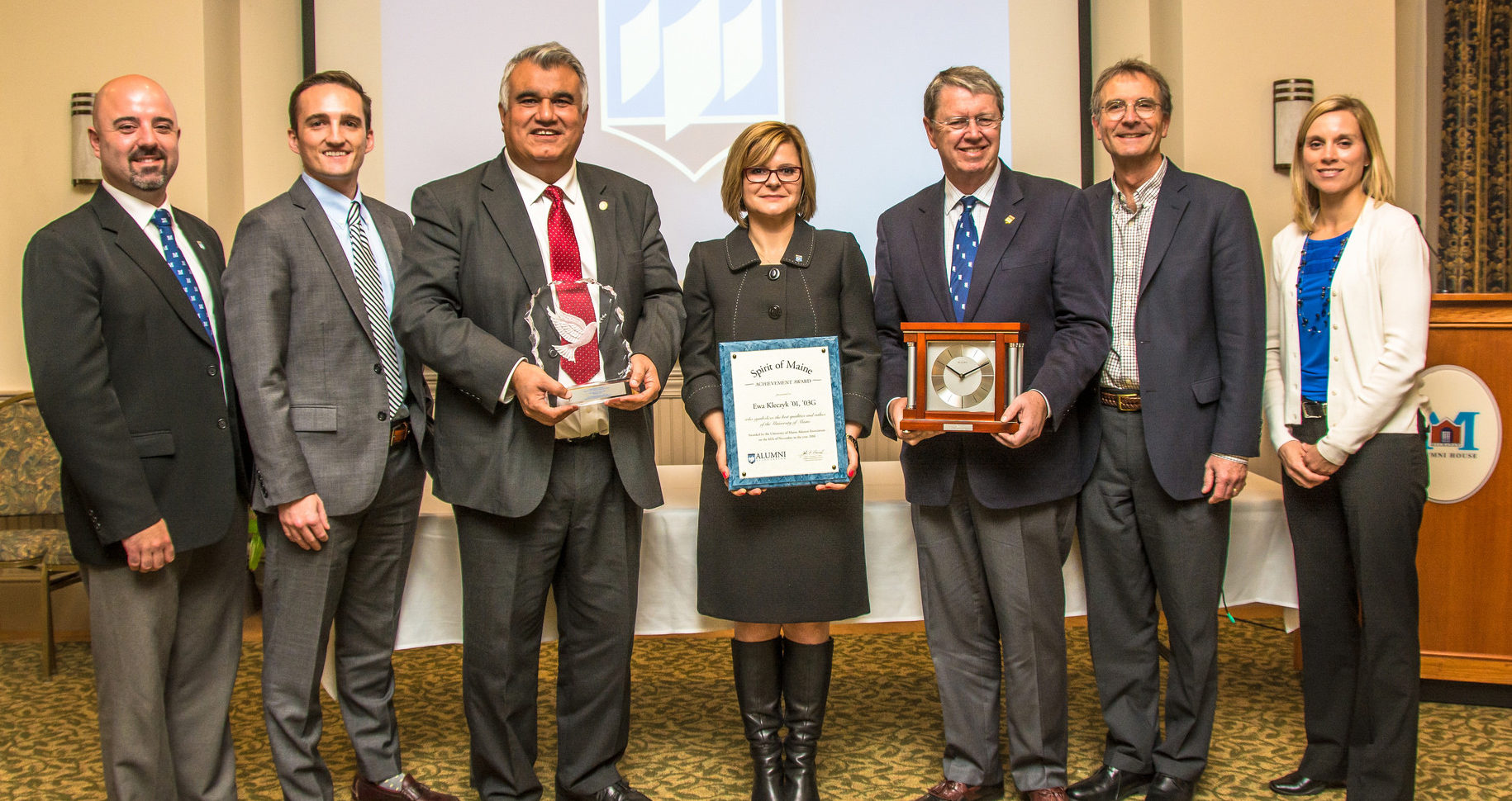 The University of Maine Alumni Association honored three outstanding alumni during an awards ceremony at Buchanan Alumni House on November 5.

Bronson, a 1969 UMaine graduate, has worked at all levels of the medical field to improve the delivery of care to patients. As a physician, researcher, professor of medicine, and president and CEO of the Cleveland Clinic Community Hospitals and Family Health Centers, he has dedicated himself to improving access and making medical care better for patients everywhere.

“Dr. Bronson has distinguished himself as a medical educator, an academic physician with a focus on quality of care and patient-centered health and prevention, and a leader in a large health care system that is a model for integrated medical care in the country,” said colleague Phyllis A. Guze, M.D.

Bronson is past president of the American College of Physicians and has served in various capacities with the American Medical Group Association and the American Medical Association. A native of Bath, ME, he has been recognized as one of the “Best Doctors in America” for several years, and was honored as a “Living Legend” and “Cleveland Father of the Year” by the Center for Families and Children.

Dr. Mian Riaz ’92 Ph.D. received the Bernard Lown Alumni Humanitarian Award in recognition of his service to humanity. The award is named in honor of Nobel Laureate Dr. Bernard Lown, a UMaine graduate who has devoted his life to world disarmament and the advancement of human health. Past recipients include Dennis Rezendes, who pioneered the hospice movement in the U.S., U.S. Ambassador Pamela Murphy White, and human rights lawyer Arthur Serota, who has led a movement to end child soldiering in Uganda.

Dr. Riaz of College Station, TX, is an internationally renowned expert on food processing who directs the Food Protein Research and Development Center at Texas A&M University. He has demonstrated a commitment to sharing his expertise with people in the developing world, coordinated numerous international workshops and symposia related to the use of extrusion technology, which can help to reduce food insecurity, and worked to improve the nutritional quality of foods for people as well as feed for animals and aquaculture.

“The communication of his research findings to others so that people around the world can benefit from the results of the work,” is perhaps his greatest contribution, offered Richard Clough, Head of the Extraction and Protein Technology at Texas A & M University. “The tremendous depth and breadth of his involvement in international scientific endeavors and active involvement in the exchange of ideas in food science and technology” has contributed to food science around the globe.

The Spirit of Maine Achievement Award was presented to Dr. Ewa Kleczyk ’01, ’03G. The award recognizes an individual who graduated from UMaine within the last 15 years and whose accomplishments, commitment, and initiative in a profession, business, or public service arena reflect the university’s high standards and vitality. Previous recipients work in such varied fields as archaeology, space exploration, theatre, and international relations.

A native of Poland, Dr. Kleczyk received the award for her successful career in the pharmaceutical marketing research field. As a young professional, Kleczyk has been recognized as a rising star, providing data, analysis, and other aspects of the pharmaceutical industry, and has received numerous awards and recognition. She was named a Top Female Executive in 2015 by the International Women’s Leadership Association and received a Top Five Business Women Award from the New Directions Chapter of the American Business Women’s Association. Kleczyk is also a dedicated and passionate mentor, and offers guidance to young people, both in her field and to students.

“The real power of Ewa lies in her desire to drive the industry forward, not just her own career,” noted Patrick J. Howie, executive director of Merck & Co and general manager of Comsort. “Her achievements have been frequently recognized within the industry and she is a consistent presenter at the leading industry conferences.”