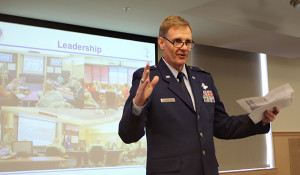 The inaugural Black Bear Leadership Summit was held Friday, February 26, at Wells Conference Center. The program, “Leading with Passion,” featured five speakers; each presented his or her unique perspective on leadership roles and skills. The event also offered workshops in which attendees could work with business professionals.

The summit, organized by the Golden Key International Honour Society and the Sophomore Owls, provided students and participants with an opportunity to gain leadership skills and hone real-world management techniques.

“We hope attendees grasp that leadership is not a position up here; it’s everybody. If we don’t realize the leaders in ourselves, we can’t move forward,” said Kathy Hill ’16, Golden Key member and event co-emcee. 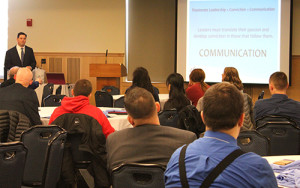 The two workshops offered were “Professionalism and Networking in a Digital World,” hosted by Sam Kunz ’14G of the UMaine Career Center, and “Managing Group Dynamics,” hosted by Nicole Gogan, deputy director of economic development for the City of Brewer.

“This event is fantastic. It was started by students who showed initiative in creating intentional opportunities. It’s an experience to draw from a strong group of students,” said Gogan, a UMaine alumna who earned her MBA in 2011. “After I graduated, I missed the energy here, so when I got the opportunity to come back, I jumped on it,” she added.