When rural Montana native Ryan Stovall ’18 was 13 years old, his curiosity about different types of poetry was piqued and the poems didn’t all come from school assignments. You could find Stovall reading Dante’s Inferno, a 14th-century poem.

Stovall has written poetry for years and his first book, Black Snowflakes: Smothering A Torch, was published in November 2022. It addresses the life of a veteran, and how civilians can approach difficult conversations with a better understanding. 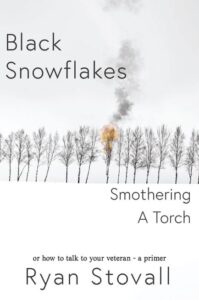 Stovall is a former Green Beret and has been awarded two Purple Hearts. Growing up, Stovall said there wasn’t much to do in his hometown. One could enter college, enroll in the military, or work in the woods. During college, Stovall wrote more poetry; however 9/11 occurred and he wanted to fight for his country.

“I tried the college thing first, I literally just tried and after about three years 9/11 happened.”

“I finished up my last year and went into the military. I felt that it was something that needed to be done and I thought that in some small part I could contribute to the effort,” said Stovall.

Stovall served in different countries all over the world. He returned to the states after completing a mission in Pakistan on Aug. 3, 2016 and began his studies at the University of Maine three and a half weeks later. Adjusting to life in the states came with many challenges.

“You’re going from a very threatening and hostile environment where you have to be hypervigilant and you’re always alert and you’re constantly anxious, to a place where those states of being are less than helpful,” Stovall added.

Stovall continued to write poetry while studying at UMaine. His civilian and academic experiences helped him realize he wasn’t alone with the trauma he had faced in the military. It was his turn to add to the supportive environment in the UMaine veteran community and also help civilians understand what veterans feel as they return to what we view as ‘normal life.’

Footnotes on the bottom of each page provide opportunities for  readers to place themselves in the writer’s shoes. Stovall understands that each reader will perceive his poetry differently, however his footnotes aren’t mere facts for the reader. 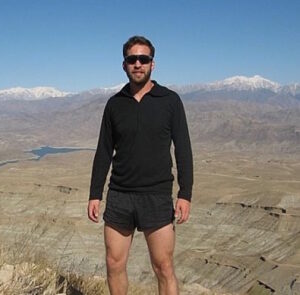 “The footnotes are very specific with given times, dates, and locations. That lends a sense of nonfictional element to it but when I offer that much specificity in the footnotes I want people to start thinking ‘oh this really happened’,” Stovall expressed.

Stovall hopes readers will question where they were at the time of the event discussed in the poems. This could create more understanding and distinguish the differences in both the veteran and civilian experience during that time.

When it comes to the ‘why’ surrounding his work and publications, Stovall made it clear that helping others makes him feel good. However, these difficult conversations expressed in different ways became a need in order for Stovall to thrive and stay at his best. A need he knew others desperately needed.

“I recognize the need for community amongst veterans or among any group. It’s hard to feel like an isolated individual, so I’ve fostered a sense of community everywhere I’ve gone. This was just one more example of that,” said Stovall.

You can read more about Ryan Stovall here and you can find his book on all platforms.