The Campbell Trophy nomination Eric D. Lee ‘10 received as a student was an honor forgotten, until he received a surprising email invitation to the 2022 Campbell Trophy Summit. As an attorney for Florio Perrucci Steinhardt Cappelli Tipton & Taylor out of Phillipsburg, NJ, Lee naturally questioned the legitimacy of the email. After some digging, Lee understood he was invited to one of the most prestigious football summits in the country.

The William V. Campbell Trophy is awarded by the National Football Foundation to acknowledge stellar achievements made by student-athletes who’ve performed exceptionally on and off the field. 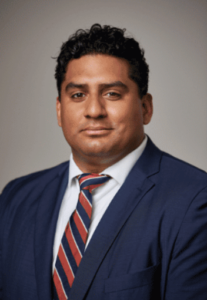 Lee transferred to the University of Maine in fall 2007 to complete his junior and senior year after attending Dean College in Franklin, Massachusetts. Intending to continue his football career on the defensive line, Lee made a short visit to Orono prior to committing. His recruiter at the time warned him that a vicious snowstorm was making its way to Maine and if he didn’t want to be stuck, he needed to delay his trip by a day. Lee left as a prospect escaping the snow but he came back as a UMaine Black Bear.

“I enjoyed my time at UMaine, it was the right environment for me. They had a great football program, a strong conference, and great exposure. Going from a small junior college to a university, I was a little nervous but I did very well academically,” said Lee.

He performed even better on the field, recording phenomenal stats throughout his career. This led Steve Abbott, UMaine’s sports information director at the time, to have an important conversation with Lee, one that led him to his nomination for the Campbell Trophy.

“I want to say it was either in the fall or the spring of my senior year when the sports information director came up to me and said, ‘there’s an award I’m going to nominate you for.’ I don’t remember him telling me what it is or what the name of it was but he said, ‘I think you’d be a great candidate for it’ and that’s all I remember. So until I got that email from the Campbell Trophy Summit, I completely forgot that I had any conversations about any award,” said Lee.

Each nominee for the award must be a senior or within their graduating year, average a GPA of at least 3.2 on a 4.0 scale, have outstanding football ability as a first team player, and demonstrate strong leadership skills according to the Football Foundation.

As he prepared to make his trip out to Stanford University, where the 2022 summit was held, Lee could only imagine what he’d learn and who he could connect with.

“When I went out there, it exceeded all of my expectations. I was surrounded by a bunch of former college athletes, football players from all walks of life, and all different divisions throughout the country. We all had the same common goal, we loved football, we did well academically, and we were successful in our own individual way. We were able to meet and really discuss all sorts of issues surrounding college football,” said Lee.

The summit is named after the late Bill Campbell, who was known as “The Coach of Silicon Valley.” Campbell was one of the country’s most influential business leaders, who formerly coached Ivy League football. The summit was created with the idea of connecting the world’s most prestigious CEO’s and COO’s with accomplished former student-athletes and providing tools for continued success.

Attendees heard from different speakers from around the country, including former Secretary of State Condoleeza Rice, who recently joined in on ownership of the Denver Broncos. Lee expressed his gratitude for attending the summit along with a few words of encouragement for current Black Bear student-athletes.

“Don’t be afraid to jump in and figure things out as you do it. Sometimes you just have to roll up your sleeves and jump in. Keep in touch with people and build relationships. People are always going to remember how you make them feel,” said Lee.