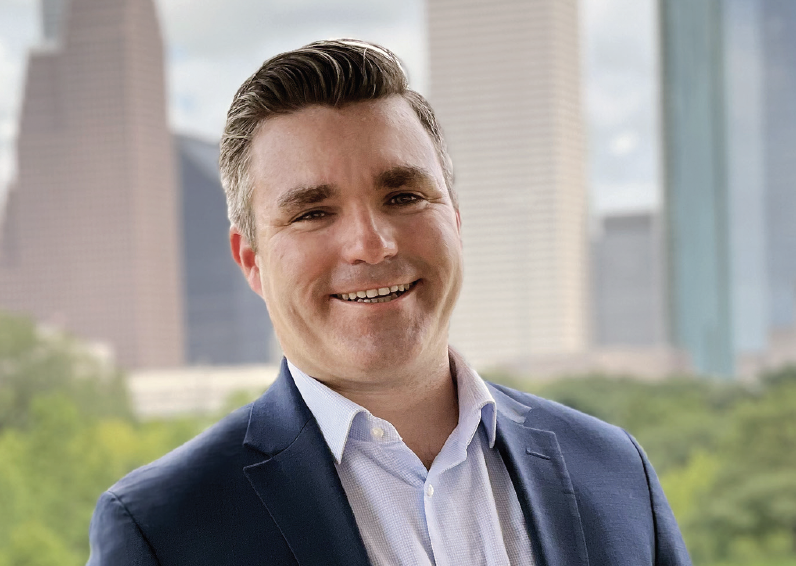 THE FIRST NEWS STORY written by UMaine student Ernie Scheyder ’06 was an interview for The Maine Campus with Emily Cain ’02, a 24-year-old UMaine employee who was seeking the first of what would become five terms in the Maine State Legislature. Last fall, he reflected on his career progression with disbelief as he literally stood in the shadow of then-presidential candidate Joe Biden.

It was quite a steep trajectory for someone who, in less than 15 years, went from covering campus events and local politicians to covering major world events and the soon-to-be leader of the free world. “Because I was part of Biden’s press pool, which traveled with him everywhere he went, I was able to walk right up to him as he finished talking to campaign volunteers,” Scheyder recalled. “My career arc — from The Maine Campus to the (Bangor Daily News) to standing in front of a major U.S. presidential candidate — was not lost on me in that moment. I was humbled and honored by the opportunity.” 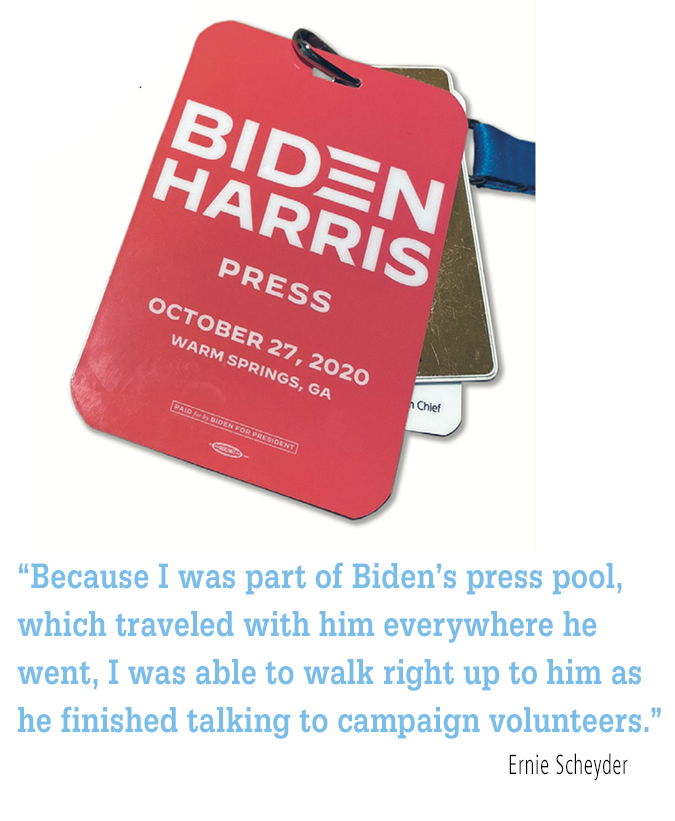 At 36, this journalist has plenty of choice assignments and adventures ahead of him. Scheyder grew up in Berwick, a town on Maine’s southern-most border with New Hampshire. Scheyder’s career has taken him all over the country, covering some of the nation’s most momentous stories, and has placed him in the enviable position of carving out a niche of expertise as a journalist focusing on energy.

Scheyder (pronounced SHY-der) has accumulated not only a hefty portfolio of by-lines but shelves full of awards after a dozen years at Reuters, the storied international news agency. He joined Reuters in 2009. From his New York City base of operations, Scheyder covered a number of world-riveting stories, including the Sandy Hook school massacre, Hurricane Sandy, and the Deepwater Horizon oil spill. 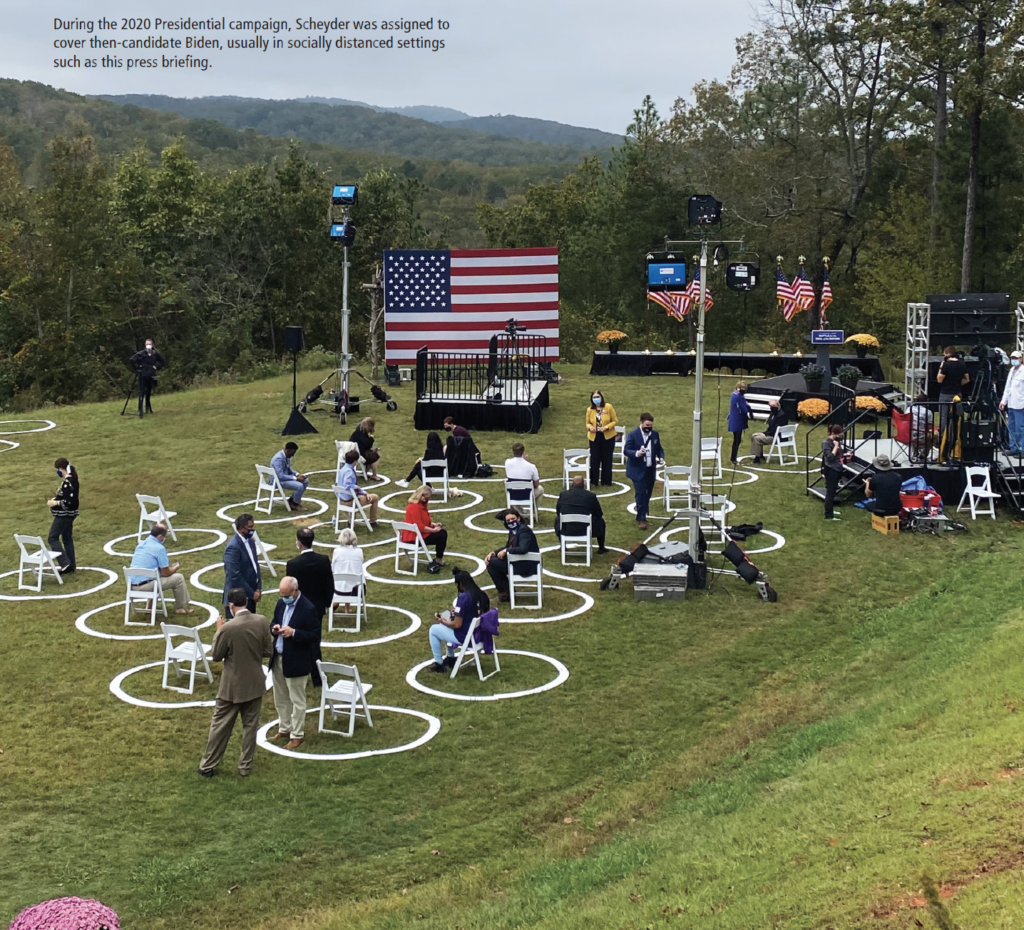 SINCE THEN, Scheyder has steadily moved up at the agency, solidifying his reputation as an energy reporter. He became a specialist in the coverage of fracking and North Dakota’s shale-oil industry before moving, in 2016, to Houston, the self-de-scribed “energy capital of the world.”

As Reuters’ national energy correspondent and deputy Houston bureau chief, Scheyder covered the major oil companies, reported from OPEC meetings in Vienna and elsewhere, and deepened his network of contacts within the industry. In 2018, he was promoted to his current position, Reuters’ Americas mining correspondent and deputy global mining editor. The post has allowed him to write extensively on the global electrocution trend, and the regulatory and political efforts to increase strategic minerals production.

Scheyder’s varied career, which also included stints as a business reporter for The Associated Press, a graphics intern at The Wall Street Journal, and as a copy editor at the Bangor Daily News, has given him a unique perspective on how Americans consume information – as well as how the journalism industry continues to evolve. While still at UMaine, Scheyder became one of many students in the pipeline feeding journalism students to the Bangor Daily News.

“Students wanted to learn, and Ernie was one of those young folks who was interested,” said Janine Pineo ’89, who hired Scheyder for a spot on the BDN’s copy desk while he was still attending UMaine. “He was willing to ask good questions and to learn the ropes.”

For Scheyder, it provided a foundation for his budding career. “I wouldn’t be the journalist I am today without that experience,” he said. “Copy editing taught me another side of writing and made my own writing better.”

Scheyder’s path to journalism began early, when he started his high school newspaper. “From a young age I learned to love to unpack complex topics and explain them to people.”

His love of information was both deepened and honed at the University of Maine, which he chose for both its reputation and its affordability. “I chose UMaine because I knew I would get a top-notch education at a price that meant I wouldn’t be saddled with decades of student loan debt upon graduation,” he said. “I’m conscious of the import that affordable public higher education means for the people of Maine and our country as a whole.”

WHILE IN ORONO, Scheyder became active in several campus groups, including Beta Theta Pi and as a tutor at the Writing Center. “My most-memorable experience at UMaine, though, has to be my time as news editor of The Maine Campus,” said Scheyder. “I loved running the section, collaborating with peers, and working until the early morning hours to polish the entire paper before we sent it to the printer.” Unlike many of his journalism peers, however, Scheyder majored in English so that he would have a writing-related outlet that wasn’t journalism-focused.

“Reading Chaucer and Shakespeare forced me to exercise a different part of the brain, which was stimulating,” he said.

After graduating from UMaine, Scheyder moved to New York City, earning a master’s in journalism from Columbia University in 2007. His pursuit of constantly learning more and bettering himself was noticed by those with whom he worked.

“Ernie was very curious, always looking for feedback and how he could’ve done better,” offered Philana Patterson, Scheyder’s editor at The Associated Press, and who is now an editor at The Wall Street Journal.

It has been this curiosity and hunger for both learning and sharing information that has driven Scheyder’s career. If some of the topics and titles might appear to some as dull and arcane, Scheyder has enjoyed success at illustrating how they affect the lives of everyday citizens.

For example, a June 2020 story on how then-President Trump’s visit to Oklahoma resurrected memories of the 1921 Tulsa race massacre began with this powerful opening: “Thirteen jars filled with ash and dirt and bone rest in the basement of Tulsa’s Vernon African Methodist Episcopal Church, an unsettled repose for the victims of a nearly century-old massacre that still haunts the Black residents of Oklahoma’s second-largest city.”

Another piece about a battle over copper mining in Arizona showed how policy decisions affect communities from varied, and often competing, angles. Countering the economic benefits that a rich copper deposit could have on a small struggling town, however, are concerns from conservationists and Native Americans, who consider part of the area as sacred. As Scheyder noted, “The complex debate is a harbinger of battles to come as the U.S. aims to build more electric vehicles, which use twice as much copper as those with internal combustion engines.”

this ability to explain complex situations and their aftereffects is one of Scheyder’s specialties, said Pineo, who has kept in touch with him throughout the years.

“He lets the story tell itself,” she said. “He’s doing it with such passion, but also with compassion.” For Scheyder, that’s precisely why he chose his field: “There’s a level of insight that you as a journalist have to bring to a situation,” he said. 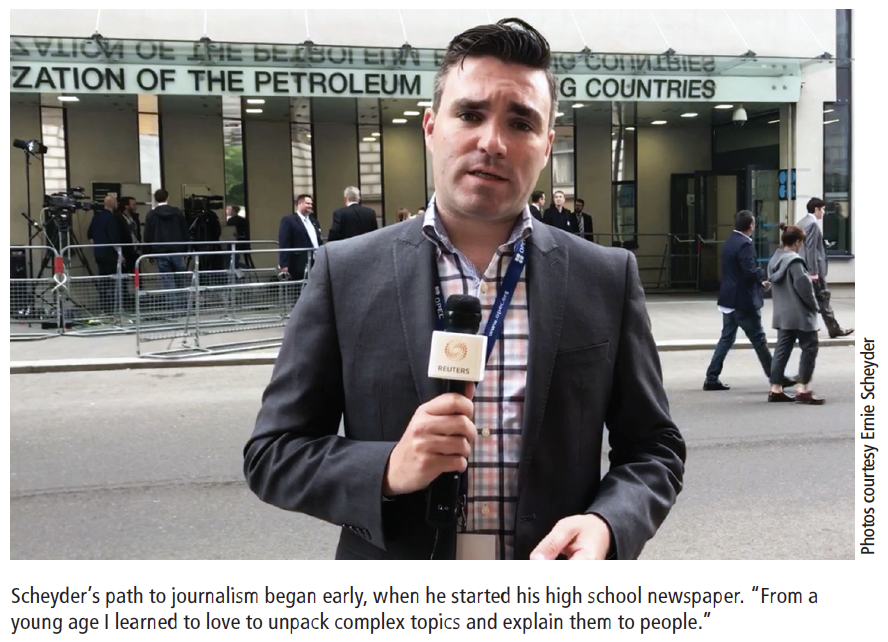 SCHEYDER HAS HAD to develop his skill set in ways none of his mentors ever had to. As a modern journalist in a multi-media profession, he researches and writes stories, shoots photos and videos, produces graphics, and appears on television and radio to further explain the issue he is covering.

Seizing new opportunities to learn and adapting to new situations is consistent with Scheyder’s approach to work, as it was to his educational pursuits at UMaine, according to one of his college mentors.

“His interests were varied and his intellectual and journalism capacity was huge even then,” said Dr. Robert Dana ’80, the university’s longtime dean of students and its vice president for student life and inclusive excellence. He described Scheyder as “ a delightful human being” and “amazingly humble,” qualities that complement the intensity and importance of the industry and issues he covers.

“His keen sense of the world is under-girded by a modesty and humor that is infectious,” Dana added. “He is a futurist and his interest and expertise in energy is never more important than it is today.” M