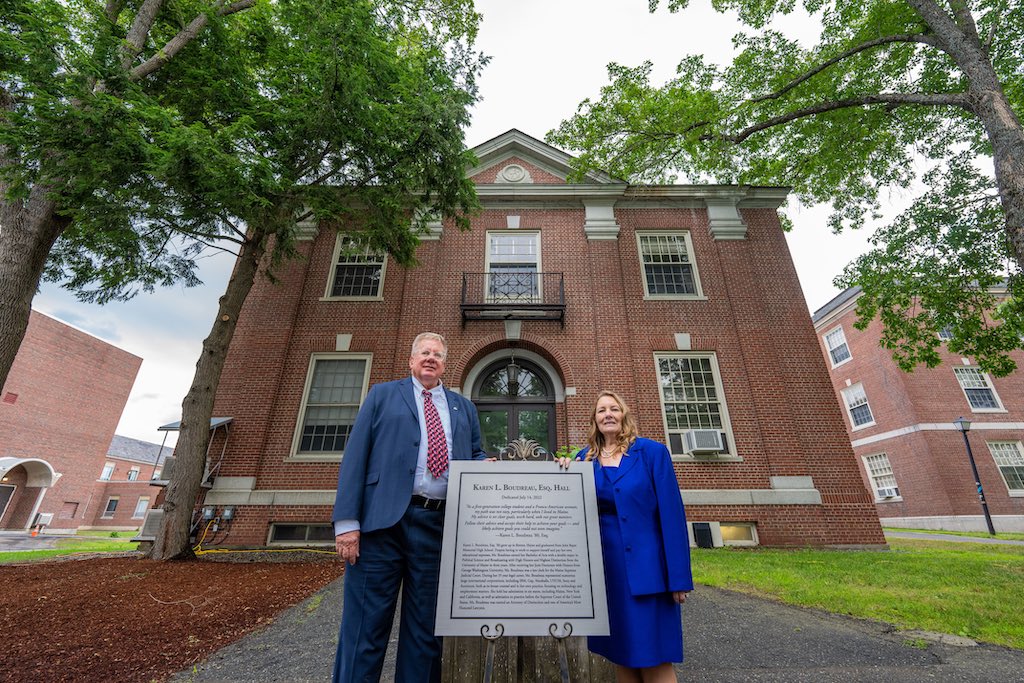 Boudreau and Jensen say they hope that naming this building for a French-Canadian woman will provide the confidence to women and those of French-Canadian heritage to pursue their dreams.

“As a first-generation college student and a Franco-American woman, my path was not easy, particularly when I lived in Maine,” Boudreau says, “I want those who follow me to understand that regardless of the hurdles put in front of you, success is very achievable if you set clear goals, work hard, and seek out great mentors.”

“Karen’s academic excellence at the state’s flagship university and her successful law career are an inspiration,” said UMaine President Joan Ferrini-Mundy. “For Karen to recognize her alma mater with such a gift also honors her Franco-American heritage and the value of public higher education in Maine. We appreciate the opportunity for generations of UMaine students to know her story.”

The gift will support some much-needed refurbishment of this nearly century-old campus space. Boudreau Hall is one of the iconic historic buildings that stands on the mall, at the heart of the UMaine campus.

Boudreau graduated from John Bapst Memorial High School in Bangor, ME. At UMaine, she worked to support herself and paid all her own expenses while pursuing a double major in political science and broadcasting. She graduated with high honors and highest distinction in three years in 1980. She was admitted to Phi Beta Kappa Society. After receiving her Juris Doctorate with Honors from George Washington University, Boudreau was a law clerk for the Maine Supreme Judicial Court.

In her 35-year legal career, Boudreau has represented numerous large international corporations, including IBM, Gap, Marshalls, UNUM, Sony, and Accenture, both as in-house counsel and in her own practice, focusing on technology and employment matters. She holds bar admissions in six states, including Maine, New York, and California, as well as admission to practice before the Supreme Court of the United States. Boudreau has been named an Attorney of Distinction and one of America’s Most Honored Lawyers.