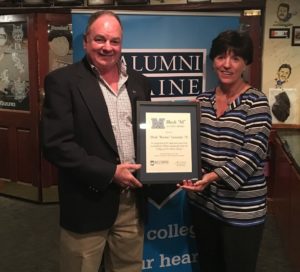 In recognition of Mark “Rookie” Letendre’s decades of outstanding leadership and service to his college alma mater, the University of Maine Alumni Association has awarded him the Block “M” Award, one of its most prestigious awards.

Letendre, a native of Manchester, New Hampshire, was presented the award on February 22 at an alumni event in Scottsdale, where he and his wife Judy now reside.

Currently Major League Baseball’s Director of Umpire Medical Services, Letendre had a successful career as team head athletic trainer for the San Francisco Giants, and was part of the team that won the 1989 National League pennant. Prior to joining the Giants, he served as an athletic trainer at the Major League and Minor League levels for the New York Yankees.

“Rookie has maintained strong ties to the University of Maine since his graduation in 1978,” said John N. Diamond, president and executive director of the UMaine Alumni Association. “He has been a leading force in building our network of UMaine alumni in Arizona, has been philanthropic in support of UMaine initiatives, and has been a terrific ambassador for the university wherever he goes. He sets a great example for all former, current, and future Black Bears.”

Each year a committee of UMaine alumni selects recipients of the association’s top awards based on dozens of nominations submitted. Letendre’s selection was based on his nomination by two members of UMaine’s Phoenix area alumni chapter: Donald Aldrich of Scottsdale and Prudence Pease Meader of Sun City. In their nomination of Letendre, they cited his character and integrity as well as his leadership and support as reasons why he deserved the award.

“I am humbled by this award and thank everyone involved in the awarding process. My learning experience at UMaine by quality educators, afforded me the necessary knowledge and skills to become a contributing member of the athletic training profession over my 40 year career in professional baseball.”