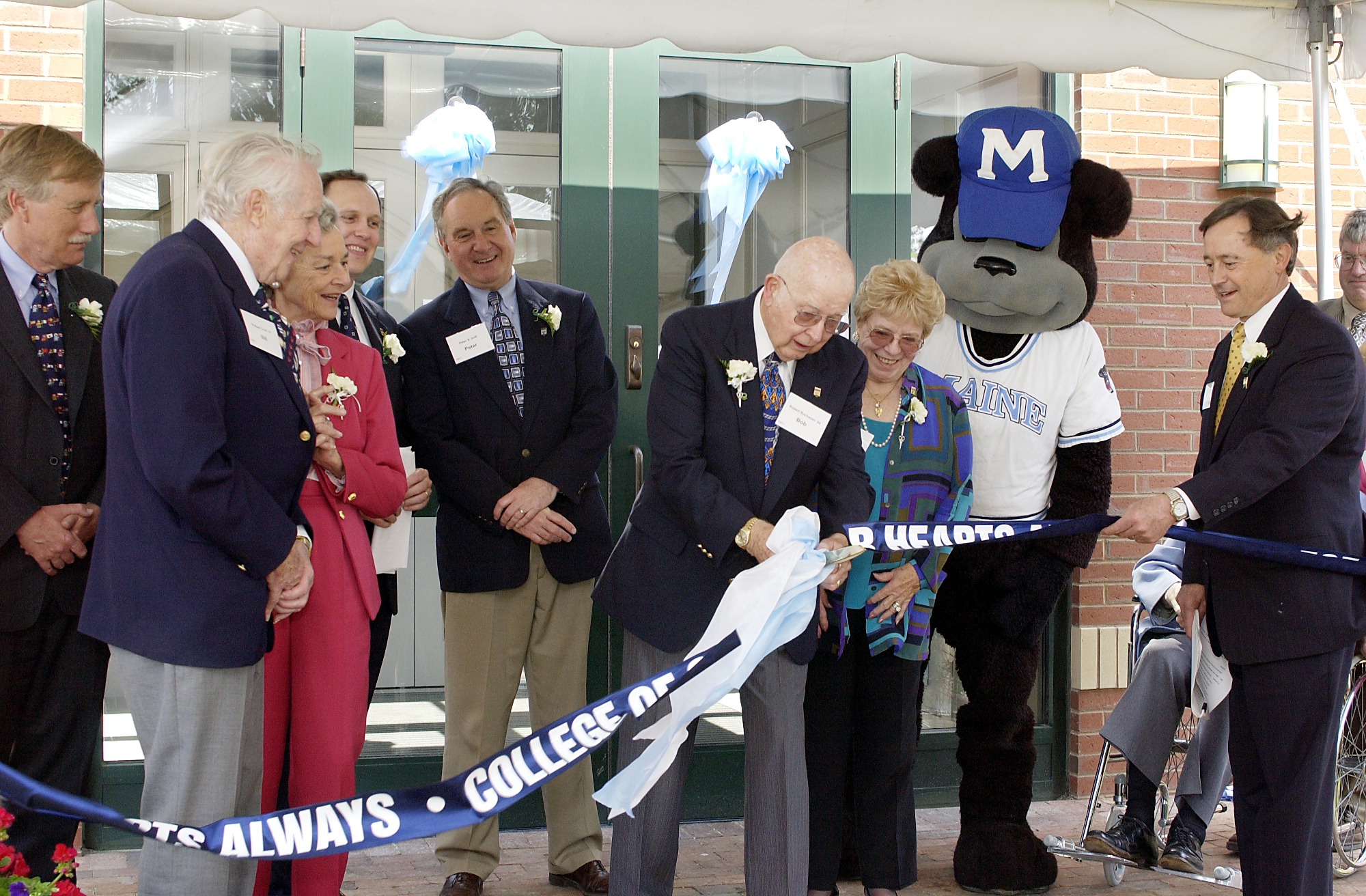 Dr. Robert D. Buchanan, above center, for whom the University of Maine’s Buchanan Alumni House is named, passed away on August 11, 2021, in Pueblo, Colorado, his home for the past 16 years. He was 99 years of age.

Born on May 8, 1922, Buchanan grew up in Caribou, where he graduated from high school in 1939. He went on to attend the University of Maine as a zoology major and was a proud member of the Class of 1944. After UMaine, he attended Tufts University School of Dental Medicine, from which he graduated in 1946.

Buchanan then joined the U.S. Army, where during his ten-year military career he practiced dentistry at a prison camp in the Philippines and later led a mobile dental unit near a combat zone in South Korea. He achieved the rank of Major during his years of active service.

Afterward, Buchanan established a private practice in Whittier, Calif., and was a clinical professor of operative dentistry at the University of Southern California.

During the course of his long life, Buchanan gave generously to numerous charities, his hometown church, and his university alma maters. In May 2002, Buchanan Alumni House was dedicated in his name. One of the most impressive and recognizable buildings on the UMaine campus in Orono, it was built entirely with funds raised by the UMaine Foundation and the UMaine Alumni Association. The building features meeting and event spaces that are widely used by alumni and members of the campus community as well as by off-campus organizations.

“More than any single individual, Dr. Buchanan made the construction of Buchanan Alumni House possible,” said Jeffery N. Mills, president and CEO of the UMaine Foundation and Buchanan’s longtime friend. “He was passionate about the project and its value as ‘a place to call home’ for students, alumni, and the community.

“One of the greatest joys I’ve had in life was working with him on the creation of Buchanan Alumni House as well as maintaining a close relationship with him for more than 25 years,” Mills added.

“Dr. Buchanan loved UMaine as much as anyone could,” said John N. Diamond, president and CEO of the UMaine Alumni Association. “The walls of his home in Pueblo were filled with art work and mementos related to the university. Until the pandemic arrived, he made a point to return to campus every May to celebrate his birthday and to meet with students at Memorial Union and at Beta Theta Pi fraternity house, where he lived during his undergraduate years.”

“I had the great pleasure to meet Dr. Buchanan shortly after I joined UMaine in 2018,” shared Joan Ferrini-Mundy, president of the University of Maine and its regional campus in Machias. “I found him personable and deeply committed to promoting and supporting UMaine’s mission and future. The most visible examples of that are Buchanan Alumni House and Class of 1944 Hall, the home of UMaine’s School of Performing Arts.”

Buchanan was preceded in death by his parents, Roy and Gertrude Buchanan; his half-brothers, Gerald and Donald Buchanan; his first wife, Maxine Buchanan; and his second wife, Pearlee Buchanan.

The UMaine Foundation and UMaine Alumni Association plan to honor Buchanan in May as part of the 20th anniversary celebration of Buchanan Alumni House’s grand opening.