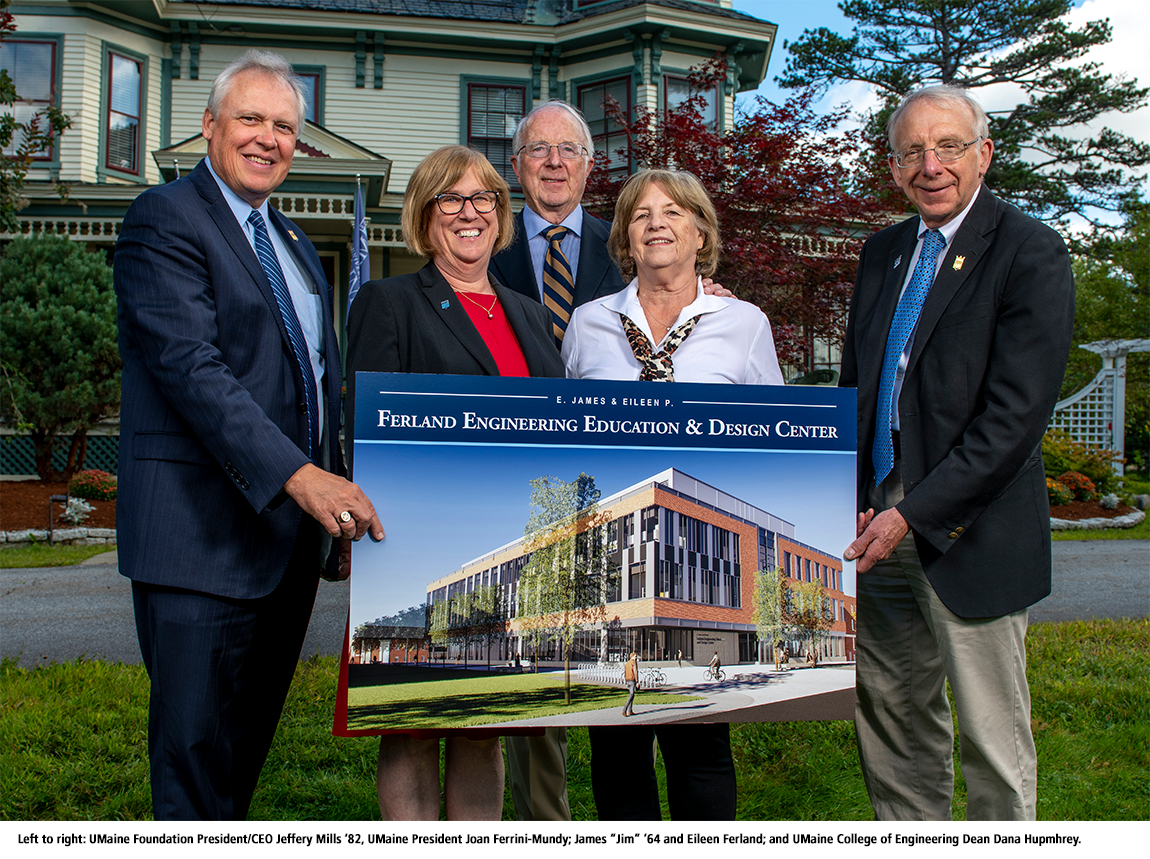 New Engineering Center to be Named After Jim and Eileen Ferland

The secret has been revealed: Skowhegan natives E. James “Jim” Ferland ‘64 and Eileen P. Ferland are the previously anonymous donors whose $10 million gift in March will help construct the Engineering Education and Design Center at the University of Maine.

The announcement was made by University of Maine Foundation President/CEO Jeffery Mills at the UMaine Alumni Association’s 2019 Reunion dinner Sept. 12 on campus, where Jim Ferland was celebrating his 55th class reunion. The Ferlands had agreed to allow their names to be revealed at the event.

The planned 100,000 square-foot facility will be named the E. James and Eileen P. Ferland Engineering Education and Design Center (EEDC). It will house the Biomedical Engineering Program and Department of Mechanical Engineering, as well as teaching laboratories for mechanical engineering technology, and provide space for all UMaine engineering majors to complete their senior capstone projects.

The Ferlands’ gift helped the UMaine Foundation set a record for giving totals — $17.4 million in private support from more than 350 individuals, corporations, and foundations. More than $66 million of the $75 million to $77 million project total has now been raised.

According to Mills, the Ferlands’ investment gave the EEDC fundraising campaign momentum, inspiring others to believe that “together, this project will be accomplished.”

“We are pleased to make a contribution toward improving the infrastructure at UMaine, and hope others will be encouraged to join in bringing this important project to the finish line,” said Jim Ferland.

University of Maine President Joan Ferrini-Mundy thanked the Ferlands and other UMaine alumni class leaders for their contributions, and also recognized the Maine Legislature’s critical $50 million investment in this important facility that will benefit Maine and its future workforce.

“The Engineering Education and Design Center will transform engineering education at UMaine and for the state, fostering an even more collaborative community of learners, teachers, and partners,” said Ferrini-Mundy. “This new facility will help fulfill a critical need by educating engineers for Maine and beyond, and it aligns with the University of Maine System plan for research and development.”

Jim Ferland received a bachelor’s degree in mechanical engineering at UMaine in 1964 and began his career as an engineer with the Hartford Electric Light Company, a subsidiary of Northeast Utilities in Connecticut. In 1967 he joined the initial operating staff of the Millstone Nuclear Power Station and in 1976 became station superintendent, the same year he achieved an MBA from the University of New Haven. He completed the Harvard Graduate School of Business Administration’s Program for Management Development in 1977 and shortly thereafter was named executive vice president and chief financial officer of Northeast Utilities. He became NU’s president in 1983.

In 1986, Jim Ferland was recruited by Public Service Enterprise Group (NYSE:PEG) as chairman, president and CEO, positions he held through retirement in 2007 — making him the longest-serving CEO in the industry. Jim and Eileen split their time between homes in Florida and Maine and enjoy boating and traveling with their son, daughter, and four grandchildren.

“UMaine needs to produce more engineers to solve our world’s most challenging problems,” said UMaine College of Engineering Dean Dana Humphrey. “The Ferland Engineering Education and Design Center will give UMaine the capacity to educate up to 3,000 engineering students, to meet the demand for our graduates from companies in Maine and beyond.”

Currently, UMaine engineering graduates have a 99% placement rate in careers or graduate school.

Groundbreaking for the Ferland Engineering Education and Design Center is planned in spring 2020, with anticipated completion in 2022.

Fundraising for the estimated $75 million to $77 million EEDC project continues, including opportunities to name spaces in the facility. More information is available on the University of Maine Foundation website.

The EEDC project is part of UMaine’s $200 million Vision for Tomorrow comprehensive campaign, which has raised over $182 million, led by the University of Maine Foundation.