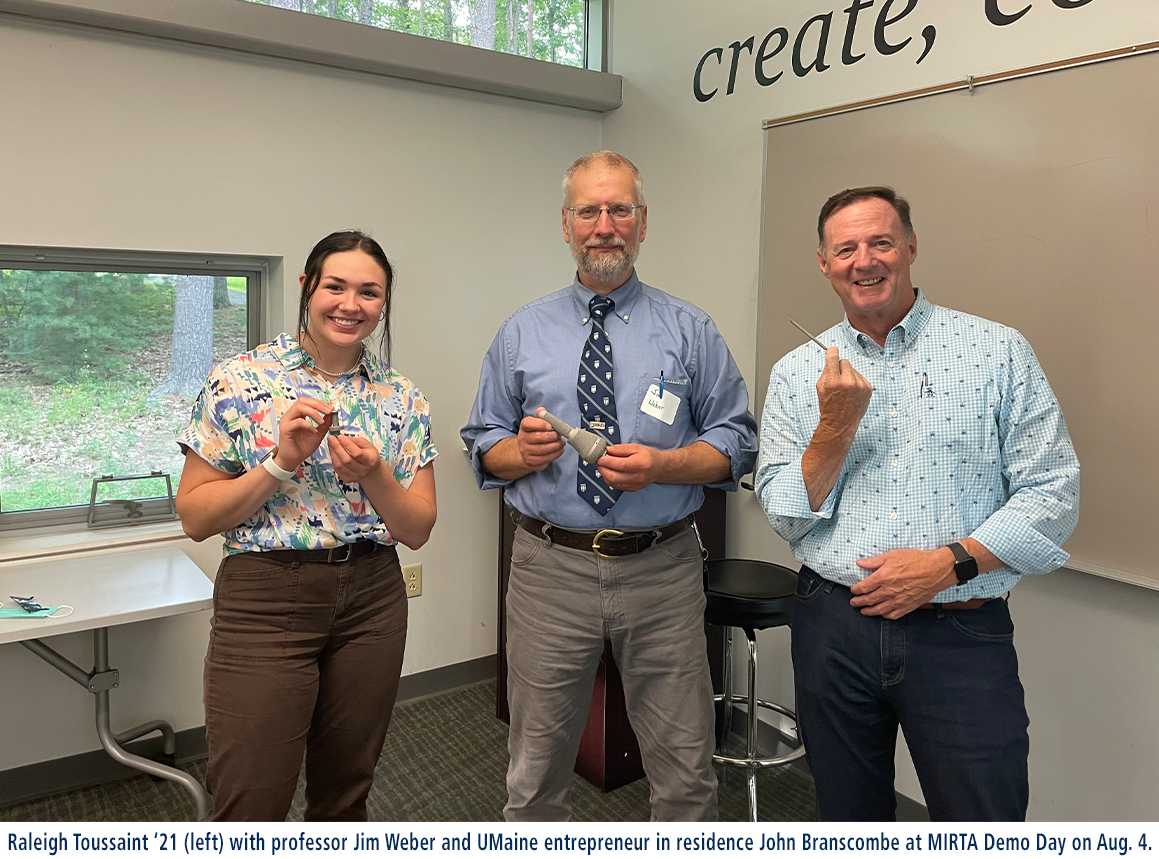 Black Bear alumni, faculty, staff, and students are among Maine’s most productive innovators and entrepreneurs. This month, Innovators of UMaine showcases Raleigh Toussaint ’21, a recent graduate who majored in animal science with a pre-veterinary focus.

In her senior year, Toussaint structured her capstone project around supporting a team of faculty members exploring the commercialization potential of surgical implants for veterinary and medical use. Dubbed “BioAnchor” and based on patented UMaine technology, the implants are additively manufactured from porous titanium and promote soft-tissue integration to form an infection-resistant “biological seal” in medical devices that penetrate the skin. The team exploring BioAnchor commercialization is led by associate professor of animal and veterinary sciences Jim Weber, who is also one of the technology’s inventors. Other members of the inventor team are orthopedic oncologist Ian Dickey, an adjunct professor at UMaine and chair of the external advisory board for the university’s undergraduate program in biomedical engineering; Anne Lichtenwalner, associate professor of animal and veterinary sciences and director of the University of Maine Animal Health Laboratory; and professor of chemical and biomedical engineering David Neivandt.

Touissant, who grew up in Madawaska, was a key member of the team that took part in two UMaine commercialization programs over the course of the 2020-21 academic year. In the fall, the team completed UMaine’s I-Corps site program, which guides researchers through the customer discovery process to better understand the potential markets for their inventions and provides funding from the National Science Foundation. Toussaint’s planning work during I-Corps informed the team’s path forward through Maine Innovation Research and Technology Accelerator (MIRTA), UMaine’s accelerator program that helps I-Corps participants build on their knowledge and move their ideas even closer to market.

Thanks in part to Toussaint’s efforts, BioAnchor is now significantly closer to commercialization and the inventor group has agreed in principle to form a startup company. After initially exploring an identification ear tag application in animals during the I-Corps program, they pivoted in MIRTA and are targeting approval for the device in the veterinary orthopedic market and the human surgical market. This month, Bear Tracks had a chance to catch up with Toussaint, now studying veterinary medicine at the University of Missouri, about her unique capstone project and plans for the future.

Tell us about how you got involved with this project and how you incorporated it into your senior capstone.

I first got involved helping Dr. Weber with a research project on pigs. He was conducting transcutaneous implant experiments, and I basically just took care of the pigs after their surgeries. I really liked working with him and when I approached him about my capstone he said ‘Well, we’re starting this program, and it won’t be a typical route, but do you want to do it?’ I decided to do it because it was just something totally different than what my classmates were working on. I’ve been in labs before, and it’s interesting, but in college I definitely enjoyed the hands-on classes more than the labs. So, that was appealing, and it was kind of a risk, like I had no idea what I was getting into. You can’t live your life without taking a couple of risks, and I think that was what really fueled me — I thought ‘Why not?’ In the end, I definitely am glad I made the decision to go a more applicable route instead of so hard science.

How did it all work and what was your role on the team?

The way the senior paper works in my major, in the fall you work on a proposal and in the spring you go ahead with the actual project. So, in the fall, I focused on what we were doing in I-Corps. At the time, we were exploring the ear tag application, and I focused on our overall approach to the interviews, how we wanted to do them, how we wanted to quantify them. In the spring, we were sending out large scale surveys, and so I really focused on the results. And because we had pivoted away from the ear tag application, I wasn’t even in animal science anymore, I was in human medicine! We did get to speak with a couple of [orthopedic surgeons] one-on-one before I graduated, so I was able to include that. We didn’t get as much back from the surveys as we’d hoped to, and that was another thing I learned — how it’s so easy to get zoned in on a perfect world. You can think of things that would be awesome, but there’s all these other hoops you have to jump through, and then sometimes the plan changes, which it did for us during MIRTA.

What was valuable about taking such a different approach to your capstone?

Compared to being in a really heavy, science-based major, it was really good to get a real-world perspective on scientific products and how to get them to market. As an animal science major, you only have to take one business class, and this gave me that practical perspective unlike the textbook stuff you learn in class. It was really eye-opening and awesome and I’m glad I was able to actually make it a part of my studies.

You’re off to vet school now, is there a particular area you’re thinking about studying?

Now that we’ve done this, I think orthopedics is really cool. I’ve been working at a local vet practice [in Maine] and we do orthopedics there, so I’ve been able to shadow some over the summer and I actually got to scrub in on an orthopedic surgery. I’m so early in my veterinary career and that’s the only speciality I’ve been able to really see so far, so things could change, but I do like orthopedics.