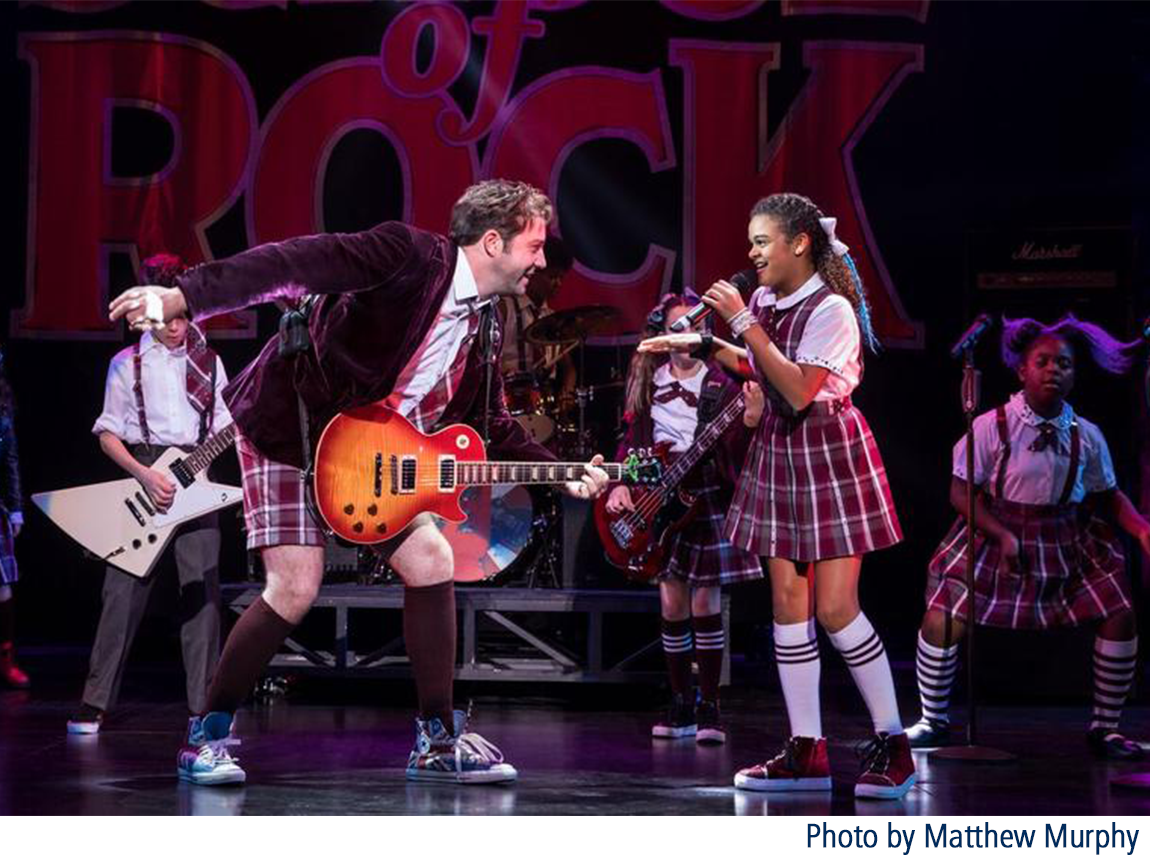 After more than four years and an estimated 1,250 performances, actor Merritt David Janes – “DJ” to family and friends – is taking the summer off from his leading role in the hit musical comedy “School of Rock.” Janes plays Dewey Finn, a frustrated rock-star wannabe who fakes his way into a teaching role at a stodgy prep school and, unbeknownst to school administrators, proceeds to instruct his fifth-graders on the subject he knows best: the heavy-metal thunder of rock music. Janes explains how he landed the part, the demands of touring, and his UMaine influences.

The “School of Rock” tour was 63 cities in 88 weeks. I was in the original cast on Broadway, which began in April of 2015…which means I have been with the show longer than I was in high school!

“Teacher’s Pet” is my favorite song from “School of Rock” to perform. It is the song that comes at the show’s end, when we play at The Battle of the Bands. Right before we start singing, it sort of feels like we’ve made it and we can take it all in and enjoy it.

Dewey has definitely been the most challenging [role to play]. Running, jumping, singing, screaming, playing guitar and trying to keep up with those talented little cherubs! [Playing the lead role in] “Sweeney Todd” was probably the most enjoyable. It is a role that literally covered every possible state of mind a human being can experience. And it was the only show that brought me to play at UMaine, across New England, and through my hometown theatre in Burlington, Vermont. It was the best week of my life!

On a typical day [of touring], I explore the city I’m in or I sleep as late as possible. Ideally, I play the guitar for a couple of hours before I go in and try to do some recording or song writing for the day. I call family on the way to the theatre and I arrive 30 minutes before the show, where I begin some vocal warmups and a stretching routine in my dressing room. After the show, I go to the lobby where I sign copies of my album “Waiting in the Wings” along with recordings of songs I did with the original Broadway kids called “The Winter Guardians.”

I typically get back to my hotel suite at about 11 p.m. and bedtime is usually around 2:30 a.m. If I’d known that particular bedtime was in my future, I never would have scheduled 8 a.m. classes while I was a student at UMaine!

Every city has its own unique personality and we all step into the world of the show together every night. I enjoy the great adventure of every show I have been a part of. It has taken me all over the world and across our beautiful country. I only have two states left to visit in the USA:  North Dakota and Alaska. (I think I’d better end with Alaska. Might be a bit anticlimactic to end with North Dakota. No offense to my friends in Fargo!)

My least favorite thing is that it can seem quite lonely at times. Not much time to even think about getting married or having kids. When I come off the road, it seems like I’ve been frozen elsewhere while time and life marches on in the places I love to be. After 11 years of touring, it’s always a big adjustment returning home.

I think the performing bug bit me back when I first joined the Maine Summer Youth Music camp program at UMaine in the 6th grade! I sang and played in what is now the Collins Center for the Arts for the first time and I was completely hooked!