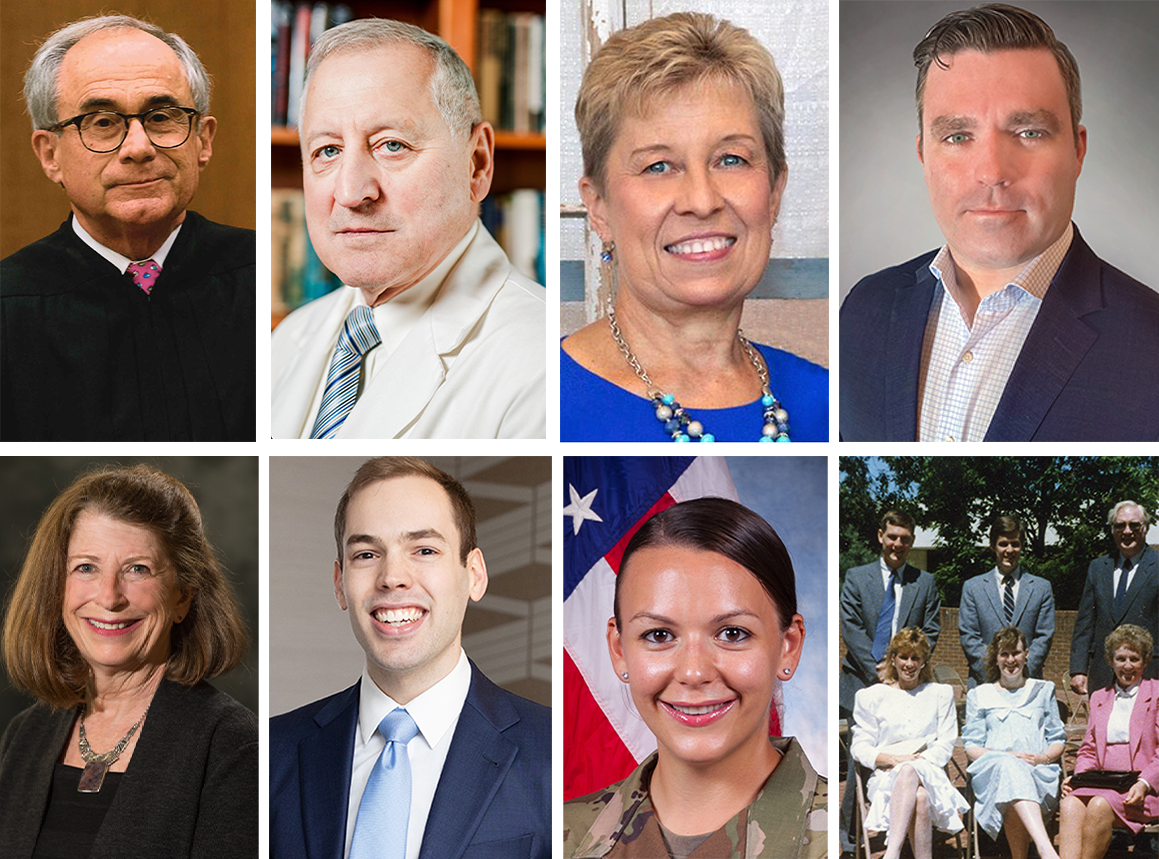 SEVEN INDIVIDUALS and one family have been selected as recipients of the Alumni Association’s 2021 Alumni Achievement Awards. The 2021 awards program was sponsored by The Jackson Laboratory.

Singal arrived in the U.S. as a young immigrant following World War II. After graduating from UMaine and earning his law degree he returned to Bangor to begin practicing law. He rose in his profession and in 2000 President Clinton nominated him to the United States District Court for the District of Maine. He served as chief judge from 2003-2009. In 2019, U.S. Supreme Court Chief Justice John Roberts appointed Singal to the Foreign Intelligence Surveillance Court along with his District Court duties. In that role, Singal reviews and acts on government requests for electronic surveillance, physical searches, and other matters related to foreign intelligence gathering.

Paul Plourde ’73, ’74G, M.D. was chosen to receive the Bernard Lown ’42 Humanitarian Award. Plourde began his medical career in a private endocrinology practice and then used his clinical and scientific skills to develop new pharmacological agents to help his patients. He became an industry leader in the planning and development of oncology drugs. His work led to the development of a drug to treat children with a form of leukemia. He also led a large study of the treatment of breast cancer, and his scholarship and commitment led to the development of novel hormonal treatment of the
disease.

The Spirit of Maine Achievement Award recognizes an alumnus who, within 15 years of graduation, has achieved out-standing professional, scholarly, public and/or entrepreneurial success. Ernest Scheyder ’06 is a journalist at Reuters whose work focuses on transportation and the energy industry. He has also covered national stories, including the 2020 Presidential campaign, Dakota Access Pipeline, Sandy Hook massacre, and Penn State abuse scandal. He began his career with the Maine Campus and the Bangor Daily News before earning a master’s at Columbia Journalism School and working for the Associated Press.

Barbara Brown Dalton ’81 was honored with the Suzanne Kay Hart ’68 Alumni Service Award (previously known as the Pine Tree Emblem Alumni Service Award). Dalton served several terms on the association’s Board of Directors, and as both president and the longtime correspondent for the Class of 1981. A former Block M recipient, she is a faithful fan of Black Bear Athletics, an Honorary M Club member, and as a member of the Athletic Advisory Board. She is also a Maine Mentor, a loyal donor, and a dedicated supporter of the university and its alumni.

Jean Deighan is the recipient of the 2021 Champion of UMaine Award. The award recognizes an individual who, though not an alumna of UMaine, has provided effective, longtime advocacy for UMaine. Deighan has been an avid proponent of the Zillman Museum of Art, and the company she founded provided free museum admission to countless visitors for several years. She has served as a member of the President’s Development Council, on the Board of Visitors, the Maine Business School Advisory Board, and volunteered in other capacities for the benefit of the university.

The Stimpson family was honored with the Fogler Legacy Award. The award recognizes a family with at least three generations of University of Maine graduates. The Stimpson family’s four generations of UMaine alumni began with Clifford Stimpson ’31 during the Depression. The second generation included Don Stimpson ’55, DVM, who practiced veterinary medicine in Presque Isle before becoming chair of UMaine’s Department of Animal and Veterinary Sciences and serving as both associate and acting dean of the College of Natural Sciences, Forestry, and Agriculture. Dr. Stimpson’s daughter, Leslie Stimpson Boyce ’84, and son, Scott Stimpson ’86, continued the family tradition, and both married Black Bears. Leslie is a teacher and Scott is chair of the Intellecttual Property Practice Group at Sills Cummis & Gross P.C. Two of Scott and Laurie Hutchinson Stimpson’s ’88 three sons are Black Bears. Tyler graduated in 2018 and Dillon, who pitched for the Black Bears, earned his degree in 2021.

Seth Albert ’14 received the 2021 Rising Star Award in recognition of his efforts on behalf of the UMaine Alumni Chapter of Southern Maine (UMACSM). The award recognizes a recent graduate who has demonstrated outstanding leadership on behalf of his class, an alumni chapter or group, or the Alumni Association. Albert joined the UMACSM shortly after graduation and became an active volunteer. The board of directors recognized his passion and energy, and he was asked to join the board. Now vice president, he has been a consistent leader and active volunteer. He has worked to increase membership and advance the mission and visibility of the group.

Kristina McTigue ’12 also received the 2021 Rising Star Award. As a student, McTigue was a member of Class Council, and continued her involvement after graduation as vice president of her class. She helped organize alumni events in Washington, D.C. and serves as co-correspondent for the Class of 2012. McTigue is a first lieutenant and licensed clinical social worker in the U.S. Air Force.

Hemant Pendse, an internationally recognized leader in forest bioproducts research, has been named the University of Maine 2021 Distinguished Maine Professor. The Distinguished Maine Professor Award, the highest faculty award, recognizes the highest qualities of teaching, research, and public service. Since joining the university in 1979, the professor of chemical engineering and chair of the Department of Chemical and Biomedical Engineering has spearheaded innovative research that has earned two patents, produced 82 publications, given more than 200 technical papers, and garnered $17 million in external funding. Pendse founded the Forest Bioproducts Research Institute (FBRI) in 2010 and serves as its director. FBRI aims to identify the various factors that would enable a commercial scale biorefinery in Maine. Under Pendse’s leadership, FBRI built the nation’s first pilot-scale plant for manufacturing nano-fibrillated cellulose, or nanocellulose.