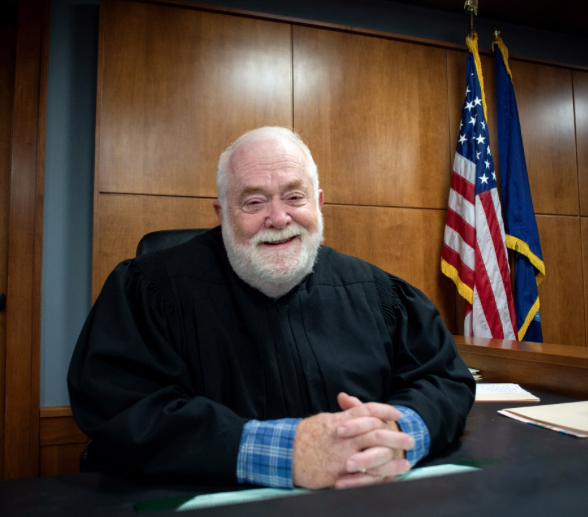 Maine’s longest-serving District Court judge is UMaine alumnus Kevin Stitham ‘82G, who retired last month after practicing law and presiding over cases in Piscataquis County for many years. This profile appeared in the Bangor Daily News on September 20, 2021.

DOVER-FOXCROFT, Maine — The state’s longest-serving District Court judge now on the bench will retire Sept. 28 — exactly 44 years after he became a lawyer.

Kevin Stitham, 69, was born and raised in Dover-Foxcroft. A graduate of Foxcroft Academy, Bowdoin College, and the University of Maine School of Law, he has spent his entire career in Piscataquis County — first as an attorney in a firm with his father-in-law, Stuart Hayes, then, on the bench since 1998. [Stitham also earned a M.Ed. from UMaine in 1982.]

He is now the only judge who handles most District Court matters that come up in Piscataquis County, including divorces, small claims and child protective cases. He also presided in Millinocket and Lincoln in the District Courts there.

“My father-in-law could have practiced anywhere but he came back here to Dover,” Stitham said earlier this month. “When I joined the firm, he told me, ‘You aren’t going to get rich in Piscataquis County but it is a pretty good life.’ And he was correct.”

Stitham’s decision to retire this year was influenced by the 40 years his dad, Dr. Linus Stitham, practiced medicine in town.

Plus, he has a grandson who will turn one next month who lives in Portland and a granddaughter due in November in Brunswick. The judge and his wife, Jane Stitham, want to spend as much time as possible with them.

“I think I’ve hit the children of the children of the children,” the judge said. “I might have been dealing as a lawyer with a child as a guardian ad litem and later the child becomes the mother, then the grandmother, I’m dealing with as a judge. In rural counties, you can deal with a person across a huge span of time where you can see wonderful success stories. It really is moving.”

Stitham may not necessarily see a success story from the bench but, years later, he will see someone in the community who came before him in a criminal or a child jeopardy case, who has turned his or her life around.

Chris Smith, now a prosecutor in the Penobscot County District Attorney’s office, appeared hundreds of times before Stitham when he was in private practice. Smith said that Stitham would not put up with baseless arguments from lawyers, was able to accurately determine witness credibility and wasn’t afraid to make unpopular decisions.

“I’ve often seen him call defendants, especially juveniles, up to the bench so he could make more of an impression by speaking with them face to face,” Smith said. “He really wants people to succeed when given a second chance. No judge worked harder to get the right result in every case, whether it be small claims or a serious felony.”

During an interview earlier this month, Stitham wore a flannel shirt under his judicial robe. Male judges usually wear a dress shirt and tie under their robes when they preside in courtrooms.

“The pandemic has laid waste to fashion,” Stitham joked.

While society is less formal now and, in some cases, more angry than it was 40 years ago, that all changes once litigants come into the courtroom, he said.

“People come into the courtroom and it’s a different world,” Stitham said. “It’s a serious place and people still have the feeling that there are expectations about how they must behave.”

While court procedures, the forms used for filings and technology have changed over the decades, people and the problems that bring them to court haven’t, in the judge’s opinion.

“Human nature has not changed but the problems are more complex now,” Stitham said. “The scope of the drug problem has grown. The money involved in trafficking and the impact of drugs on rural communities has increased markedly.”

Another problem in Piscataquis County is the significant drop in attorneys living and working there. In 1978, there were nine — including Stitham — in Dover-Foxcroft alone. Now, there are four in the entire county, and none practices criminal law, he said.

Stitham’s daughter Stacy Stitham, 41, is a fifth-generation Maine lawyer practicing in Brunswick, whose maternal grandfather, great-grandfather, and great-great grandfather all served as president of the Maine State Bar Association. One of the things she has learned from her father is that “the true practice of a profession is more than just serving one’s clients, it is serving one’s community,” she said.

“Growing up, Dad always made it home for dinner, always came to our events, and always was there when we needed him,” she said. “But he’d head back into the office when we were washing up for bed to make sure the next day’s clients had what they needed. Or, he’d head off to an evening board meeting for one of the many associations with which he was involved. That’s the example he set, of working hard and giving back, and that’s what I’ve tried to emulate throughout my career.”

For the last 23 years, Stitham said, he’s been recognized in the county as “the judge” and as a member of the boards of School Administrative District 68 and, later, Foxcroft Academy for about 40 years

“There’s a recognition here that when people see me they think, that’s Kevin ‘the judge’ but it’s still Kevin,” he said. “The long-timers, they see people as multidimensional. It’s a wonderful melding of complexity.”

In retirement, he’s looking forward to being recognized as a grandfather.