The Art of Giving Back

It’s Thanksgiving week and families are sharing their favorite dishes with relatives and friends. One may hear “Don’t forget the cranberry sauce!” The story behind that holiday food staple started with a few factors including a UMaine Alumnus and an honor society.

Marcus Urann, a Sullivan, ME native and graduate of the University of Maine, led the charge along with several other students and university administrators to establish the Phi Kappa Phi Honor Society in Coburn Hall during his senior year in 1897. Three years later, Phi Kappa Phi became a national honor society. 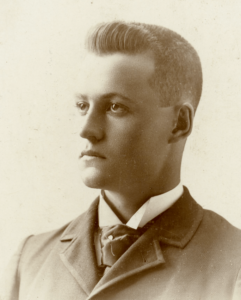 The organization involved both men and women who earned recognition for their academic excellence and involvement in their communities. Urann took the mission of Phi Kappa Phi and used it in all of his work which eventually led him to changing the cranberry farming industry.

According to an article “The Ideal Behind Phi Kappa Phi,” Urann said, “I wanted the ability of high ranked man to be made most useful to society; also I was looking for something that would be an inspiration to all students to work for high rank and I believe that uniting those men who were interested would be helpful.”

Unlike other groups or fraternities at the time, Phi Kappa Phi was created for both men and women to join, presenting viewpoints from different backgrounds and professions. Urann understood in order to do so, many ideas or individuals may not fit into what society expects; however that is just what Urann wanted in Phi Kappa Phi.

“With rare exceptions, I did not, nor do I now, believe in the natural fitness of anybody for anything but I do believe that anyone can do anything that he or she really desires to accomplish,” said Urann.

Urann graduated from UMaine and practiced law in the Boston area for years before becoming a cranberry grower. He became aware of food insecurity and later worked with a few others to help address the problem, creating cranberry sauce in a can.

He and his colleagues later founded the well-known company Ocean Spray.

Canning cranberries assisted with food insecurity by making them available year round instead of only during harvest season. When asked why he decided to take that route, he made it clear that he simply wanted to help others.

“I felt I could do something for New England, you know everything in life is what you can do for others,” said Urann.

Brianna Hughes ’14 had a similar route as Urann. She attended UMaine for her Master’s and PhD in food science, worked as the student VP for Phi Kappa Phi, and later worked in product development for Ocean Spray. She currently works at the Town Dock, a seafood company, as the vice president of operations, supply chain and quality.

“Leading from a place where you seek to understand other viewpoints and backgrounds. I think that still shines today throughout Phi Kappa Phi. It challenges you to think differently and meet people where they are,” said Hughes.

Another common factor that Hughes shares with Urann is the desire to help others.

“You can see that common thread of service through Marcus Urann’s life and I think that’s what Phi Kappa Phi stands for today. The students that join and spread that leadership mentality through their career and community is when you get the ripple effect. Whether it’s involving cranberries or any other achievements Urann has had, it’s that idea of what you’re doing in life matters to people,” Hughes added.

The executive director and chief executive officer of Phi Kappa Phi, Bradley Newcomer, was inducted into the society in 2012 as a faculty member at the University of Alabama. As someone who has always acknowledged academic excellence, he expressed how Urann’s legacy influenced him throughout his career.

“It reinforced my outlook and is a constant reminder of the love of learning and when we are supporting chapter officers, faculty and staff all over the country and world, it reminds me of how important curiosity is. To not be afraid of the unknown,” said Newcomer.

Urann’s curiosity led to creating a prestigious collegiate honor society with over 300 chapters nationwide, and a holiday food staple that assisted with food insecurity. His curiosity contributed to giving back to UMaine, New England, to students, faculty, and even families all over the world during the holidays.

So the next time cranberry sauce appears during a holiday meal, enjoy the delicious flavors knowing that a UMaine Black Bear promoted curiosity and belief in the good mankind can do.