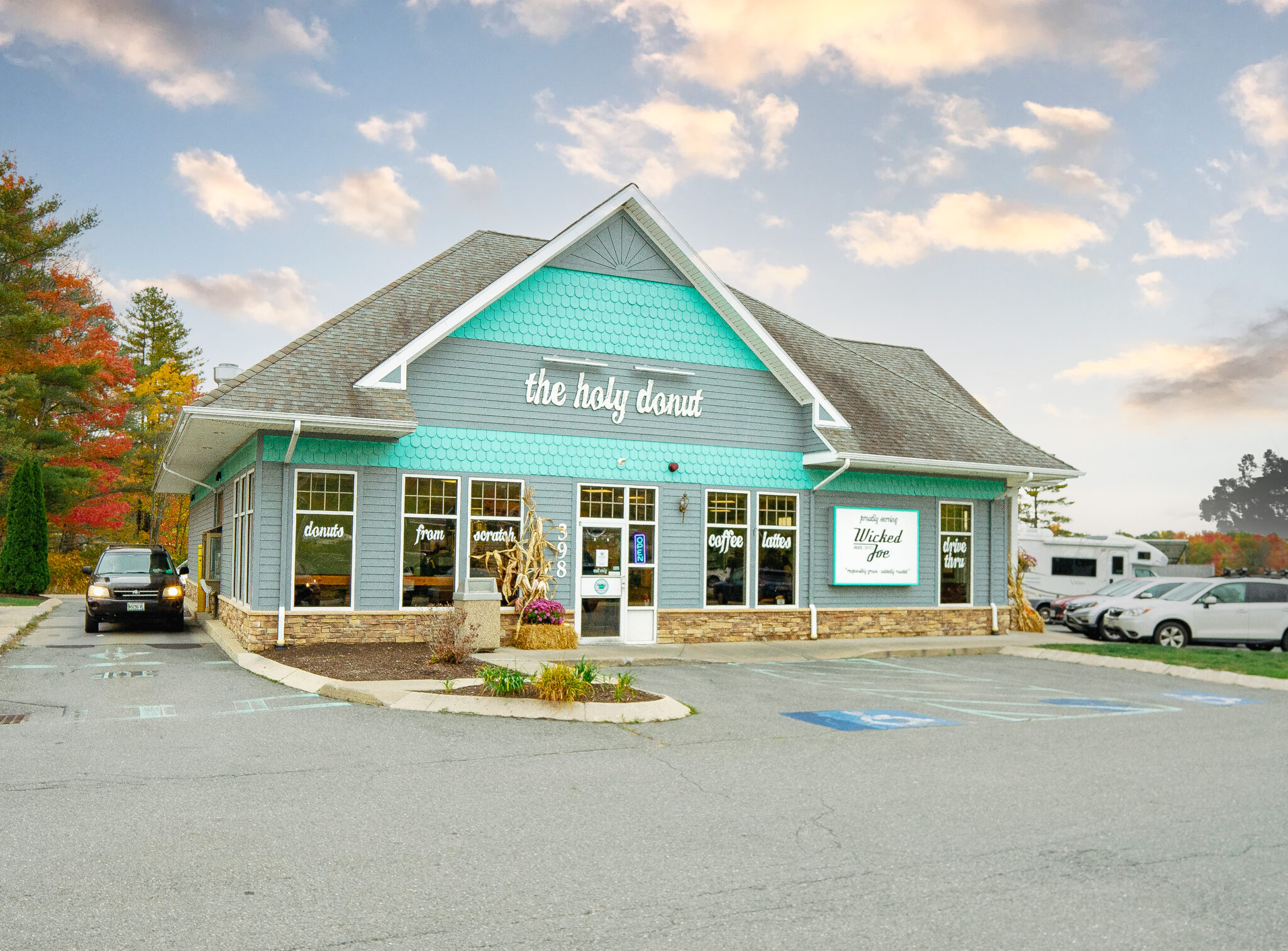 The “Holy” Crop of Maine

During her days in Orono you could catch Leigh Kellis ’97 studying for Spanish exams—today, she has built a donut empire. What began as a few dozen donuts baked from her Munjoy Hill apartment each morning has become The Holy Donut, a Portland, ME based donut eatery, that boasts three locations with a fourth set to open in Arundel, ME next year which will feature a commissary kitchen to help increase supply for the growing business.

The premise of the business is straightforward: fresh donuts with simple ingredients, made daily. But her secret ingredient? A Maine pantry staple: potatoes.

Kellis credits riced potatoes in particular as the component which sets her donut apart from any other in the market in taste, texture, and flavor. “I worked at a pizza place here in town as a bartender and [my boss] said out of the blue: ‘Use potato.’ It just hit home,” she noted. “It gives it richness and moisture without fat or whatever. I was just going for a product that was different and delicious.”

“He also said, ‘Call it the Holy Donut,’ she laughed. “And it was not religious, it was just kind of the concept of the donut and good food being holy, not to mention the potato as the holy crop of Maine and a very significant part of our economy.” 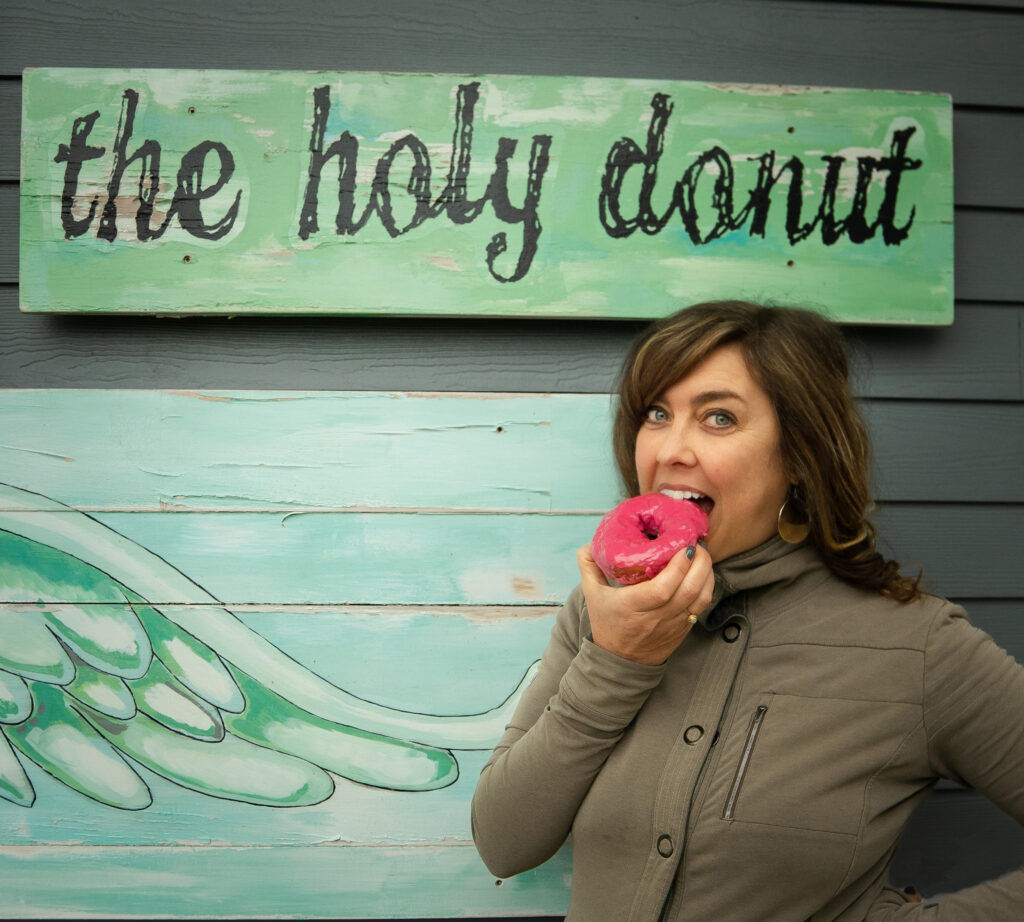 She started the very next day, spending the first two years of building her business hand-peeling, boiling, and ricing every potato for the few dozen donuts she made each day. By delivering fresh and hot donuts to the Portland-based coffee shop Coffee By Design every morning between 6 a.m. and 7 a.m. Kellis ensured other businesses would notice her donuts; and they did. She quickly outgrew her home kitchen and expanded into a commercial kitchen space. With new challenges Kellis’ father, Allan Kellis, stepped in to help with anything from delivering donuts to frying them.

With the new kitchen, a following, and new wholesale accounts, it quickly made sense to open a brick-and-mortar shop and they landed on 194 Park Avenue in Portland. Few banks were willing to take a chance on the entrepreneur, so Leigh’s mother, Cynthia Scholar, put up her retirement savings to open the eatery. Alongside her as well was Leigh’s sister and fellow Black Bear Elizabeth Buckwalter ’96 who was instrumental to the March 2012 opening.

From its start, Kellis wanted to create a very specific work environment that reflected her vision and values. In addition to using locally sourced potatoes, she also sought whole and organic materials by using Stevia in place of Splenda or sugar and ensuring that  all fruit and coffee used in store was fresh and organic. Paper, goods, and plastic were ensured to all be compostable at a time when the city wasn’t requiring businesses to do so, and all cleaners and solvents used were natural and organic.

Giving back to the community was also an important tenet on which the business was built. Kellis started a policy with her employees which she termed “volunteer time-off.”  The concept originally was to actually help another human being and to do something kind for another human being. For every hour an employee spends volunteering, The Holy Donut will pay toward an employee’s day off. It has since morphed into a broader concept of volunteering in the community to make the world a better place. They also started a “Flour Power” program in which a portion of every Tuesday’s profits for the business were donated to bring individual bouquets of flowers to elderly people living in assisted facilities, delivering bouquets to their rooms. The COVID-19 pandemic forced the “Flour Power” program to slow down but The Holy Donut continues to encourage community building in other ways. Three partners are selected each year for the business to donate to and leftover donuts at the end of each day are available to local groups and organizations for donation to their meetings, events and functions.

“I am a hope cheerleader,” Kellis reflected. “I’m almost painfully sensitive to other people’s pain as an empath, which is exactly why I started the Holy Donut—to literally bring joy, bite by bite to people.”

When the donut popularity continued to grow and they opened a second location, Kellis’ brother-in-law, a UMaine alumni as well, stepped in to help the business mindfully grow. Jeff Buckwalter ’98 saw potential in the endeavor and he took a slow, calculated approach to build slowly and to be patient.  “So we gather ourselves,” she stated, “we build a team—we, as he says, get the right seats and fill the right seats on the bus.”

With many seats to fill on that bus and new heights reached each year it doesn’t seem like the donut business is slowing down for Kellis. “We live in a very diet centric culture. Be vegan, be paleo, be this, be that. Everyone’s like, what do I do?,” she closes.  “I say, eat what you love.”