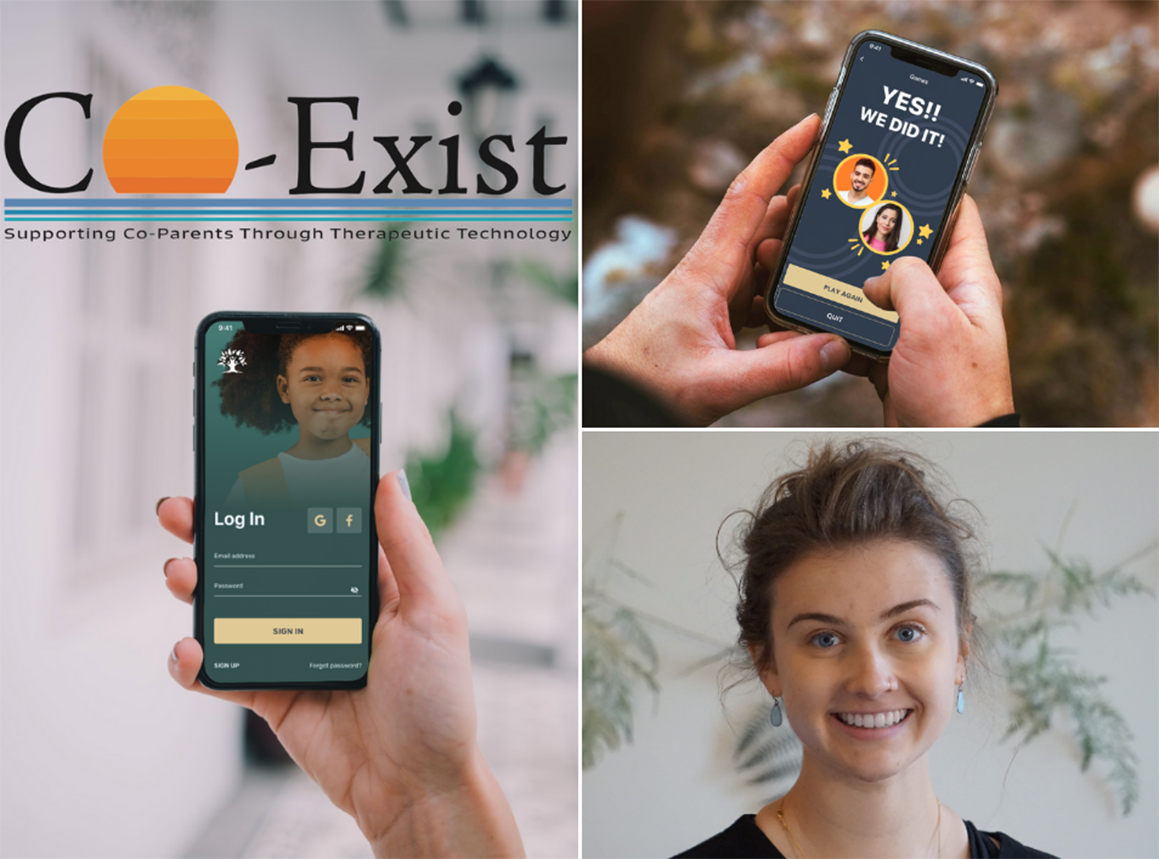 This Faculty-Student Startup is All About Helping Parents Communicate

Black Bear alumni, faculty, staff, and students are among Maine’s most productive innovators and entrepreneurs. This month, Innovators of UMaine showcases Co-Exist, an app-based therapy program that is designed to help separated and divorced parents successfully communicate about their kids. The concept behind the app evolved from research done by Daniel Puhlman, assistant professor of family studies at UMaine and head of the Parenting Relationships Research Lab. In 2020, Puhlman and Emma Richardson ’20, then a senior at UMaine studying child development and family relations, joined the university’s MIRTA accelerator program to pursue development of the idea, and Co-Exist was born. Richardson, who transferred to UMaine for her junior year and is now working toward her master’s in human development, serves as the entrepreneurial lead on the project.

This month, Bear Tracks had a chance to catch up with Richardson, who recently represented Co-Exist as a finalist in the Top Gun accelerator program Statewide Showcase on May 26, and who is preparing for the final pitch-off in the Greenlight Maine College Edition scheduled for July 24.

How will this innovation impact people?

Parents who are going through a divorce or a separation often are trying to navigate changing and contentious relationships, but they still need to interact on a daily basis because they have their kids, who are watching all of this. Co-Exist can help parents reframe their daily interactions and their overall relationship. Existing technology in this area tends to be more resource-based, while Co-Exist incorporates simple and collaborative games and tasks that will help parents work together as a team. We’re also working on an artificial intelligence-based feedback system that will give them immediate feedback on their interactions and how they can improve. Moving forward, we’re hoping to work with parent education agencies, which offer family-focused programming, to really get the app to parents who need help.

When people think about innovation and business development, they talk about pain points — you’re trying to figure out what a potential consumer has a problem with and what solution would benefit them. With Co-Exist, we’re not just talking about something that doesn’t work right or is an inconvenience. We’re talking about relationships and real lives and the futures of the kids who are involved. Really, it impacts people in that it is people.

Who do you look up to as a role model for your innovation work and why?

I started teaching pre-school in 2017, and it really comes down to the kids that I work with. A lot of them come from really happy and healthy families, but there are others who have a lot going on at home and have had really hard starts for only being three or four. What I’ve learned working with kids is that they’re the most sensitive things on the entire planet. They pick up on everything, and so if something’s off, they’re going to feel it and it impacts every way that they function and how they interact with the world and with people. You just really want to help them and make their lives easier in any way possible, to help set them up for success.

Who do you collaborate with on your innovation and why?

By far, the biggest collaborator that I have is Dr. Daniel Puhlman. He saw, through his professional experience, the need for an accessible and engaging solution to this issue, and he brings the ultimate vision to the table. We started at UMaine around the same time — he came here and started teaching in 2018, the same year that I transferred. I was in one of his classes, and he was starting up the Parenting Relationships Research Lab and he invited me to come check it out. That was my first introduction to the research side, and it gave me the chance to get to know him better, and get to know the department. He has a wide breadth of professional knowledge and experience as a researcher, which is excellent, and our skills really balance each other well.

What do you find the most satisfying about the innovation process?

There’s a lot of trial and error involved when you’re innovating or starting a project. You’re always learning and you’re questioning, and you’re pivoting. Then, you’re seeing everything that other people are doing, comparing yourself to their successes, and thinking ‘Am I doing it right?’ But then you have those moments where someone gets it — you talk to someone who understands the problem you’re trying to solve and thinks your solution could really help a lot of people. That just gives you a boost of confidence, and you say to yourself, ‘Yes, this is possible, and we are working really hard and it is going to go somewhere.’ Having it affirmed that you’re not just pulling something out of thin air is satisfying.

What does innovation mean to you?

I can boil it down to one word: try. I think if you say to someone ‘Just do it,’ that implies that you’re going to succeed. Trying is more open-ended, and you open yourself up to asking for help if you need it, but that doesn’t mean you don’t need to put in the effort! I keep thinking back to the kids that I work with. They’ll say ‘I can’t do it,’ and I’ll say ‘Just try.’ They’ll come back with ‘But I can’t though,’ and I say ‘Just try’ again. You never know, and at the end of the day, you don’t have anything to lose.