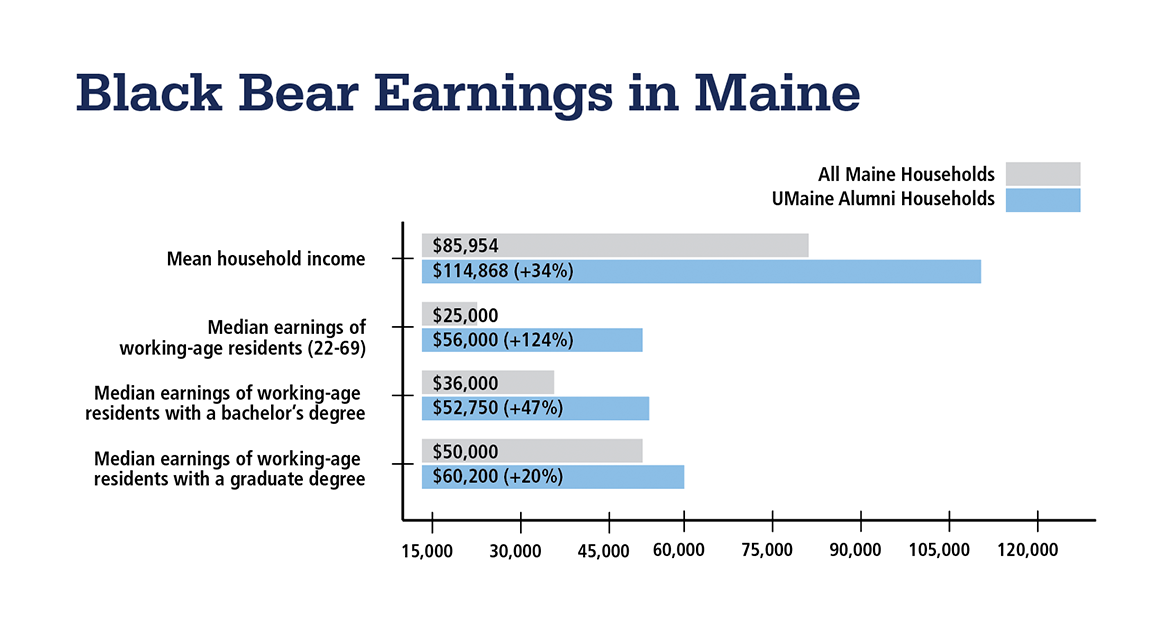 Alumni of Maine’s flagship university in Orono tend to earn more than others in Maine with comparable levels of education. They also pay more in state and local taxes than the average Maine household.

Those are among the findings of a first-ever study of the economic and community impact of Black Bear alumni in Maine and the U.S. The independent University of Maine Alumni Association commissioned the research, which was conducted by the Margaret Chase Smith Policy Center.  Maine Savings Federal Credit Union underwrote the study. The MEMIC Group, a Maine-based workers’ compensation insurance company, also provided financial support.

Undertaken in 2020, the study was based on detailed responses from 5,288 Black Bear alumni from across the U.S. Researchers scaled the responses to produce a reliable socio-demographic representation of the 100,000-plus Black Bear alumni base. More than half of those alumni live in Maine.

Earnings of Black Bears in Maine

The Alumni Association is releasing the findings thematically in six parts. Part One of the findings—“The Economic and Tax Impact of Black Bear Alumni in Maine”—revealed the following:

“These numbers are impressive,” said Robert M. Frank, chair of the Alumni Association’s board of directors. “They reflect the difference a UMaine education makes in the earning power of Black Bear alumni—and how they are valued by Maine employers. It’s important that we communicate these findings to the tuition payers, taxpayers, and policy makers of our state.”

The Tax Impact of Black Bears

Other findings in Part One identify the annual direct impact of Black Bear alumni households on Maine’s state and local tax bases. On average, they pay:

The comparisons are based on tax data from 2018.

“Overall, Black Bear alumni households are annually paying a combined total of $453 million in state and local taxes,” said John N. Diamond, the Alumni Association’s president and CEO. “To put things in perspective, the $453 million Black Bears pay each year in state and local taxes is 350 percent greater than the $97 million that UMaine—the flagship university in Orono—receives annually in state appropriations.”

Diamond added that $453 million total does not take into account income, sales, or property taxes paid in Maine by businesses owned or operated by Black Bear alumni except in the case of certain types of corporations. Nor does it include the economic impact of UMaine itself, which spends roughly $400 million annually, mostly on salaries and wages and purchases of goods and services in Maine.

“Investing in a UMaine education pays off for individuals, their families, Maine taxpayers, and Maine employers,” added John C. Reed, a UMaine alumnus who is president and CEO of Maine Savings Federal Credit Union, the study’s underwriter. “This information is valuable to everyone involved in understanding and advancing Maine’s economy and quality of life.”

“My take-away from this study is that public investment in public higher education is worth every nickel,” said Michael P. Bourque, president and CEO of The MEMIC Group and also a UMaine alumnus. “This institution makes a profound difference in both lives and livelihoods and deserves our enthusiastic support.”

“I am pleased that the University of Maine Alumni Association initiated this study to better understand the impact of our alumni on the Maine economy,” says University of Maine President Joan Ferrini-Mundy. “I know that Black Bear alumni are making a difference, and I’m eager for the results of this report to be interpreted and used. Thank you to the Alumni Association and the Margaret Chase Smith Center for their leadership in this effort.”

In March, the Alumni Association will release Part Two of the study’s findings. Those will address the influence of Black Bears with Maine’s business, industry, and labor communities. Other parts of the study to be released will cover the civic and community involvement of Black Bear alumni; their participation and support for the arts and humanities; their charitable and philanthropic practices; and their attitudes about living, working, and returning to Maine.

More information about the study, including additional findings and the methodology, may be found at UMaineAlumni.com/impact/.

Established in 1875, the University of Maine Alumni Association is an independent, not-for-profit organization based in Orono. Its mission is to inform and engage with past, current, and future UMaine students and to advocate in ways that further enhance UMaine’s value, quality, reputation, and resources.

The Margaret Chase Smith Policy Center is a nonpartisan, independent research and public service unit of the University of Maine. Established in 1989, it conducts research and applied public policy activities designed to inform public policy processes and societal decision-making.

< Back to Alumni Impact Study