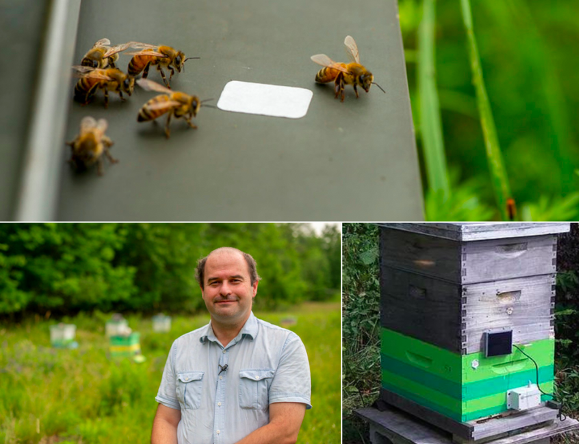 Black Bear alumni, faculty, staff, and students are among Maine’s most productive innovators and entrepreneurs. This month, Innovators of UMaine showcases Maine Biosensors, a startup spun out of UMaine research that is using radar-based technology to help beekeepers monitor overall hive health.

Most people would associate bees with honey, but few probably realize how critical the flying insects are to food production as a whole. According to the United States Department of Agriculture (USDA), bees pollinate approximately 75 percent of the fruits, nuts and vegetables grown in the United States, and one out of every four bites of food people take is courtesy of bee pollination. In Maine, their role is especially significant, as bees exclusively pollinate the state’s wild blueberry bushes, a $23 million industry for the state.

A pair of UMaine researchers have now teamed with an alumnus to commercialize patent-pending technology that tracks the activity of bees around a hive. The system, called HiveSentry, can offer early warning about signs of colony decline  — including Colony Collapse Disorder, when the majority of worker bees disappear from a hive — that can have dire consequences for agriculture.

Maine Biosensors was co-founded in 2019 by associate professor of electrical and computer engineering Nuri Emanetoglu and adjunct professor of electrical and computer engineering Herbert Aumann. The company holds an exclusive license for the HiveSentry technology, which was invented by the founders at UMaine. Initially funded through the Research Reinvestment Fund and the National Science Foundation’s Research Experiences for Undergraduates site program, Emanetoglu and Aumann’s project was one of five selected in 2018 for the first cohort of MIRTA, an accelerator program that seeks to move UMaine research along the path from discovery toward commercialization.

This month, Bear Tracks had a chance to catch up with Emanetoglu about the path forward for Maine Biosensors.

Tell us about the research that led to this innovation.

My collaborator, Herbert Aumann, has a small apiary at his farm in Dover Foxcroft. He thought maybe we could use radar to try to get some information about beehive health by listening to what the bees are doing, what frequency they’re buzzing. That was how the project originated. We’ve had a few twists and turns, and the research has progressed to its present form where we’re essentially looking at beehive activity — how many bees are flying in and out of the hive, and trying to correlate that with the hive’s past behavior, as well as with the current behavior of other hives in the same area, weather conditions, etc. The technology is responsive because it’s looking at the bees’ activity in real time. While some of the COVID-19 restrictions set us back in terms of product development, last year we did some testing of an improvement to our sensor, where we combined Doppler radar for the bee flight activity along with a vibration sensor that detects vibrations and gives us some information on the internal activity in the hive that improves our ability to detect swarming and warn beekeepers so that they don’t lose their colony. We have named this combined sensor Janus, as one sensor looks at bees flying out of the hive and the other senses what is happening in the hive.

What steps have you taken to commercialize your innovation since completing the MIRTA program?

We brought Josh Hayward ‘95, ‘98G on as CEO in February of this year and he’s been working with us to flesh out some business connections so that we can work with the beekeeping industry and the blueberry farmers to do some local prototype testing this summer and also get their support to apply for Small Business Innovation Research (SBIR) grants from the National Science Foundation and the U.S. Department of Agriculture. Josh has the experience and the connections to get things going on the business side, and that’s been very helpful. We were fortunate to receive seed funding from the Maine Technology Institute in 2018, and we’re seeking additional capital and partners to continue developing the technology. When we reach the manufacturing stage, we hope to manufacture the product here in Maine.

What are your goals with this innovation? Where do you see it five years from now?

We’re in the alpha-level level product right now, and we’d like to bring it to a commercial product that you can buy and use by the summer of 2023. This summer, we’re working with Lincoln Sennett of Swan’s Honey in Albion. He’s a commercial beekeeper and we’ve instrumented some of his hives to get some data as well as some customer feedback. Within the next five years, we’d like to have a good customer base so that the company is self-sufficient and can continue to innovate.

How do you see this innovation impacting agriculture in the state of Maine?

Bees are a major pollinator, and some agricultural products, especially wild blueberries in Maine, are solely pollinated by bees. Maintaining the health of bees really has a two-fold benefit: First, for the insects themselves and the products they directly produce, such as honey, but also for the produce that they pollinate. Maintaining the health of our beehives is critically important for the viability of both industries in Maine.