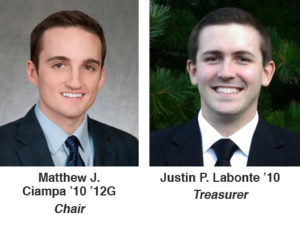 Matthew J. Ciampa and Justin P. Labonte have been elected chair and treasurer, respectively, of the University of Maine Alumni Association’s board of directors.

Ciampa, who earned undergraduate and graduate degrees in financial economics from UMaine in 2010 and 2012, is a business analyst at Pingup, a Boston-based startup. He previously worked as a senior economist at CBRE Econometric Advisors, a Boston area commercial real estate business.

Ciampa succeeds Nathan P. Briggs, who served as board chair for two years. A native of York, Maine, Ciampa now resides in Boston.

Justin Labonte of Lewiston was elected to succeed Ciampa as the association’s treasurer. After graduating from UMaine in 2010 with a degree in accounting and business management, Labonte worked as a senior associate at Ernst & Young’s Financial Services Office in Boston. He recently earned his MBA at Harvard Business School and in the fall will be joining Emerson Electric Co., a Fortune 500 company based in suburban St. Louis.

In addition to Ciampa’s and Labonte’s elections, eight other UMaine alumni have been elected to the association’s 20-member board. They are: