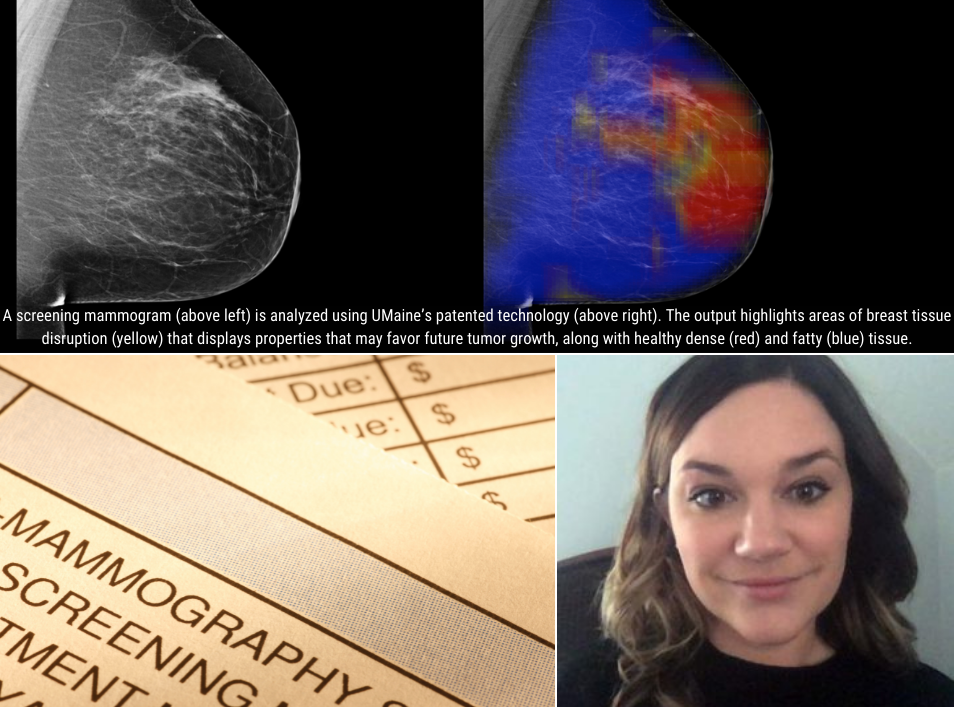 Black Bear alumni, faculty, staff, and students are among Maine’s most productive innovators and entrepreneurs. In this month’s column, Kendra Batchelder ‘11, ‘13G, a University of Maine Ph.D. candidate in computational biomedicine, discusses her work in the Computational Modeling, Analysis of Imagery and Numerical Experiments (CompuMAINE) lab with lab director and professor of biomedical engineering Andre Khalil.

Batchelder began working in the CompuMAINE lab at the beginning of her graduate studies at UMaine, and she and Khalil are co-inventors of a patented computational approach designed to aid in the early detection of breast cancer. Based on mammograms and known outcomes from patients, other researchers have trained computers to detect patterns in breast tissue that are precursors to malignant tumors. Khalil’s and Batchelder’s technology, by contrast, is based on an underlying biophysical hypothesis. Rather than teaching a computer to analyze mammograms based on knowledge of other mammograms, their algorithm can point to the physical markers believed to be linked to malignant tumor onset and growth. The goal is to identify dormant potentially cancerous tissue before it progresses to an aggressive metastatic cancer, allowing clinicians to take a proactive treatment approach. The two are in the process of forming a startup company to commercialize this technology in Maine, and Batchelder discusses how an early interest in mammography helped lead her down the path to breast cancer research.

“Before I even applied to UMaine, I was interested in being a mammography tech, but I also wanted to be a teacher. I went back and forth and couldn’t decide, and I came to UMaine and double majored in secondary education and mathematics. When I found out that Dr. Khalil was doing breast cancer research on mammograms, I thought, ‘That’s really cool – I could combine my math skills with what I was interested in doing to begin with.’ I had been planning to teach, but instead I decided to stay at UMaine and get my master’s in applied mathematics. I started working in the CompuMAINE lab the summer between undergraduate and grad school, and I never really left.

“My master’s thesis was on characterizing breast cancer tumors, and I remember that about six hours before my thesis defense, we were applying for two patents related to the research. Because my defense would be considered a public disclosure, we had to get the paperwork in before that. It was a little stressful, but in the back of my head I was thinking that everything was coming together.

“I started my Ph.D. in computational biomedicine right after my master’s, and I had to go back and take undergraduate biology, anatomy, and some other courses that I hadn’t taken previously when I was studying math. I also shadowed Dr. Amy Harrow, a radiologist at Northern Light Eastern Maine Medical Center, who is a member of my Ph.D. committee. I would sit next to her as she interpreted mammograms and she would explain her thought process – what she’s looking for, why she’s looking for it. Knowing what a radiologist is looking for when interpreting a mammogram has been helpful in developing the computational technique because it’s allowed us to be more specific to the domain rather than relying on existing image analysis tools that are not adapted for mammography.

“In every class I’ve taken, I think, ‘How is this related to what I’m doing?’ Even if it’s a completely different field, I try to think about it in the context of our research. It helps me find things that I wouldn’t have seen otherwise. In my statistics classes, I’ve been able to use and analyze our datasets, and I’ve taken a lot of applied classes, too, like spatial analysis and complex adaptive systems. There was a moment in one of my classes when we were talking about how systems emerge. If you think about the endpoints in a big, complex system, you can look backwards in time and see how outside things influence that system — like how a child’s early environment can shape their future. It was the moment when everything about our approach to looking at the overall breast tissue environment truly made sense to me.

“What I like about innovation is looking at things in a different way. Finding something new is really exciting. Because Maine is a small state, I think that’s made it easier to pull together an interdisciplinary team — when we ask for help, people are very receptive. Dr. Harrow was one of our first collaborators, and Andre has developed collaborations with pathologists and additional radiologists that we use to validate our thought process. If we see a pattern in a mammogram, we can call a doctor and they’ll tell us whether something makes sense or doesn’t make sense. Rather than us sitting here counting pixels, there’s a meaning behind it.”