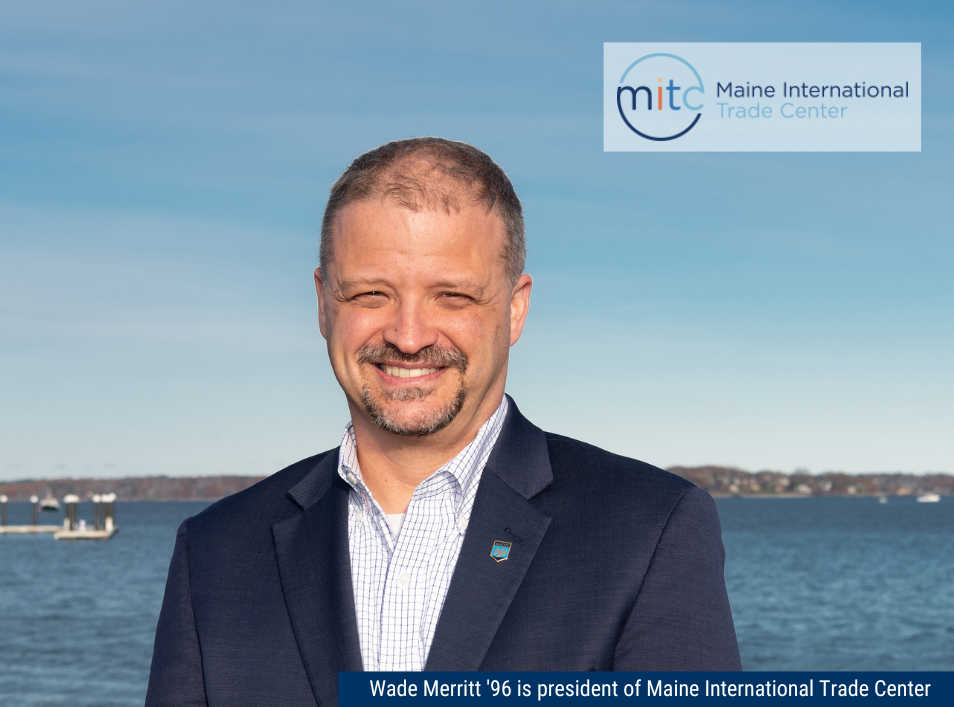 Black Bear alumni, faculty, staff, and students are among Maine’s most productive innovators and entrepreneurs. In this month’s column, we hear from Wade Merritt ‘96, president of Maine International Trade Center. Merritt, a student of international affairs, history, and Canadian studies at UMaine, became fascinated by international dealings at an early age and has spent his career to date at MITC, an organization devoted to helping Maine companies get the guidance, education, and funding to succeed in global markets and fuel Maine’s economic growth. MITC, established by statute in 1995, is the official international trade and investment office for the Maine Department of Economic and Community Development and exists as a public-private partnership supported by the contributions of member companies and the state. The organization is at the center of efforts to build Maine’s international reputation and increase international investment and partners with many across the state to accomplish its mission, including UMaine.

Wade Merritt: “I grew up in Bangor, and my dad ran the catering operation at the Bangor airport. At the time, there were a lot of international flights coming in and out, and he’d bring home European newspapers and snacks that had come off one of those flights. As a teenager, I worked there myself, doing a lot of odd jobs. All of these things combined to spark an international interest that turned into an academic pursuit that turned into my work at MITC.

“MITC was established to enhance the competitive advantage of businesses desiring to participate in the international market – that’s the language from our statute. Enhancing competitiveness is a very big mandate! When I started here in 1996, we really were just talking about exporting and why businesses should consider it. By the time I took over as president in 2017, the export development piece remained important – probably 75 percent of what we do – but we’ve started getting involved in new areas. We’re working to increase trade and investment between Maine and markets of the North Atlantic through our Maine North Atlantic Development Office initiative, as well as to develop Maine’s policy in Arctic affairs – there are international relations attached to that. All of our work, though, focuses on how Maine’s businesses, communities, and people can benefit from more and greater international engagement.

“International engagement is important because it brings in innovative ideas and new opportunities. The North Atlantic work started due to a commercial decision by Eimskip, a leading Icelandic transportation company, to locate in Portland. From there, collaborations have evolved to include: a working group with Finland on forest products management and the future of the forest economy, which UMaine is part of; an art exhibition, which includes the Portland Museum of Art and art museums in Iceland and Sweden; and academic partnerships that bring Maine universities and Arctic universities together to engage on issues of interest.

“We see MITC’s ability to act as a bridge as an important part of our role. Other countries may be further ahead on the development curve in certain areas of interest to us; bringing in those good ideas from elsewhere can help inform policy and development decisions being made here. Recent collaboration with Finland on forest products is a great example of that. There’s a lot of really forward thinking in Maine around new uses for residuals, but we’re not the only place that’s thought of those things. There’s also groundbreaking work going on globally that can help Maine move forward in this area and many others such as blue bioeconomy and renewable energy. We see exciting potential here for some long-term, positive impacts on Maine’s heritage industries.

“Innovation is essential to MITC’s work, and we recognize the need for it both inside and outside the organization. If a company, or a community, or a state wants to compete globally, they need to be thinking about innovation constantly. An organization like ours needs to encourage that and model it in order to guide companies effectively in international business. Fortunately, if you have aspirations to compete in the global market, you most likely already have that innovative mindset. MITC supports those businesses by ensuring that they’re connected with our innovation and economic development partners, whether that’s UMaine, Maine Technology Institute, or partners and governments around the globe. Sometimes that leads to an export sale, and sometimes it’s working with international partners to put our minds in touch with their minds, drive change, and lead to different and interesting opportunities for all.”