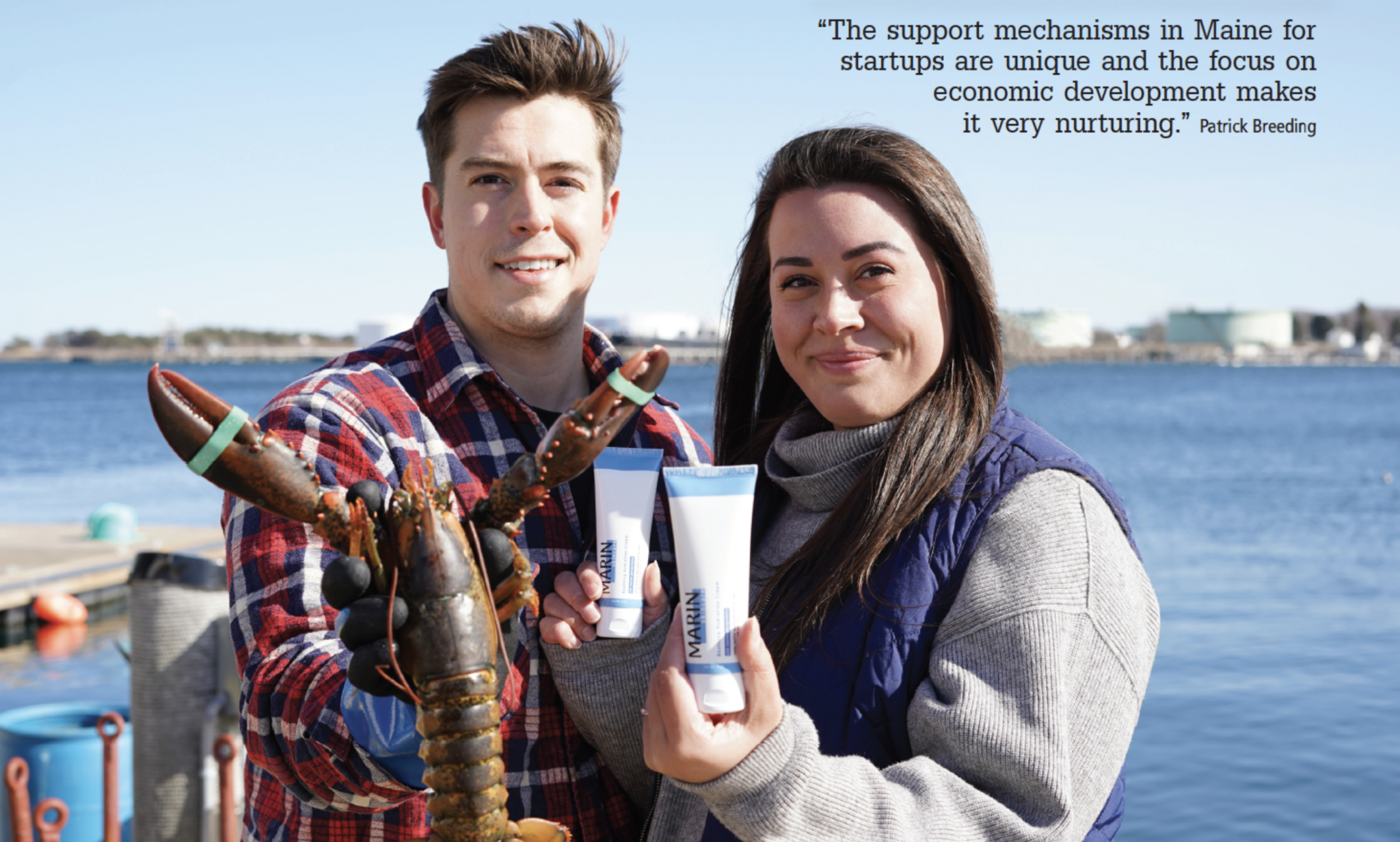 Wait—The Secret Ingredient is What?!

INNOVATORS OF UMAINE
SUPPORTED BY THE MAINE TECHNOLOGY INSTITUTE

MARIN SKINCARE CO-FOUNDERS Amber Boutiette and Patrick Breeding (both ’17, ’19G) met at the very start of their undergraduate careers at the University of Maine. Both biomedical engineering majors had schedule details to work out before classes started, and they struck up a conversation on a bench outside the engineering department offices.

Once schedules were sorted, they parted ways, with Boutiette reminding Breeding that their first class had been switched from one room to another.

“I said to him, ‘Make sure you go to that other room, don’t forget,’” remembers Boutiette. “The next day comes, I was excited to save a seat for my new friend, and he never shows up. It turns out, despite me telling him to go to the new room, he went to the room listed on the schedule and was sitting there with a bunch of chemical engineers.”

Luckily, that missed connection in 2013 was short-lived, and Breeding says it illustrates why his partnership with Boutiette (in business and in life) works to this day: Her attention to detail balances his sometimes headlong enthusiasm.

“It’s kind of funny because we were playing exactly to our natures, and that has only been magnified more now that we’re building a business together,” says Breeding.

That business is Marin Skincare, and the brand’s first product, a Soothing Hydration Cream that lists lobster glycoprotein as its key ingredient, evolved out of a successful effort during their student days to treat Boutiette’s stubborn and painful eczema.

“I had eczema for most of my adult life and it progressively got worse over the years,” says Boutiette. “Having it on your face is debilitating because you can’t really use products that have steroids in them, and I had it really bad around my eyelids and on my cheeks. I tried every type of eczema cream, oils, diet changes, lifestyle changes, everything. Nothing helped.”

In 2017, just after the pair had started grad school, Breeding met Dr. Robert Bayer, former director of the UMaine Lobster Institute. Bayer had discovered that lobster glycoprotein had a wide range of beneficial properties, and he suggested that it might help Boutiette.

Bayer, Boutiette, and Breeding subsequently collaborated on a prototype of the product that would later become Marin’s Soothing Hydration Cream. “Within a day or two, I noticed a difference,” says Boutiette. “I first noticed my skin was not burning and itching as much. After about a week to two weeks, the spots had cleared, which was incredible after years of trying so many differ-ent products.”

While they had solved Boutiette’s pressing problem, this was not a eureka moment for the pair, who were preoccu-pied with schoolwork, and with another startup they had recently launched, Zephyrus Simulation. “Amber’s eczema was gone, and we kind of forgot about it,” says Breeding.

INSTEAD, BOUTIETTE AND Breeding were immersed in something of a crash course on entrepreneurship as part of a team trying to commercialize a cost-efficient, realistic simulator to train medical professionals in diagnosing and respond-ing to critical respiratory situations. The technology was the basis of their senior capstone project, which had won the undergraduate Innovation Award at UMaine’s 2017 Student Symposium.

It was through Zephyrus that Boutiette and Breeding first were exposed to the entrepreneurial ecosystem in Maine. Recruited out of the Student Symposium and guided by the team at the Foster Center for Innovation, the two dove headfirst into the startup life and coursework in innovation. Though Zephyrus eventually wound down, Breeding and Boutiette were hooked on the entrepreneurial mindset and increasingly focused on developing a product that they felt could change people’s lives.

“As we thought about life after grad school, we came back to this product that had helped Amber relieve her eczema,” says Breeding. “What better thing could we work on than this new solution to a really irritating and painful problem that affects over 10 percent of the population?”

Officially launched in October 2020, Marin’s Soothing Hydration Cream represents a true labor of love for its founders, who spent hundreds of hours collecting the glycoprotein in the quantities needed to manufacture the company’s first batch of cream. Their dedication was swiftly answered by resounding consumer demand: Marin sold out of their initial inventory inside of two months and customers were clamoring for more of the cream.

For Boutiette, the positive response highlights a powerful need that she understands all too well.

“The beauty industry doesn’t cater very well to people with sensitive or problematic skin,” says Boutiette. “We really wanted to make sure that every single ingredient in this formula pulled its weight and that it functioned well and felt good to use along with being power-fully effective.” 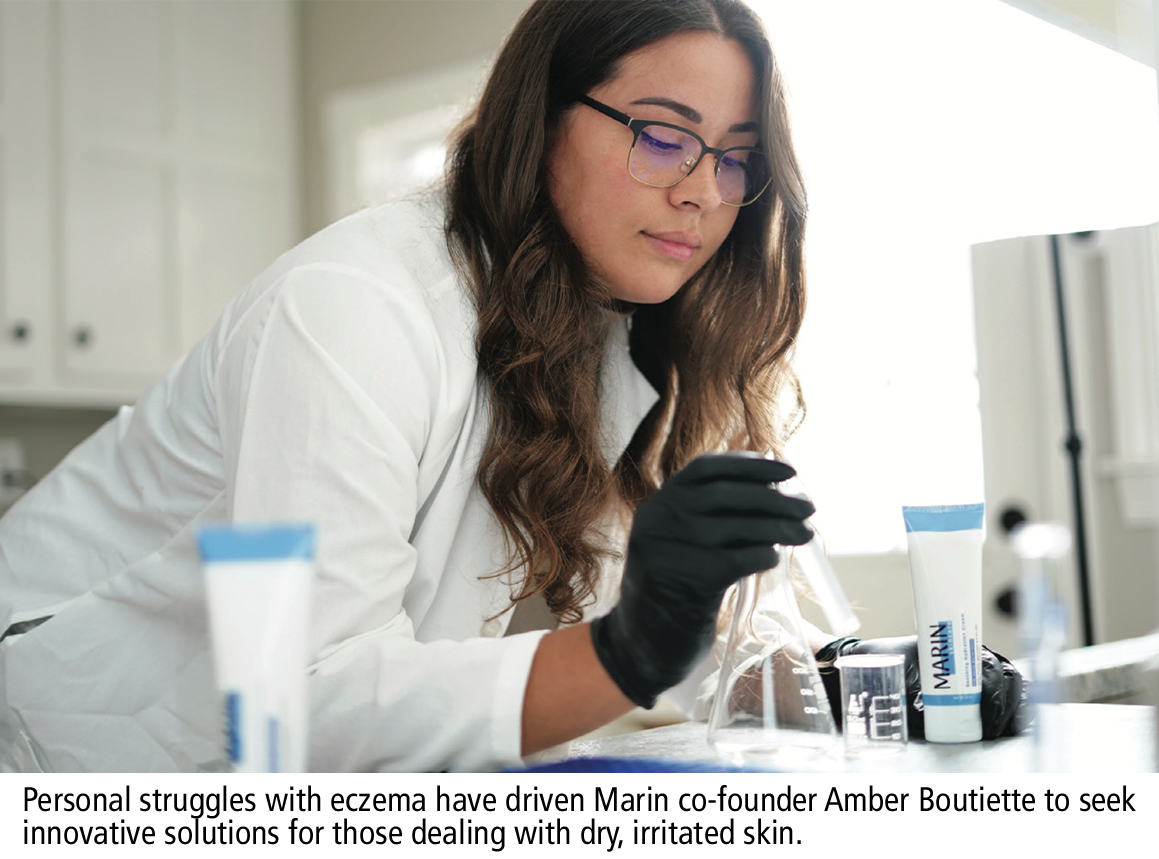 SINCE THE LAUNCH, Boutiette and Breeding have been singularly focused on scaling smart. A partnership with Luke’s Lobster Seafood Co. has formalized their supply chain for the glycoprotein, a major milestone and one that links them to a like-minded Maine company.

“Luke’s Lobster is consistently looking for innovative ways to find win-win solutions within the lobstering industry, from the moment lobsters are harvested to the finished products being created and marketed,” says Luke’s Lobster founder Luke Holden. “On the product side, we seek to use everything we can; whether that’s creating a plant fertilizer with lobster shells or a skin care product that truly helps people. Partnering with innovative companies like Marin is part of the overall equation that makes the lobster industry more robust and dynamic through a diversification of products. On a personal level, I enjoy working with entrepreneurs in Maine and helping them wherever I can.”

Breeding, a Connecticut native, and Boutiette, who grew up in Skowhegan, are both quick to credit Maine’s supportive and tight-knit entrepreneurial community, not to mention their crucial link to the lobster industry and enduring ties to their alma mater.

“In Maine, there’s this community of people that want you to succeed and will go out of their way to help you,” says Breeding. “It started at the Foster Center where we were gently pushed — pushed in the right direction, pushed to the right resource, pushed to the right thing we needed to learn. $e support mechanisms in Maine for startups are unique and the focus on economic development makes it very nurturing.”

Initial funding for Marin came through the Maine Technology Institute (MTI) and the Libra Future Fund, and the company also won a $14,000 grant as part of Maine Sea Grant’s Buoy Maine pitch competition, which is focused on strengthening coastal/marine seafood and tourism-related industries. A more recent $75,000 grant from MTI is helping Marin expand — the company recently hired its first full-time employee and is moving into a 3,000-square-foot office and warehouse space in Portland.

“We launched with the simple vision of helping others, but we could only envision what we could conceive at the time,” says Boutiette. “Now that we see how well our product is working, how many people are coming back to order and spreading the word, we’re on the path to become a nationally recognized brand, and we’re passionate about building it here in Maine.” M