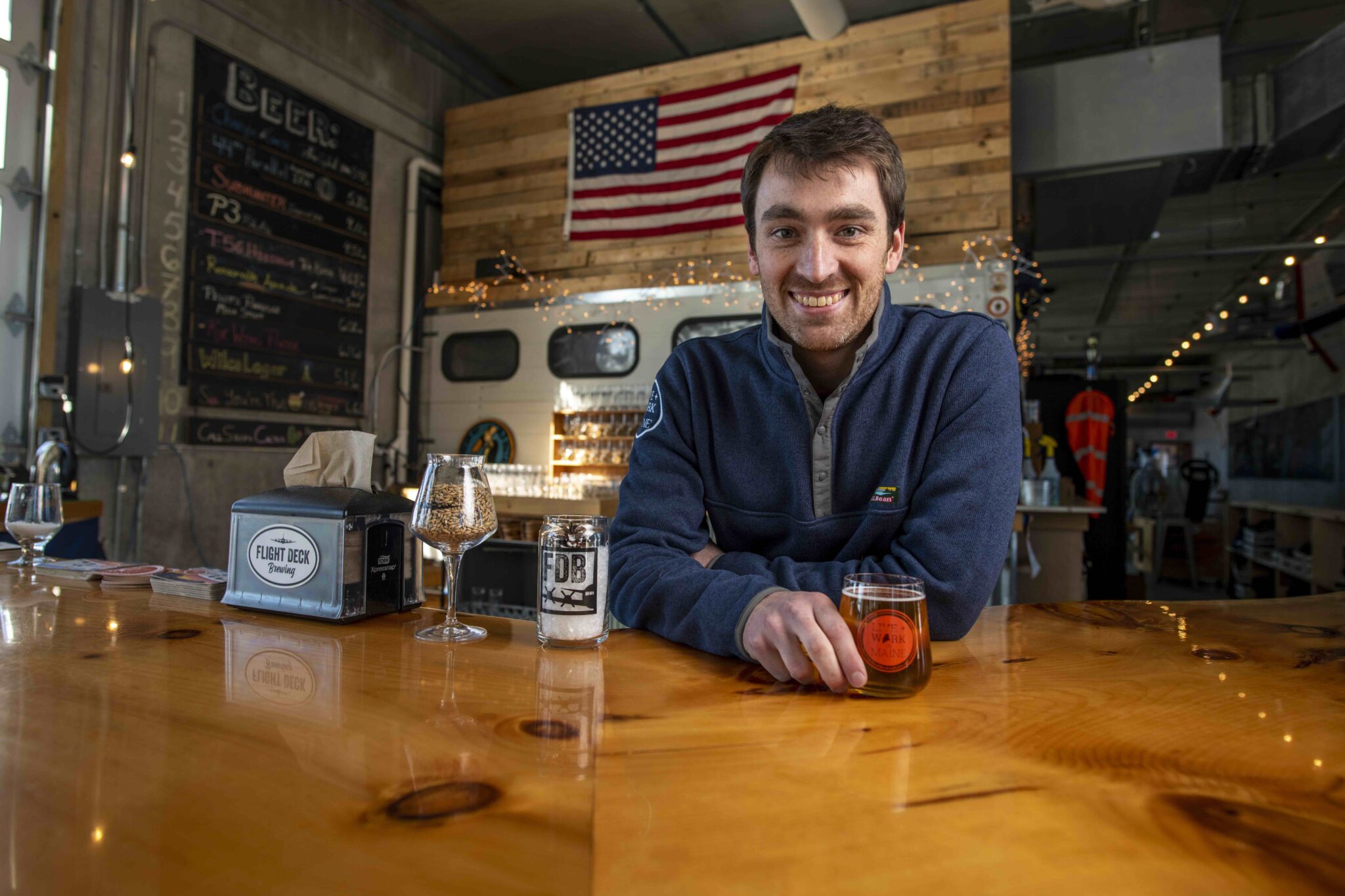 Wildes ’12 Innovates the Beer Scene, Maine, and Beyond

Black Bear alumni, faculty, staff, and students are among Maine’s most productive innovators and entrepreneurs. In this month’s column, Nate Wildes ‘12, executive director of Live + Work in Maine and co-founder of Flight Deck Brewing in Brunswick (three times recognized by Down East magazine as the state’s best taproom/tasting room), reflects on his time at UMaine and his experiences with innovation on campus and beyond. A political science major who minored in innovation, Wildes initially left Maine after graduation. When he returned two years later, he found himself seeking opportunities to make his home state an appealing and viable destination for other young professionals, and drawing on innovation skills cultivated at UMaine to realize that vision.

“When I was applying to college, I toured a variety of different institutions, from the small and far away to big and close by. I was hesitant about UMaine — my dad went there, and as many high schoolers sometimes feel, I wanted to ‘get out’ and have my own experience. When I visited campus, I met with Renee Kelly at the Foster Center for Innovation, and she was the one who showed me that the institution could be a lot of things that I was not aware it could be.

“The Innovation Center came to define my both day-to-day and my academic experience, because it gave me the resources and it provided the framework to fail fast and fail cheap at my own education. At the time, I didn’t know what to be passionate about, but I was excited by a lot. Through the Foster Center and the Innovation Engineering program, I was able to explore the world through a lot of different lenses, but always through the filter of what’s new and different. I started a business. I was a student employee at the Foster Center. It was a foundational part of my experience at UMaine, and the connections I made and the training I received there led to many opportunities outside of the center.

“I studied political science and Innovation Engineering, and had work experiences in both fields during and after school. As a student, I was a congressional intern in the office of Sen. Olympia Snowe. I loved every minute of it, but I realized DC wasn’t a career for me. After graduation, I had the rare opportunity to not just apply what I had studied, but to actually do what I had studied in a job at Eureka! Ranch with Doug Hall ’81, the founder of Innovation Engineering. I moved to Cincinnati and was in a different industry working with a different client every single week. I could not have asked for a better fire hose to drink from. I learned so much in the two years I spent there. Ultimately, I learned that Maine was home and that my true interest was in public service, which I was realizing could take many different forms.

“I got involved with Live + Work in Maine as a volunteer. Ed McKersie, the founder, had started it to speak to his own kids about the professional opportunities available in Maine, and it really hit a chord with me because I knew I wanted to be here and I knew there were other people out there who wanted to be here, I just didn’t know how to find them. At the time, Live + Work in Maine was not really an organization, it was more like a digital billboard, but I knew it could be a vehicle to make those connections and show people that they should want to be in Maine — that it’s a cool place where you can succeed. My first job, in sort of a brilliant extrapolation from my time at the Foster Center, was to figure out what Live + Work in Maine actually meant. It was a blank slate of opportunity to have a positive impact and it spoke to that desire to offer public service.

“Flight Deck Brewing came about in the midst of all this because I was so inspired by the things other people were doing around Maine to create communities and connect with other people. I was trying to walk my own talk, so to speak, and I saw an opportunity in the greater Harpswell/Brunswick/Bath area to open a space to meet neighbors and connect with other young people who are moving to the area.

“Innovation for me is a very precious word in that you can be innovative at anything and innovation can come from anything. On the Live + Work in Maine side, I’m using innovation in working with municipalities across the state that have very different profiles. An innovative idea or an impactful idea to attract and retain people does not look the same for Kennebunk as it does for Millinocket, but it can be rooted in the same. Innovation is both relative and relevant — it doesn’t have to be a new idea, it can be a new implementation of an existing idea, or a new result from that same idea.

“On the brewing side, sometimes it’s about taking a cool idea and actually being able to drink it at the end of the day. There’s a completion to that that’s very satisfying, and being part of that process means a lot. But it’s also applying innovation to how Flight Deck approaches traditional brewing procedures — like producing beer with 100 percent renewable energy — and employment practices. How do we tie together the fact that, as an organization, we have an obligation to give back as we produce? How do we show that the process can be intentionally beneficial, as well as the outcomes? My role at Flight Deck now is also about providing people leadership to a growing organization. I use innovation every day trying to create a place where people feel fulfilled by their careers and also want to be a part of the team. The goal is not to get people excited about working in beer, but to get people excited about working at Flight Deck. The difference maker comes in the combination of culture and benefits, and meaning. Our team has doubled in size — with very low turnover — every year or so since we started, and that trajectory is only sustainable if we have a place that people want to be. So, I am chronically thinking about how to make sure not just that people are happy, but that they are even more excited next week than they are this week.”