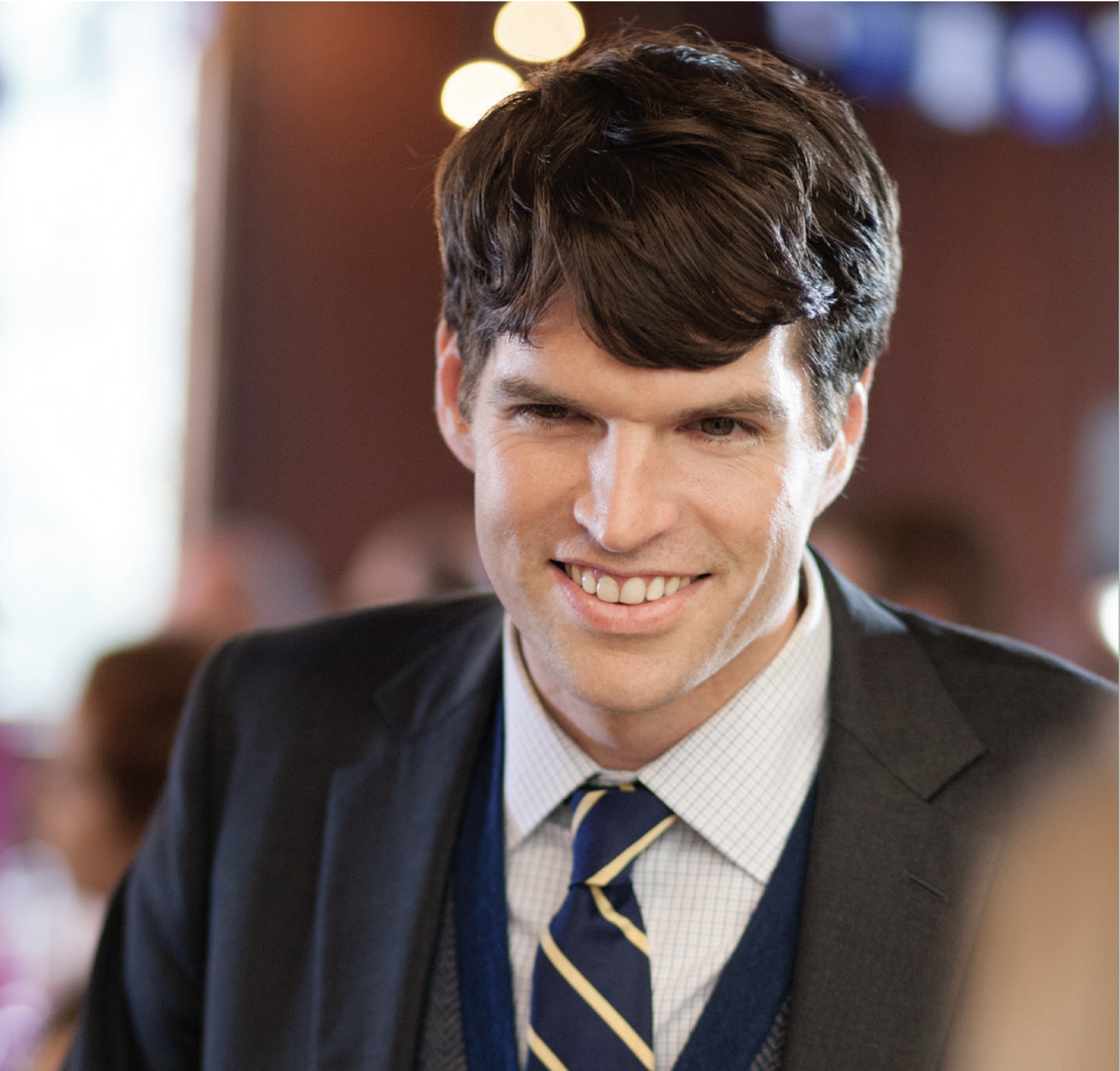 BEFORE HE WAS A part of the cast of one of the most acclaimed  television  comedies of all time — and even before he had any inkling he might make a career in show business — Timothy Simons was a young man from Readfield, Maine, looking for new friends during his first year at the University of Maine.

Simons, who plays the delightfully obnoxious Jonah Ryan on the multiple Emmy Award- winning HBO series Veep, was in 1998 a first-year student living in Gannett Hall, and was still deciding what to choose as a major. He saw a flier in the Memorial Union advertising for auditions for the Underdogs and Upperdogs, the yearly showcases for students in the under-graduate and graduate directing classes.

On a lark, he auditioned, thinking he might meet some new people and have a little fun. He had no idea it would change his life. 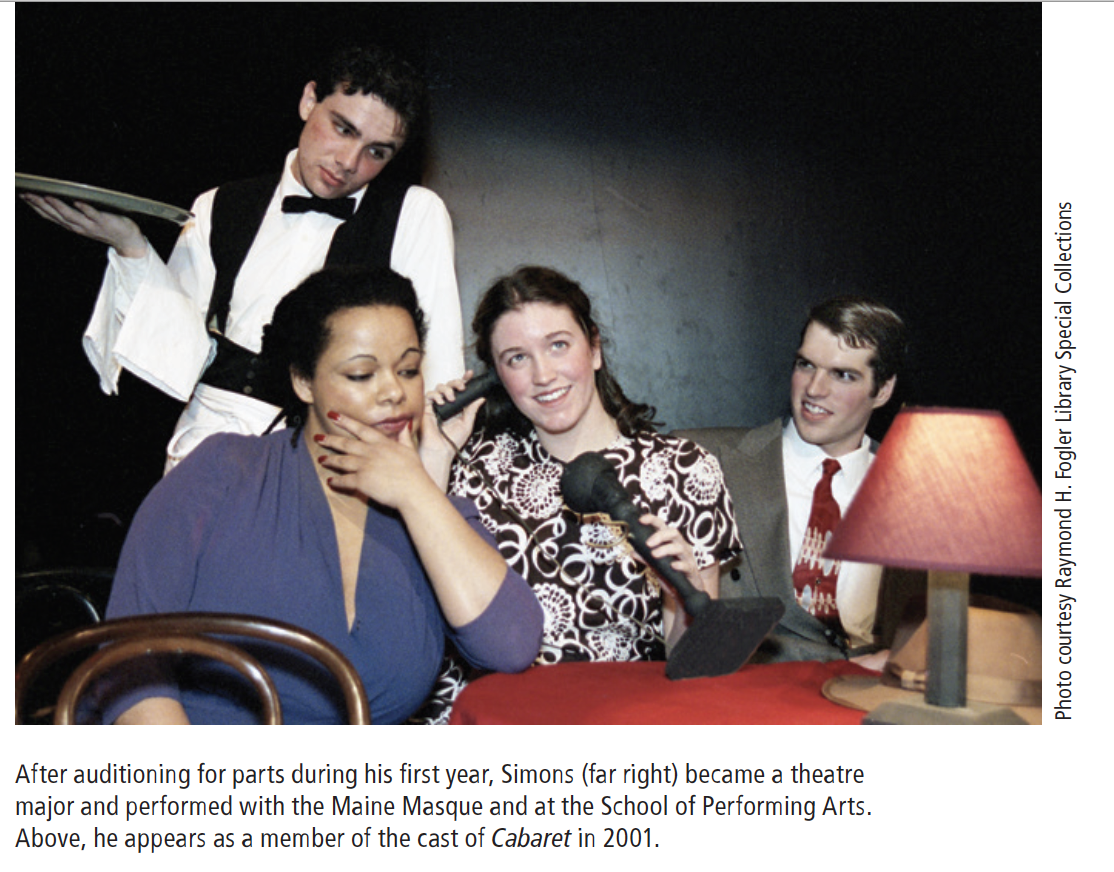 “I ended up loving it… I loved the community, I loved the experience, and I loved the Pavilion space itself,” said Simons, referring to the Cyrus Pavilion Theatre, the intimate theater-in-the-round on the back lawn of Fogler Library. “By the end of the experience I really was hooked. It was just a feeling of, ‘I’m gonna do that. This is my thing.’”

By his sophomore year, Simons was a theater major, taking classes with the School of Performing Arts’ three theater professors: Marcia Douglas, Tom Mikotowicz, and the late Sandra Hardy — the latter of whom had an enormous impact on Simons’ development as an actor.“Everyone has a certain special connection with their first acting teacher. For me, it was that you knew you were going to get the truth from her. Some people know when they are being lied to, and they’ll let people do it. Sandra would not stand for that,” said Simons. “She also prepped you for the amount of rejection you’d experience in the real world. She never let you half-ass it. She never let you be boring. Being boring was as big a sin to her as not learning your lines.”

Simons came back to UMaine in the sum- mer of 2014 to attend a memorial service on campus for his former professor — his first time back at his alma mater since graduating in 2001. He took home Hardy’s annotated copies of classics of 20th century theatre: Samuel Beckett’s Waiting for Godot and Eugene Ionesco’s Rhinoceros, both of which he treasures.

He also took a tour around campus, reminiscing about college memories — and noticing how much UMaine has changed in the years since he graduated.

“A bunch of us went around campus and checked out all the old places — the Pav, Hauck, everything. Everything was so different. The Union was unrecognizable,” said Simons. “I have to admit, the Bear’s Den being gone hurt a little bit… But what’s replaced it is really, really nice.”

AFTER GRADUATING IN 2001, Simons held countless jobs in Chicago and Los Angeles — thankfully, mostly in theater, or in industries adjacent to it.

“I was a cater waiter, I was a bartender, a barback. I built sets for plays,” said Simons. “One of the great things about UMaine was that I had a work-study job in the scene shop, and those skills really served me well through a decade of Chicago and L.A. I knew carpentry. I could do set load-in. When I first got to L.A., I jumped in on a set load-in at a fellow UMaine alum’s play. That led to jobs. I could pay the bills by doing things in the theater world, on or off stage.”

Simons’ big break came in 2010, nearly a decade after graduating from UMaine. After appearing in a GEICO commercial in which he (hilariously) played Abraham Lincoln, his name was passed along to a casting director for Armando Iannucci’s latest political sat- ire series, Veep. He auditioned for the role of Jonah multiple times — each time assuming he wouldn’t get the part — but in December 2010, he got the good news that he was cast.

THOUGH SIMONS WAS at the time the least-known actor in the main cast, he quickly became a fan favorite. Supercuts of the outrageously vulgar insults heaped upon the loud, awkward, wildly offensive Jonah have received hundreds of thou- sands of views on YouTube. When Jonah ran for the U.S. House of Representatives for New Hampshire in season five, the website created by HBO for his “run” was a viral hit.

For Simons, the brutal jabs on the show about his height, his face, his entire being are never humiliating — rather, they’re a joy.

“I knew what I was signing up for,” he said. “Now when my family watches they can’t wait for the next insult.”

Though Simons and his wife, Annie, and seven-year-old twins, Hopper and Marty, have been based in Los Angeles since 2008, most of Simons’ family still lives in Maine, including his sister, Lacy Simons, herself a UMaine alumna, who graduated in 1998 with a degree in English.

Simons’ role on Veep has led to a diverse array of opportunities in Holly– wood, including roles in the Seth Rogan and James Franco comedy The Interview, in the family comedy Goosebumps, and in director Paul Thomas Anderson’s Inherent Vice, an adaptation of the Thomas Pynchon novel.

Veep, however, remains Simons’ biggest success. Filming for season seven — the show’s last — began in August of this year, delayed from the usual shooting schedule due to Louis-Dreyfus’ treatment for breast cancer. After more than 50 episodes, the show has won countless awards, including 12 Emmy Awards, a Peabody Award, and three Screen Actors Guild nominations for best ensemble for Simons and the main cast.

“So few shows make it to the point we’ve made. I feel incredibly, incredi- bly lucky,” said Simons. “But I’m really excited to see what’s on the other side.”

Season seven of Veep will premiere in HBO sometime in mid-2019.