Below is an interesting profile story about one of our great classmates. Enjoy!

In 2016 David Sklar ’63 worked with the UMaine Foundation to develop a provision in his will to provide one million dollars to establish an endowed scholarship to support any UMaine student on a financial need basis. In 2019 he also started contributing $100,000 per year to start that fund, which is now over $300,000 and Dave has committed to continue this level of annual contributions.

The Class of ’63 has a number of interesting career/life stories and I contacted Dave to learn more about his accomplishments and motive for philanthropy.
We actually met when we were teens – most of my family’s clothes came from Ben Sklars in Old Town (we lived in Orono) and Dave started working in the shoe section of the family store when he was 13.

Dave developed exceptional sales and marketing skills and became a very successful retail professional after graduating from UMaine with a BS in Business Administration. He was a member of Beta Theta Pi, and it was in the fraternity that he saw the financial struggles of Brothers (and others) who could barely afford to stay in school. Providing support to UMaine students has remained a keen interest.

Dave became a successful clothing store owner, owning and operating stores in Old Town, Bangor, and Brewer over a 40-year period. In 2002 he liquidated the business and began trading stocks, bonds, closed end funds, options, and other financial instruments for his own account. He had been trading in the stock market for 30 years, but now began investing full time. Hard work paid off and Dave became (and still is) a highly successful investor. Emphasis on “highly” and don’t try this at home.

Dave’s other passion is Jewish history and attacking anti-Semitism. Dave’s father immigrated from Poland in 1920. His maternal grandmother came as a 27-year-old widow with three small children from Lithuania in 1911. Both families lost many relatives in their home countries to Nazi atrocities. Dave’s grandmother was a major influence in his understanding of the unimaginable treatment of Jews during the Holocaust. He was a founding member of the United States Holocaust Museum in Washington DC and in 2014 Dave made a $1 million bequest to the Museum to support its efforts to fight anti-Semitism. 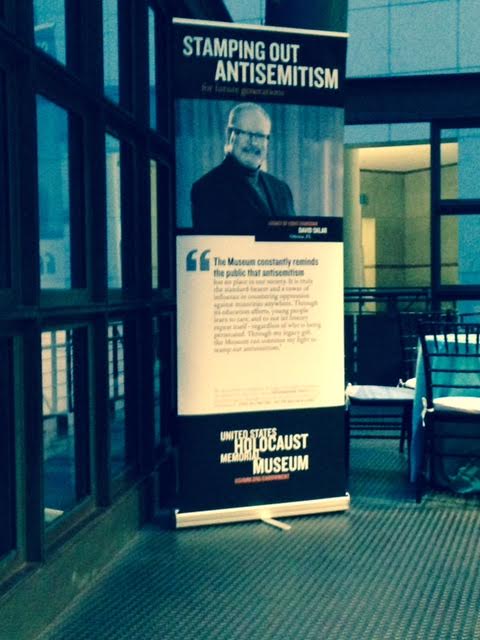 See above photo of a 6-foot tall version that is on display in the meeting room area of the Museum and see the Stamping Out Anti-Semitism poster here. To quote Dave “the bequest to the Museum was in honor of my twenty-two relatives murdered by the Nazis. I mourn their deaths and will never forget their poor souls.”

The Class of ’63 is very proud of Dave’s efforts to support UMaine students and counter the oppression of minorities anywhere.