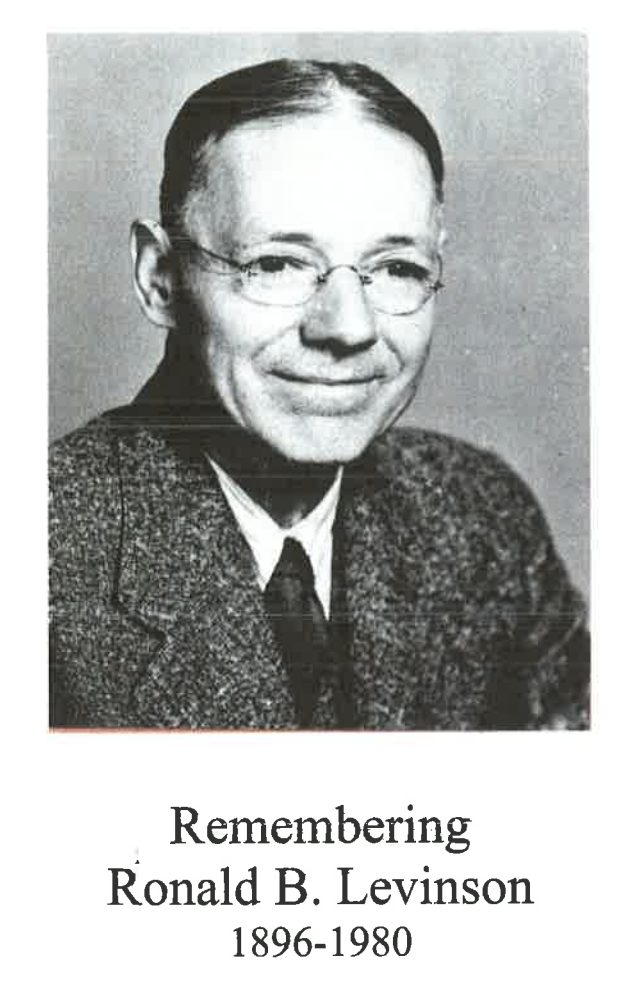 Fifty odd years have smudged from my memory the office number painted on the glass of his office door. What I do remember is Dr. Ronald B. Levinson standing and looking eastward out his office window. In the late 1950s the view eastward from the third floor of Stevens Hall at the University of Maine was of rising pasture fringed at the top with an apple orchard. On the day I am remembering, this view was all but hid by the driving snow of a northeaster. The wind flung the flakes in advancing fronts against the window panes.

Dr. Levinson is dressed in a rusty-red tweed suit complete with tie and vest. He is repeating the opening and resounding lines from Emerson The Snow Storm:

Announced by all the trumpets of the sky

That first stanza ends where we humans sometimes find ourselves:

How can we thank our teachers for gifts which last a life time?

Some years after I graduated from the University of Maine, when my family was rocked by a tumultuous storm of its own, Dr. Levinson wrote to share another quote this time from the poet Horace:

Remember when life’s path is steep

keep an even mind.

That quote would not have meant so much had I not known that Dr. Levinson had passed through his own days of anguish. As the years have passed, I have shared that line with many classes.

Twice a week for two academic years I met with Dr. Levinson for tutorial sessions. I read through the multiple volumes of W. T. Jones’ History of Western Philosophy midst side explorations into an intellectual topography as rich as a Persian carpet. And all the while, the portraits of the philosophers which formed a chronological border above the walls of books in his office, looked down upon us.

The books in his office library were crowded and often shelved in double rows­-one row behind the other. Dr. Levinson never had difficulty in finding the book he wanted even when it resided in a hidden row. The problem was remembering to replace the book in its correct place. He told me once that he had never seen a book replace itself correctly- a situation which he considered a part of the problem of evil.

He was as a master organ player, and his books were the “stops” to be pulled out and engaged so that their pipes might join in a growing orchestration. I should mention that he read as easily in Latin, Greek, German or French texts as he did in English. It was a marvel to me. He was born to erudition. He had what Plato might have described as a synoptic mind. In addition that mind had been shaped in demanding schools so that while he lived midst arching thoughts, no circumflex was misplaced.

During my first semester of study, Dr. Levinson gave me a copy of a book he had edited entitled The College Journey. It was intended as a freshman’s guide in a journey through the arts and sciences. On the flyleaf he had written: ”Bon Voyage … Sail bravely on two years before the mast. Then; home a master mariner at last.” This inscription was signed “Captain” Ronald B. Levinson.

My obtaining any degree of mastery was problematic; I was, unfortunately, neither endowed nor prepared to make full use of the tremendous opportunity I was being given. I remember Dr. Levinson once mentioned that his friend Julius Bixler, then president of Colby College, was one of the few who truly understood Whitehead. I was surprised that anyone did. Despite my empty spaces, my guide never lost his patience, and I, for my part never lost my appreciation of the scholarship I witnessed. This I learned: scholarship was intended to be a joy as well as an awesome responsibility.

There was a kindness in this man- a deep, quiet kindness as if it had been learned in a world which was too often unkind. There was interest as well. Emerson liked to ask his friends when he met them “What has become clear since we last met?” Dr. Levinson was equally anxious to hear and to celebrate his colleagues’ insights. I recall his excitement over a talk which artist and professor Vincent Hartgen had recently given to a faculty group. The topic had been Peter Bruegal’s Return of the Hunters. Producing a print of the painting, Dr. Levinson pointed out to me that the stark, black bird in flight was purposefully placed and that whole intricate composition presented a palpable cold, a frozen countryside, through which hunters moved with indomitable resolution.

Philosophy was for Dr. Levinson a rigorous undertaking necessary for the betterment of mankind. Its pathway was guarded round by the rules of rationality, and everywhere it was lit by the liberal arts and sciences. An entry in Who’s Who described him as a scholar of Greek philosophy ” … equally at home in the sciences and mathematics as well as the arts.”

He had served in World War One as a member of the Camouflage Corps and was sent to the Library of Congress as a researcher. Instead of having to shoot, he read; it was remarkable good fortune. In 1920, he graduated from Harvard and then went on to the University of Chicago from which he received his doctorate in philosophy magna cum laude in 1924. He taught at Harvard briefly before he was recruited by James Stevens, an energetic Dean at the University of Maine, who was trying to build a college of arts and sciences midst a realm of technology. Dr. Levinson was thirty when he came to Maine. He soon was the head of the new Philosophy Department and its principal professor.

His mentor had been Paul Shorey, a noted, classical philologist and Platonic scholar. Shorey’s internationally recognized mantle fell upon Dr. Levinson’s shoulders at the time when Karl Popper and others were hailing Plato as the first among totalitarians. In 1953, Harvard Press published Levinson’s In Defense of Plato. Following this major contribution, Houghton Mifflin asked him to edit A Plato Reader. The Reader appeared in 1967. By that date Dr. Levinson had retired from the University of Maine and his health had begun to fail.

Dr. Levinson lived in a square, dignified house on North Main Street in the college town of Orono, Maine. The front windows of that house looked down on the final flood of the Stillwater River before it pours over a dam and joins the Penobscot. Like his office, the room where he worked at his home was lined with books- rare books which he was to bequeath to the Special Collection at the university. I remember books and papers stacked by his easy chair waiting his return to his writing.

Sometimes Dr. Levinson would invite me for dinner. We would walk to his home from Stevens Hall. On one such walk and in the long light of a late winter afternoon, we passed a stand of tall, pine trees. Between those sun-bronzed trunks ran the blue shadows of early evening.

“The Numinous Woods,” remarked Dr. Levinson pointing to the pines.

I should go back to see if that stand of trees has escaped the campus spread; on second thought, there is no need to do so. What Dr. Levinson gave to us was not a particular genus loci but conceptions which might live in all places and at all times. Whenever I see blue shadows hustling evening between trees, I say to myself: “Behold, the “numinous woods,” and I remember “Captain” Ronald Levinson who gave his students so much that runs beyond the shadows.

We come to a college or university for facts, for life-long skills, and for something more – much more.