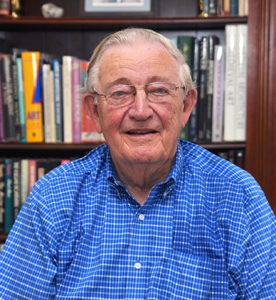 Leading up to our 60th class reunion in 2019, Blaine Moores will match each financial contribution we make to the Class of 1959 Scholarship Fund, dollar for dollar up to $50,000!

That means gifts to the Class of 1959 Scholarship Fund received between now and June 30, 2019, will have twice the impact!

*First preference to descendants of our class members!

I received some news from Christmas cards. Muffy Campbell Murphy and husband, Mike, spent their 20th winter at their home in Palm Springs, enjoying golf and the sun. During the summer they traveled to Montana, Walla Walla, and Seattle. Christmas is always spent back home in Spokane with family.

Joe and Pat Stiles Cuccaro continue to live in Falmouth and were joined at Christmas by their son and grandson from Atlanta.

The traveling duo of Frank ’58 and Pat Benner Keenan went to Yosemite and Iceland in 2015 and will be going to Central America in early 2016. At home in Great Falls, VA, Frank plays golf; Pat does yoga, and has just taken up bike riding! Judy Adams Gardiner, of Old Saybrook, CT, stays busy visiting grandchildren in Virginia and volunteering at home for church and the Katharine Hepburn Theater in Old Saybrook.

Rudy currently holds membership with the Atlantic Society of Fish & Wildlife Biologists, the Canadian Forestry Association and the Fredericton Botanic Gardens. He is also an active member of the Fredericton Nature Club, Golden Club, Stepping Stones Club, and Stamp Club.

Music is still a very large part of Rudy’s life. He plays the tuba and accordion in three local bands and also performs regularly with two singing groups.

Did you know that we have three wonderful honorary members of our class? Anne Adams Collins ’61, wife of our former class president Dick, is one. With him, she has been a huge supporter of many facets of UMaine—Collins Center for the Arts, the Alumni Association, athletics, etc. Other honorary members are Chris Corro, recently retired from the Alumni Association, who always helped with planning our class activities; and Don Cookson’s wife, Susan Mullaney Cookson, who has helped develop our communications, web site, and class pages.

Every year, Gary Priest and wife, Barbara, take a trip to a faraway place. In February of 2015, it was to Bhutan, India, and Nepal. They said being at the foot of the Himalayas was a thrill, but the cultural experience was “really fabulous.” They met a doctor in Nepal whose house was flattened by the massive earthquake in April, two months after their return. They have stayed in touch with him since.

Did you know that Will Farnham is a member of the Maine Ski Hall of Fame? Will has been a ski area coach, chief of course safety, regional director of the Maine Ski Patrol, has organized ski patrols, and been involved in junior racing. An interest in alpine skiing led to his promoting the organization of the Maine Alpine Racing Association. Will was inducted into the Hall of Fame in 2013.

Blaine Moores ’63G spent most of January and all of February 2015 in Arizona. He then took a March cruise out of Barcelona, continuing on to London. He celebrated his 60th reunion with Lee Academy classmates in August.

A deal is in the works to make a movie, No Backing Down, chronicling the 1994 Salem (MA) High School footballs team’s march to the Division 3A Super Bowl and head coach’s defiance of a cease-and-desist order by the superintendent of schools. (An 11-day teacher strike provoked the order). That head coach was Ken Perrone ’60G!

Don Cookson reports that Helen “Duckie” Inman Boomer and Kerry Foster have joined the class executive committee. Duckie has volunteered to take on the leadership role for our adoption of the Class of 2019, and Kerry has joined her adoption team.

There is a pioneer among us! Chuck Peddle is given credit as the “father of the first integrated personal computer.” Look him up through a Google search. There is an extensive article on his background, his connections with computer leaders like Steve Jobs and Bill Gates, his pioneering days at Motorola, and more. He graduated from Cony High in Augusta before attending UMaine.

Peggy Mahar Steck, our treasurer, conducted and completed a thorough review of our class financials during 2015, and has submitted recommendations for consideration and action this year. She has put many hours into her review, working closely with the UMAA.

Last May, Evie Stevens Smith ’87G and husband, Dave, traveled to Europe with a group of UMaine women’s basketball fans, the coach, and team. The team played several games in Italy and also enjoyed side trips.

The executive committee agrees that building our student scholarship fund and our annual scholarship award over the next three years is a major legacy goal for our class. Our current fund level only produces one $1,000 or two $500 awards annually. You will be hearing more about this. The committee is seeking a leader for this goal. Interested? Contact Don Cookson at cncdec@aol.com.