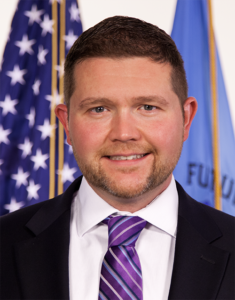 George Pullen ’03 is an example of a person whose exposure to a co-curricular opportunity in college has played a major role in the arc of his professional career.

As an undergraduate at UMaine, George took an interest in joining a student investment club known as SPIFFY. Affiliated with the Maine Business School of UMaine, members of SPIFFY manage an investment portfolio on behalf of the University of Maine Foundation. Starting in 1993 with $200,000 in assets, SPIFFY’s portfolio has grown to nearly $3 million in value.

George’s hands-on experience with SPIFFY in college eventually led him to a position with the U.S. Commodity Futures Trading Commission (CFTC), an independent federal regulatory agency that monitors the multi-trillion dollar futures and options markets. Currently George serves as a senior economist for the organization, specializing in energy derivatives. His research allows for collaboration on policymaking with key financial regulators including the Federal Reserve, the Department of the Treasury, and the Securities and Exchange Commission.

Commissioners and their counsels at the CFTC routinely consult George when formulating policy and implementing actions that directly impact the energy markets. His colleagues praise his abilities to boil down intricate subjects and policies to those who might not have a background in economics.

Prior to working at the CFTC, George held several high-ranking positions in a number of financial institutions as a banker, portfolio manager, broker, investor, and trader for domestic banks and hedge funds. He also has over seven years of federal civilian service and over five years with the United States Marine Corps Reserves.

Now living in Montgomery Village, Maryland, George’s professional life is still young. Given the trajectory of the past 15 years, his career path can be expected to take him to greater heights.