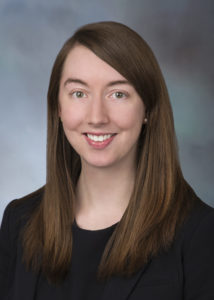 For Hannah Hudson ’12, ’14G, advocacy on behalf of UMaine and its students hasn’t decreased since her days as a student leader.  The Columbia Falls, Maine, native remains a vocal promoter of the university and opportunities and value it offers.

Hannah is currently the president of the alumnae chapter of All Maine Women (AMW), the select group of UMaine seniors chosen for their leadership, community service, school spirit, and potential for continued service to UMaine. As leader of AMW alumnae, Hannah works with current and past members to promote leadership, professional development, philanthropy, and continued engagement with UMaine alumni and friends.

Hannah recently was appointed to the University of Maine’s Board of Visitors, the legislatively established entity that advises UMaine’s president on budget, policy, and advocacy matters. In addition, she also serves on the Class of 2012 council. Though Hannah now lives and works in Washington, D.C., she makes regular visits to Maine and to the UMaine campus.

Hannah earned her bachelor’s degree in international affairs with a concentration in Spanish. Hannah later received her master’s in global studies. While on campus she worked with UMaine’s Career Center advising students with international careers and internships.  Both her degrees and her work with the Career Center proved relevant to her current position as a senior associate at The Cohen Group, an international business advisory firm based in Washington, D.C., founded by former U.S. Senator and Secretary of Defense William S. Cohen ‘75 Hon. LLD.

She also serves, in a volunteer capacity, on the board of UMaine’s Cohen Institute for Leadership & Public Service. As explained on its website, the Cohen Institute trains future leaders in a variety of disciplines to be ethical, visionary, innovative, civil, thoughtful, and independent minded in the service of Maine, the United States, and the world.