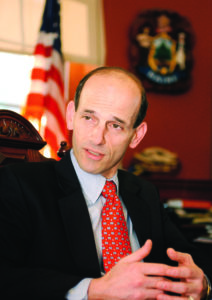 The Honorable John E. Baldacci grew up in Bangor, the son of Bob and Rosemary Baldacci, both of whom were strong advocates for higher education and community involvement. Following in his father’s footsteps as both a businessman and public servant, John was elected to the Bangor City Council at the age of 23. He was later elected to the Maine State Senate.

During his Senate years, as a nontraditional student at UMaine, John juggled academics and work in the family’s Bangor restaurant. He was still serving in the Senate and serving, in a different way, at the restaurant when he completed his UMaine bachelor’s degree in 1986.

After 12 years in the Maine Senate, John won a seat in the U.S. House of Representatives. His tenure in Washington included four terms, from 1995 to 2003, during which he served on the Agriculture Committee and the Committee on Transportation and Infrastructure.

In 2003 Baldacci left Washington to become Maine’s 73rd governor, and served for two terms. As governor, he was credited with overhauling Maine’s healthcare system, revamping Maine’s technical colleges to create the Maine Community College System, and creating Pine Tree Development Zones to trigger economic development opportunity in areas that needed it the most. He worked to fill an inherited $1.2 billion state budget deficit, promoted alternative energies, and advocated for increased investment in research and development at the University of Maine.

During his second term he introduced civil rights legislation to prevent discrimination based on gender and sexual orientation. Same-sex marriage became legal in Maine through a public referendum. John signed the act into law.

Today John is senior advisor for economic development and government relations for the Portland-based firm of Pierce Atwood, LLP. John is one of seven Baldacci siblings who hold UMaine degrees. His wife, Karen, and their son, Jack, are also UMaine alumni.