ON A BRIGHT FEBRUARY MORNING, under a blue sky that seemed to hold the promise of spring, Aislinn Sarnacki ’10 strode through a white pine forest at the Stover Preserve in Belfast and down to the snowy banks of the Passagassawakeag River.

Sarnacki, a Bangor Daily News re­port­er, is familiar to many outdoor enthusiasts in Maine and beyond because of her blog, “Act Out With Aislinn,” and her popular “1-Minute Adventures” video series. On this particular day,
she was in her element: the woods of Maine. Her signature long blonde braid bouncing, she pointed out animal tracks in the snow, scrambled down to the river to take photos of the ice formations, and exclaimed with delight when
she spotted a golden birch.

“It’s my favorite tree,” she said.

And although it was a chilly day, it felt good to her to be in nature. It always does, said the 30-year-old Sarnacki. It was that way even when she was a curious child wandering the woods and fields that surrounded her home at the end of a long, dirt road in Winterport.

“I spent all my time outside,” she said of those years. “I would just go out in the woods. I’d pop out somewhere, miles down the road, in someone’s yard. I would get lost quite often.”

She lost a bit of that outdoor moxie in high school, when it seemed cooler to play team sports than to roam the woods. But she got it back as a student at the University of Maine. Just in time, she believes.

That’s because Sarnacki thinks that hiking, and nature, helped her when she hit a personal rough patch during college.

It may have even saved her life. 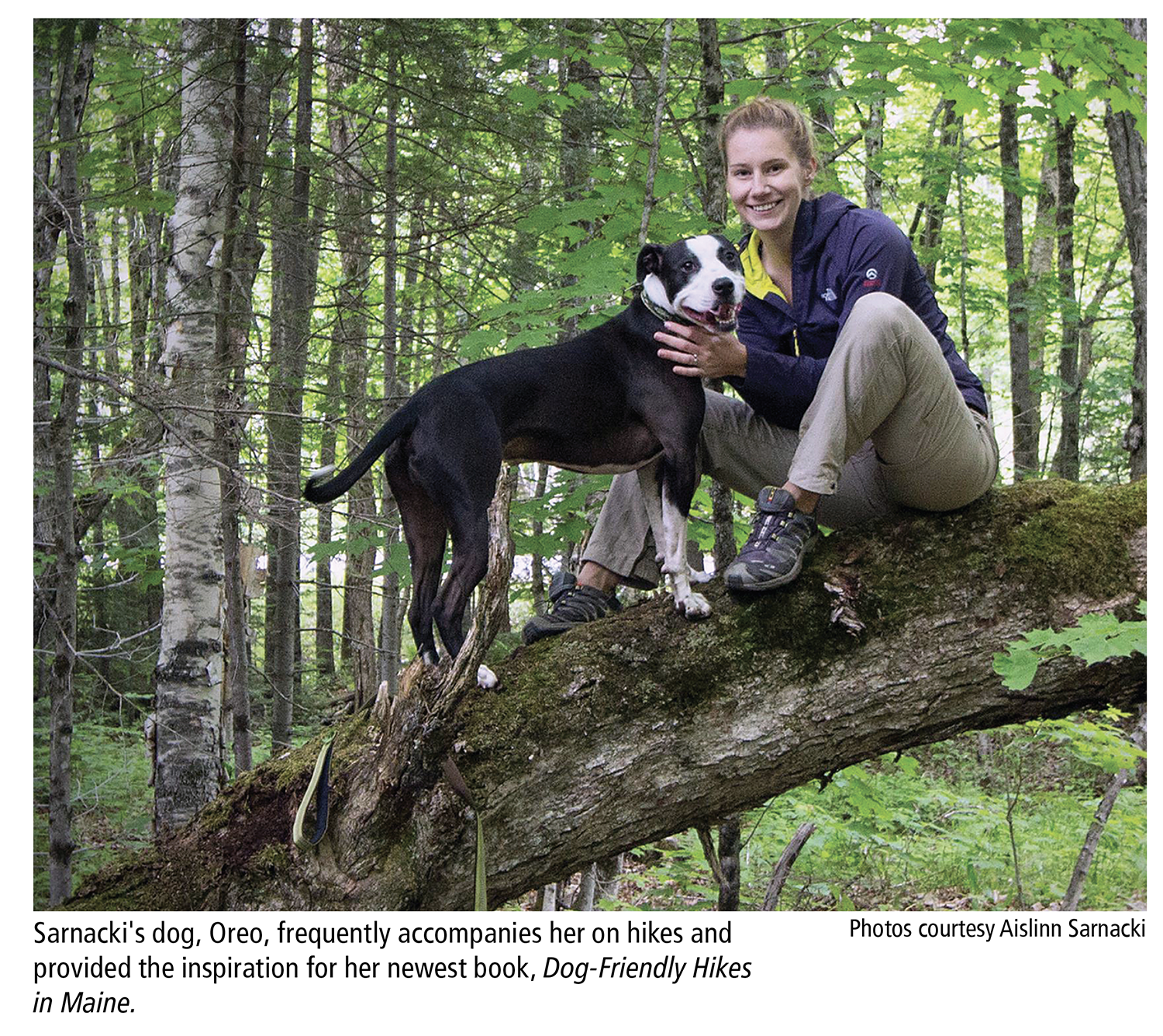 At UMaine, Sarnacki was a communications major who belonged to the Honors College, where the small class sizes, group discussions, and closer relationships with other students and professors were a good fit.

“That really made my UMaine career more challenging and fulfilling,” she said. “It’s very much like a liberal arts education.”

She took courses that mattered, in­cluding journalism ethics and a seminar on the works of literary non-fiction writer John MacPhee, whose focus on the natural world she loved. She also worked for the Maine Campus, where she held down the police beat for three years.

“I would meet with the campus police officer once a week, and write down whatever crazy things the students had gotten into that week,” she said. “It was a lot of fun.”

But when she was a junior, things took a left-hand turn. Sarnacki was struggling with depression, social anxiety, and an eating disorder. She lost frightening amounts of weight and felt like her life was out of her control.

“It’s hard not to be depressed when you’re like, ‘yup, I’m dying,’” Sarnacki said. “It’s not good. I looked like I was sick. I don’t know if people thought I had cancer. I remember I looked so sick that I didn’t like being in public very much.”

But she found healing in nature. The summer after her junior year, Sarnacki set her sights on getting better. She went on expeditions by herself, starting with a short hike up Chick Hill in Clifton, east of Bangor. Her pace was excruciatingly slow. But she did it.

“I remember that it was hard for me to get up Chick Hill,” she said, adding that she didn’t let that dissuade her. “You don’t get judged when you’re in the woods. You feel at home and comfortable and safe. I felt that nature was very nourishing. I almost felt that it cared about me.”

Over the summer, she kept on hiking. She set goals, and knew if she wanted to be strong enough to meet them she had to take care of herself.

It was a deeply personal journey, one she didn’t plan to write about. But her thesis advisor, Mimi Killinger ’04 Ph.D., reacted strongly when she saw how Sarnacki had changed when school began that fall.

“She started crying when she saw me,” Sarnacki said. “Initially, we just talked about what the heck happened that summer. I told her about spending time outside and how it had really affected me. She said, ‘That needs to be your thesis.’”

Killinger, an associate professor in the Honors College at the University of Maine and the Rezendes Preceptor for the Arts, said that she had been worried.

“I was concerned about her health,” the professor said, adding that when school started again, she was blown away. “Aislinn had transformed. I at that point asked, ‘What’s the story really about?’ And she said it was about getting healthy. Getting well. There’s just an authenticity there that’s incredibly powerful.”

Sarnacki ended up writing a deeply reported memoir for her Honors thesis about how hiking can affect a person’s mental, physical, and emotional health. The academic world often frowns upon first-person writing, but Killinger knew Sarnacki could pull it off.

“Aislinn stood out for being meticulous with her work, a voracious reader, a talented writer, and just had that quintessential Maine work ethic,” the professor said.

The thesis did not disappoint, and Killinger has used it as a resource over the years for other students coping with challenges.

“Aislinn’s story gave me access to information that made me a better educator,” she said. 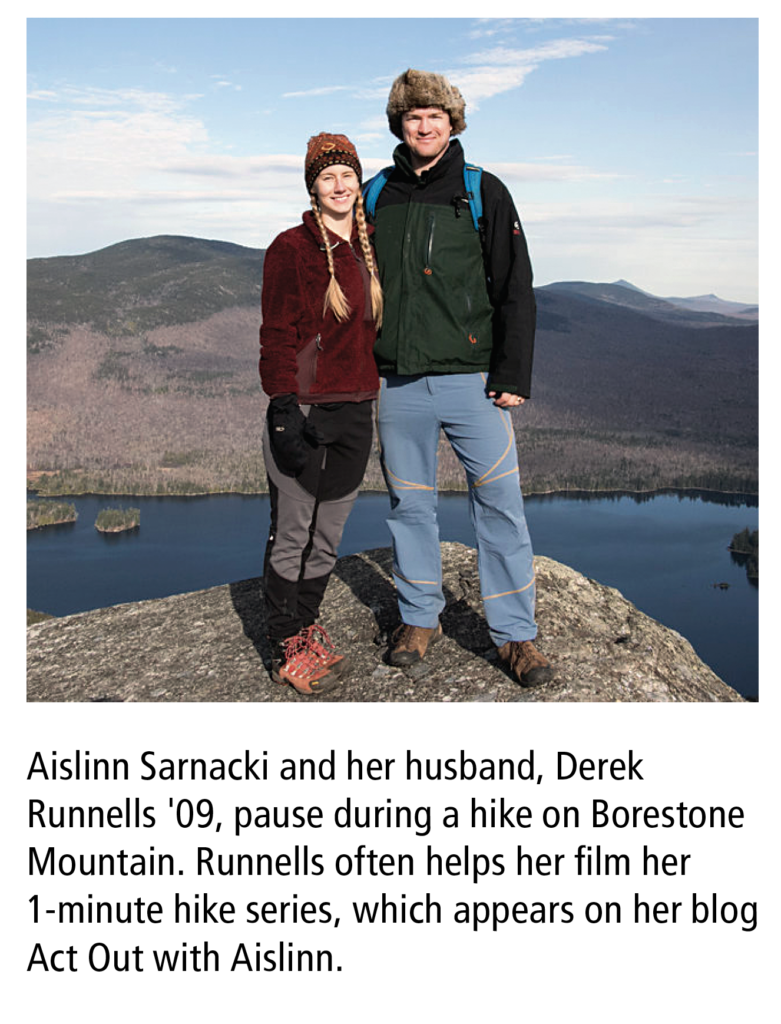 After Sarnacki graduated, she was hired as a copy desk intern at the Bangor Daily News. She did well there, quickly becoming a full-time reporter and then one of the paper’s first two bloggers. When her editor asked her for a topic for the weekly videos she needed to produce, it wasn’t hard to decide.

“I thought about what I knew about and what people might value, and what was inexpensive,” she said. “For hiking, you only need a pair of boots. So I went on a hike and I took a really terrible video.”

It was November — late in the hiking season. Sarnacki had to learn on the fly about winter hiking, photography, and videography. Eventually, the videos got better, and she began to learn who was watching and why. Initially, she figured hikers would use them as a trail resource, but she had another audience, too.

“I started to get feedback from a lot of viewers who were in their 70s and 80s, who were watching the videos as a way to get outside and see some of the places they maybe saw as kids,” she said.

In response, she changed how she documented her adventures. Now, if she finds an especially beautiful spot, she’ll pan the camera around, because she knows that there are people who simply want to virtually spend a little time in those places.

“I feel very lucky. I interact so much with readers,” Sarnacki said. “A lot of people email me through the blog to ask me questions or share stories. It’s really cool when they do that.”

Sarnacki’s work at the Bangor Daily News has not gone unnoticed. In 2012, she was the recipient of the Bob Drake Young Writer Award, presented each year to a young journalist whose work demonstrates ability and great potential. She also was named the top features and lifestyle blogger in Maine by the Maine Press Association in 2014 and 2016.

“Aislinn has an incredible amount of knowledge about the Maine outdoors and Maine trails,” Sarah Walker Caron, the senior features editor at the Bangor Daily News, said. “She really opens up the door to the outdoors for our audience. I love hearing from people who do her hikes, or who live vicariously through them. Maybe they can’t hike anymore, but they can appreciate the outdoors through her.”

Sarnacki knew she wanted to write a book about hiking when her readers started showing up at sportsmen’s shows toting scrapbooks they had made by cutting out her columns and pasting them in. So far, she has written Family Friendly Hikes in Maine and Maine Hikes Off the Beaten Path, both published in the last couple of years by Down East Books.

Her most recent book is inspired by her dog, Oreo, who is so popular among readers as a character on her blog that she turned one of his paw prints into a custom-made stamp she uses to sign her books. It is called Dog-Friendly Hikes in Maine and was published this spring.

After that, she hopes to tackle another project: rewriting and expanding her Honors thesis into a book. Over the last decade, her work has only solidified the idea that spending time outdoors can be a pathway to health. One reader, an overweight man with diabetes, told her that he followed every single hike and lost something like 100 pounds. Another, a woman who had cancer, said when she was at her sickest, the videos helped her get through.

“I teared up when she told me that,” Sarnacki said.

After years of hiking, writing, and sharing stories with Mainers and beyond, it’s clear that journalism has given her what she dreamed of when she was a student at the University of Maine.