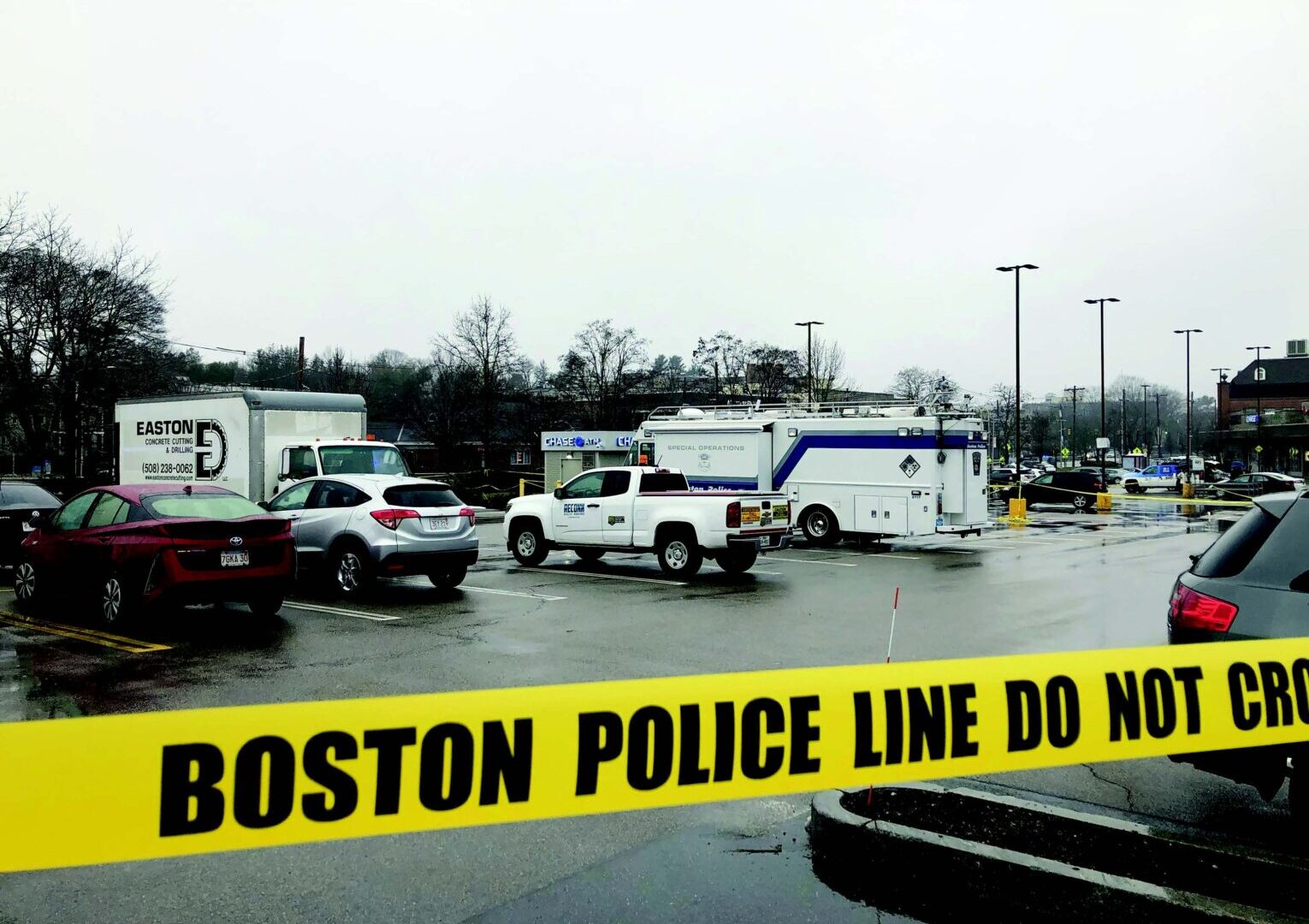 Black Bear on the Blue Line

BRENDAN WALSH ’00 has long held a reputation as an enforcer.

Two decades ago, he patrolled the ice of Alfond Arena as a tough-as-nails member of UMaine men’s ice hockey team, the 1999 NCAA national champions.

Today, Walsh polices a different territory as a detective with the Boston Police Department. The 46-year-old Massachusetts native is part of the department’s drug control unit based in Boston’s Roxbury neighborhood, just about five miles from Dorchester, where he grew up. It’s also about five miles in another direction from Boston University, where Walsh began his college hockey career.

But when things didn’t work out as planned for Walsh, the hard-nosed center left BU after two years, seeking greener pastures. He found them, figuratively and literally, in Orono.

Walsh transferred to UMaine and relocated to Orono, a far cry from the urban environment of the BU campus.

He was referring to well-known Commonwealth Avenue in Boston.

But Orono had its charms, he discovered.

“I loved the community aspect of it,” Walsh said. “People in the community knew the students. And a lot of people went to the hockey games.

“It was a more personal experience. You never felt lost like you would in a gigantic university setting. And I am a social butterfly who likes to connect with people,” said Walsh.

Walsh had been approached by other schools but he always had UMaine on his radar for a number of reasons. He might have come to UMaine initially but the hockey program was hit with sanctions for violating NCAA rules including a two-year exclusion from playing in the NCAA Tournament.

He said he knew how special UMaine was and admitted that he was “a little in awe” watching Hobey Baker Award winner Paul Kariya ’96 and the 1992-93 team go 42-1-2 and win the school’s first NCAA championship.

The program’s tradition of excellence, the statewide support for it, and the quality of the coaching staff were other vital ingredients in his decision.

Head coach Shawn Walsh’s charisma, intensity, and attention to detail were appealing to him.

“Our goal at Maine was to win a national title and Shawn had a model (to accomplish it),” said Brendan Walsh, who had played on highly successful teams his entire career, including a Clark Cup (playoff) championship team with Omaha in the United States Hockey League.

He wanted to play for a team with NCAA title expectations rather than a rebuilding one.

He was also a fan of assistant coach and recruiting coordinator Grant Standbrook, who coached him at an Olympic festival. Walsh and Standbrook’s team won the festival championship because Standbrook utilized a disciplined left-wing lock system while all the other teams were freelancing to showcase the talent of their players.

Standbrook’s remarkable knowledge of the game and his ability to teach his players so many useful tidbits were enticing, also.

WALSH HAD TO sit out the 1997-98 season due to the NCAA transfer rules but he was able to practice with the team and play exhibition games. Shawn Walsh also kept him engaged in the program by having him host some important recruits like future teammates Doug Janik ’02, Niko Dimitrakos ’02, and Barrett Heisten ’02.

And he served a valuable purpose on the scout team, which mimics the upcoming opponent’s style of play and its personnel.

“I got to pretend to be Jeff Farkas, Brian Gionta, and Jason Krog,” said Walsh referring to Boston College stars Farkas and Gionta and New Hampshire’s Krog.

Walsh had seven goals and 13 assists for 20 points in 30 games but his intensity, energy, leadership, and physical play served as a nice complement to UMaine’s skilled players. He reinjured his knee in the 2-1 win over Boston College in the Frozen Four semifinals in Anaheim, California, so he missed the 3-2 overtime win over New Hampshire in the championship game.

“To be a part of that program that year and to win it was incredible,” he added.

UMaine, despite having fewer than the 18 allotted scholarships due to lingering NCAA sanctions, finished 31-6-4. He was named co-captain the following year and again played an important role as the Black Bears returned to the Frozen Four, where they lost to eventual NCAA champ North Dakota 2-0 in the semifinals.

Two of his UMaine teammates were Ben Guite ’00, ’09G and Alfie Michaud ’00, who are on the current UMaine staff as associate head coach and assistant, respectively.

They said he played a vital role in the program’s success.

“Brendan had that ability to bring everyone together,” Guite said. “He was an extension of Coach Walsh. Guys gravitated towards him. He was tough so guys wouldn’t cross him but you could also go to him with personal issues you had.

“He would have done anything for any of us. He was also a really good player. He could contribute offensively and he scratched and clawed for everything. We were no fun to play against and he embodied that.”

Michaud called him “as good a human being as you could ever meet.

“He was a true leader who made sure everyone was taken care of before himself. He kept everyone accountable in the locker room and off the ice,” Michaud said.

Michaud said Walsh was “tough as nails” but he was also one of the funniest people he ever met and “kept things light in the dressing room” until it was time to focus on practice or the game.

“He could shut down the other team’s top players and he could also play on our top line. He was like a Swiss Army knife. He was definitely the glue to our room. He could read a person and could relate to every one of us and make you feel you were just as important as the rest,” Michaud added.

He had a five-year minor league hockey career in which he amassed 1,385 penalty minutes and 68 points in 245 games while serving as a high-energy player who fought often.

“Being undersized (5-foot-10, 201 pounds), I had to play with an edge. Fighting didn’t bother me. I had to protect my teammates and play with pace and tempo,” he explained.

HE SERVED AS an assistant coach at Northeastern University under former UMaine interim head coach and assistant Greg Cronin ’90G for a year and a half.

He left when he earned a spot in the police academy in 2006.

He was promoted to detective a year ago and loves his job while also admitting that the COVID-19 pandemic and the protests stemming from the George Floyd murder have made his job more challenging.

Walsh said “being on the police force is very much like being on an athletic team as you and your colleagues have to work together toward a common goal, which is preventing or solving a crime.“

He said he uses what he learned from earning a degree in communications from UMaine “every single day.” And the late Shawn Walsh’s communication skills have been valuable.

“Shawn could have run a Fortune 500 company. He knew how to handle different personalities. He built relationships,” said Brendan Walsh, whose career path was also influenced by his firefighter father Michael, of whom he is very proud.

Brendan Walsh said he has learned the importance of defusing situations and how to use his communication skills to do just that.

He said police work isn’t as glamorous as it is depicted on television because there is a lot of paperwork involved.

But he loves his fellow police officers and living in the Boston area with wife, Sara, and hockey-playing daughters Stella, who is 11, and seven-year-old Lucy.

“Stella wants to be a Black Bear,” he said proudly.

He and his family thoroughly enjoy outdoor activities and he credits his three years in Maine for his appreciation of the outdoors.

An earlier version of this story was published on May 9, 2020 in the Bangor Daily News. Updated and reproduced with permission. Header photo credit: Abby Patkin, USA Today Network