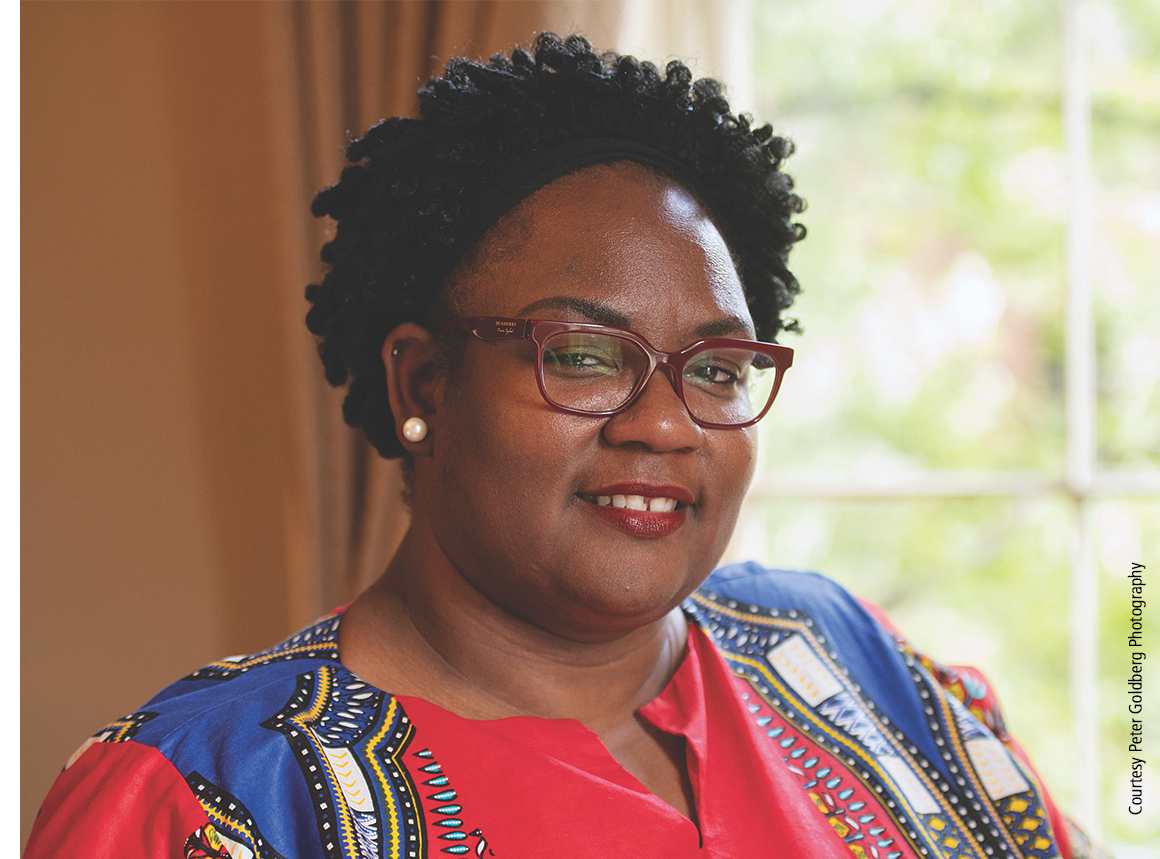 From Activist to Authority

ASK ANY COLLEGE or university administrator to list priorities, and you’ll likely hear some combination of these answers: Academic excellence. Access. Innovation.

Ask Shontay Delalue ’00, ’03G? She has something important to add.

As a national authority on issues of diversity, equity, and inclusion in higher education, Delalue understands that words matter, and her choice here — as always — is deliberate: Diversity as central. Not additional.

“We’re trying to shift the conversation to say you can’t have excellence and innovation without representation and structural change,” she says. “Historically, higher education was not created for certain individuals, and we need to ensure that the landscape changes in a way that opens access and cultivates supportive environments for individuals from underrepresented groups.”

At Brown, Delalue is charged with driving that change by providing strategic oversight of the policies, practices, and structures that promote the inclusion of all members of the campus community.

“She’s not only doing diversity work — her role is much more expansive,” says Brown University President Christina Paxson. “Having her as part of the broader conversation means she’s allowed to contribute to everything.

“Her perspective on things influences everyone and everything on campus,” adds Paxson. “She brings an analytic clarity to what she does and that has helped her gain remarkable credibility and trust among students, faculty, staff, senior administrators, and board members.”

No small task. But Delalue has never been one to shy away from a challenge.

She grew up in New Jersey about 20 miles outside of New York City. While she takes great pride in the neighborhood where she grew up, she now realizes her high school lacked certain resources to prepare students for life after high school. Although she was an honors student from a low-income background, she was never encouraged to pursue an Ivy League education even though those institutions provide need-based financial aid.

Delalue noticed a very small group of her peers in high school getting opportunities to attend college prep programs that somehow eluded her. She decided to advocate for herself and was allowed to attend the Hugh O’Brian Youth Leadership (HOBY) program in her sophomore year. Little did she know that the HOBY weekend would open the door to her Black Bear experience.

When the time came to make a decision as to what college to attend, she had to choose between Rutgers University, the University of Maine, and her first choice,  Hampton University, a historically black college in Virginia. The University of Maine gave her a better financial aid package — including a full academic tuition scholarship — which helped her family make the final decision. Though she was not familiar with UMaine, she later learned that the admissions office took an interest in academically talented students who had participated in the HOBY program.

“That guidance counselor’s attempt to dismiss me turned into an opportunity I could never put into words,” Delalue recalls. “Making the decision to go to Maine despite the lack of support changed my life.”

That’s not to say the transition was seamless. She had classmates who had never interacted with a person of color before. She was lumped together with black international students where peers didn’t understand the rich diversity that existed across the African diaspora.

Eventually, she found her major (communications), and her niche (leadership). She shared her personal story in classrooms and discovered a love for public speaking. She became a vocal advocate for underrepresented students who were not always at the table. And it laid the foundation for everything that followed.

“I had to quickly develop a broader sense of the country and the world,” she recalls. “I gained cultural humility. I realized that I had the skill and experience of engaging with people different from me, but I still had limits to my own knowledge. That’s where it was implanted in me that diversity, equity, and inclusion work was important.”

She went on to work in college admission — first at her alma mater, recruiting minority students to join the Black Bear ranks —  and later as director of admission at University of Alaska Southeast. In 2005, she returned to the East Coast, where she worked at a high school as a counselor and then pursued a Ph.D. in education in a joint program run by the University of Rhode Island and Rhode Island College while working full time as the director of an intercultural center at Bryant University. In 2013, she began working at Brown as associate dean of international student experience and later moved to the provost’s office.

“While I have a depth of experience across the institution from admissions, to advising, to international affairs, my work is fundamentally grounded in race,” Delalue says. “I believe one of the things that impedes us on campus and in the country at large is our discomfort with grappling with race. Dr. Kimberly Richards said, ‘Race is the glue that holds class together,’ and I believe that.”

HER SCHOLARLY RESEARCH focuses on African and Caribbean students who are racialized as black within a U.S. context. In January, as part of a course on The African Atlantic Diaspora: Race, Memory, Identity and Belonging, which Delalue teaches in her American Studies faculty role at Brown, she traveled with a small group of students to Ghana, where visits to slave castles, cemeteries, and monuments drove home history of the transatlantic slave trade in a site-specific way.

“We all have very different notions of what blackness means,” says Delalue. “How is race created? How is it constructed? How is the slave trade connected with the way race is contextualized today? How do people in other countries think about race?”

And connecting Delalue’s research and her day-to-day work, how have race — and other facets of diversity — shaped the history of U.S. higher education? And why is that important?

When Harvard College opened its doors in 1636, its students, professors, and administrators were primarily white, wealthy, and male. Over time, the demographics of U.S. campus communities began to shift, driven in part by federal policies such as the Morrill Act, which established land grant institutions such as UMaine, and the Higher Education Act, and in part by institutional measures such as affirmative action in admission.

Women have outnumbered men among college students since the mid-1970s, but racial, ethnic, and socioeconomic divisions persist. In 2016, 56.9 percent of U.S. residents enrolled in a post-secondary degree-granting program were white, according to the National Center for Educational Statistics. Trailing that were black students (13.7 percent), Hispanic students (18.2 percent), Asian/Pacific Islander students (6.9 percent) and American Indian/Alaska native students (.8 percent). And according to Forbes, in 2019, income inequality in the United States is at its highest level since the Great Depression.

“Diversity work encompasses three areas: compositional — basically who’s represented and who’s not; interactional — ensuring there are intentional opportunities to engage across difference on campus; and structural — an institution has to be willing to take a real intense look at itself and the systems that it operates within,” Delalue explains.

“Coupled with that is equity work. The equity piece is recognizing that the playing field was not designed with fairness in mind and we must continuously work to address that imbalance. When you bring people from different backgrounds together, problems can occur so you must be willing to hold people accountable for the values set forth by our institutions.”

At Brown, this means deeply examining the institution’s historical relationship with slavery. It means building community and mentorship opportunities to support new faculty hires from underrepresented groups. It means exploring the ways in which the institution interacts with the broader community of Providence, RI. It means empowering individual campus units to create diversity plans unique to the work they do. For Delalue, it also means understanding that this framework and these challenges aren’t unique to Ivy League institutions or other elite private colleges. During a recent visit to UMaine, it became clear to her that limited resources present a different — but no less pressing — kind of burden for public institutions.

“Limited resources can be a real concern, but I wonder how we can get creative and move past that as an impediment,” Delalue says. “Do we understand truly and deeply the value of diversity?

“That’s actual return on investment, and that’s a good thing. How do we incorporate this mode of thinking when we’re creating budgets? If diversity initiatives are seen as extra, we’ll never have the money. But if they’re seen as essential and central to fulfilling the mission of the institution, as long as the university doors are open we should have the resources to do this work.”

“Shontay has leveraged her experience in international education and intercultural understanding to promote a leadership style that advances innovation and embraces collaboration in diversity and inclusion and internationalization,” says Shannon Marquez, dean of global education at Columbia University. “In doing so, she has emerged as a successful leader who inspires, motivates, and enlists people to embrace a shared vision to get extraordinary things done.”

In the late 1990s, Delalue was one of a handful of students of color at UMaine, and while she has stayed connected, many of her peers have not. The university has made strides in terms of compositional diversity and Delalue hopes the university will find opportunities to re-engage diverse alumni — in every definition of the word — with current students and faculty.

If anyone can help make that happen, it’s Delalue.

“Shontay was the spark that lit the flame here,” says Robert Dana ’80, UMaine’s vice president for student life. He worked closely with Delalue when she was a student and continues to engage her as a consultant and adviser.

“She instilled in me the urgency of change,” Dana says. “She was always thinking about the future — what the future could be and what a modern university could be like, how promising it could be. Because of what she started, thousands of other UMaine students have and will be positively affected for their lifetimes.” 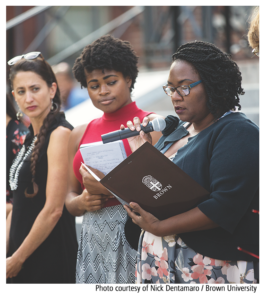 Best UMaine memory:  Joining peers, including members of the UMaine football team, to hold a successful protest with the goal of improving the experience of students of color on campus

Fun UMaine fact: She lived on the same floor as Steve Kariya and other hockey players yet only went to one hockey game during her time at UMaine

Core belief: The power of narrative