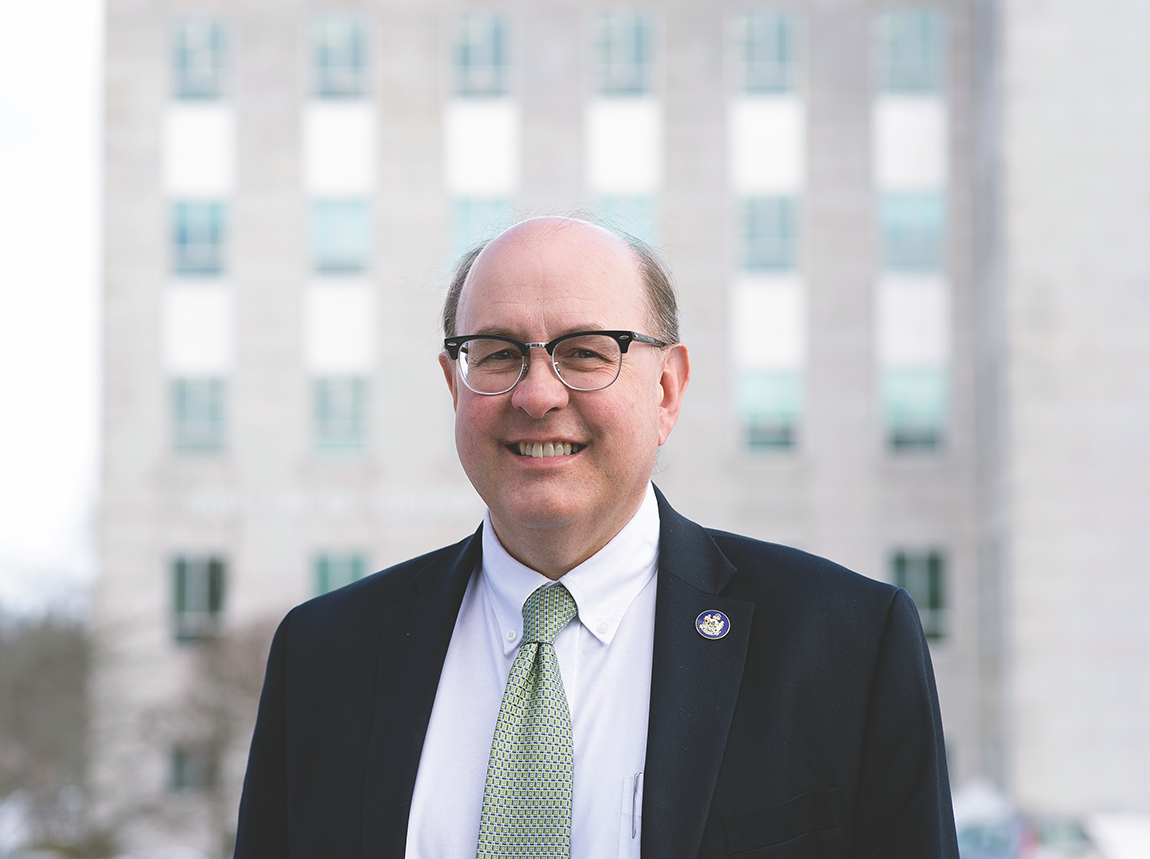 ONE DAY as then-Attorney General Janet T. Mills was struggling to take care of her family, household, and official duties during her late husband’s illness, she received an unannounced visitor: Secretary of State Matt Dunlap ’87, ’94G, who was in Farmington to give a speech.

“He came in, changed into some work clothes, and went out and cleaned my gutters, raked the leaves, checked the storm windows, and swept the driveway — doing so many of the chores to get the house ready for winter that I just wasn’t able to do,” said Mills, who in January assumed office as Maine’s 75th Governor. “Then he changed back into a suit and went off to give his speech, which I’m sure was eloquent.”

Maine has elected 48 Secretaries of State, three of whom, like Dunlap, were alumni of the University of Maine. Now in his seventh term, Dunlap has emerged as Maine’s second longest-serving Secretary of State and a national leader.

ORIGINALLY ELECTED in 2005 — Maine Constitutional Officers are elected to two-year stints by a majority vote of the Legislature – Dunlap served three terms, bookending a solo tenure served by Republican Charles E. Summers from 2011–2012, and then again from 2013 to the present. He is the first to serve non-consecutive terms since the 1880s.

His path to this accomplishment was about as straight as the ragged Maine coastline in his native Bar Harbor.

The son of farmers and artists, Dunlap had the traditional youngster’s oscillating ambitions: school bus driver or Spiderman? After being introduced to a noted conservationist, he set his sights on becoming a fur trapper once he graduated from high school.

“My mother had something to say about that — she declared that I could live in a cabin in a swamp if I wanted to, but that it would be a good idea to have an option,” Dunlap said.  “So instead of living in a cabin, I went to the University of Maine and got two degrees.”

As he worked to find his calling, Dunlap took on enough jobs to qualify as a Maine Renaissance man: fur trapper, bartender, server, cook, dishwasher, columnist, proofreader, textile worker, editor, student-athlete. “My parents believed in hard work, although it was a hard sell for me,” he said. “I liked watching television and reading, but they’d get me to help out on the farm and with the pottery.”

“I knew I wanted to run, but I also knew that Division I athletics was out of my league,” he said. The summer after graduation, knowing he was heading to the University of Maine, Dunlap increased his training regimen in hopes of joining the ranks of collegiate runners.

In Orono, Dunlap literally hit his stride, balancing the grueling demands of a student-athlete.

“I really found a home at UMaine,” he said.

“I would spend my day in classes, and then after track practice we would go for dinner at Wells [Commons], and then walk back to the Pit and cheer on the basketball team, and then make our way to Fogler Library to study for the night. It was just a great student experience.”

His hard work paid off and Dunlap became a top runner on the cross-country team — until he suffered a partial tear of his Achilles tendon during a meet in Vermont.

“Having a career-ending injury was very, very difficult to absorb and understand,” Dunlap said. “It took me a while to realize that the world doesn’t feel sorry for you when you have a setback, and that if you’re going to move on, you have to pick yourself up.”

It was a letter from the Dean’s office informing Dunlap that he had been dismissed for academic non-performance that served as his wake-up call. After meeting with Dean Elaine Gershman — “who knew a shipwreck when she saw one,” Dunlap quipped — he finished his remaining credits and graduated in the fall of 1987.

Never, during any of this, did he seriously consider a life in politics.

“It all seemed shrill and self-serving, and to me, it didn’t have a ton of relevance until I was in college,” he said. “And that’s when I started paying attention.”

He certainly did not have his sights set on becoming Maine’s Secretary of State at that point. His journey to that position began one night at Pat’s Pizza in Orono.

AS DUNLAP WORKED the bar at Pat’s Pizza one night, a friend, State Sen. John O’Dea ’91 of Orono, showed up with Maine’s then-Attorney General Andrew Ketterer.

“John’s been talking you up in Augusta,” Ketterer said. “You sound like you would make a tremendous legislator. Think you might run?”

“Yeah, sure!” he replied. “It kind of fell out of my mouth without my thinking, probably because I needed to wrap up the introduction and get back to work.”

In November 1996, Matt Dunlap was elected to the Maine House of Representatives as a Democrat from Old Town. He served four consecutive two-year terms. (His wife, Michelle Dunphy ’89, ’96, now holds that same House seat.) As a legislator, Dunlap served as the House Chair of the Joint Standing Committee on Inland Fisheries and Wildlife, as the Democratic Chair of the 2002 Legislative Apportionment Commission, on the House Standing Committee on Elections, and as the House Chair of the Citizens Advisory Commission to Secure the Future of Maine’s Wildlife and Fish.

In 2012, as he approached the end of his fourth term in the Maine House, Dunlap chose to seek the Democratic Party’s nomination for the U.S. Senate seat being vacated by Sen. Olympia J. Snowe ’69. Dunlap finished a close second in a four-way June primary election. (The seat was won in November by current Sen. Angus S. King.)

Having lost the primary, Dunlap soon launched a campaign to become Maine’s next Secretary of State. The electorate in that election would be the 186 members of the Maine State Legislature, many of whom had served with Dunlap during his eight years in the House. In December they elected him to the post. 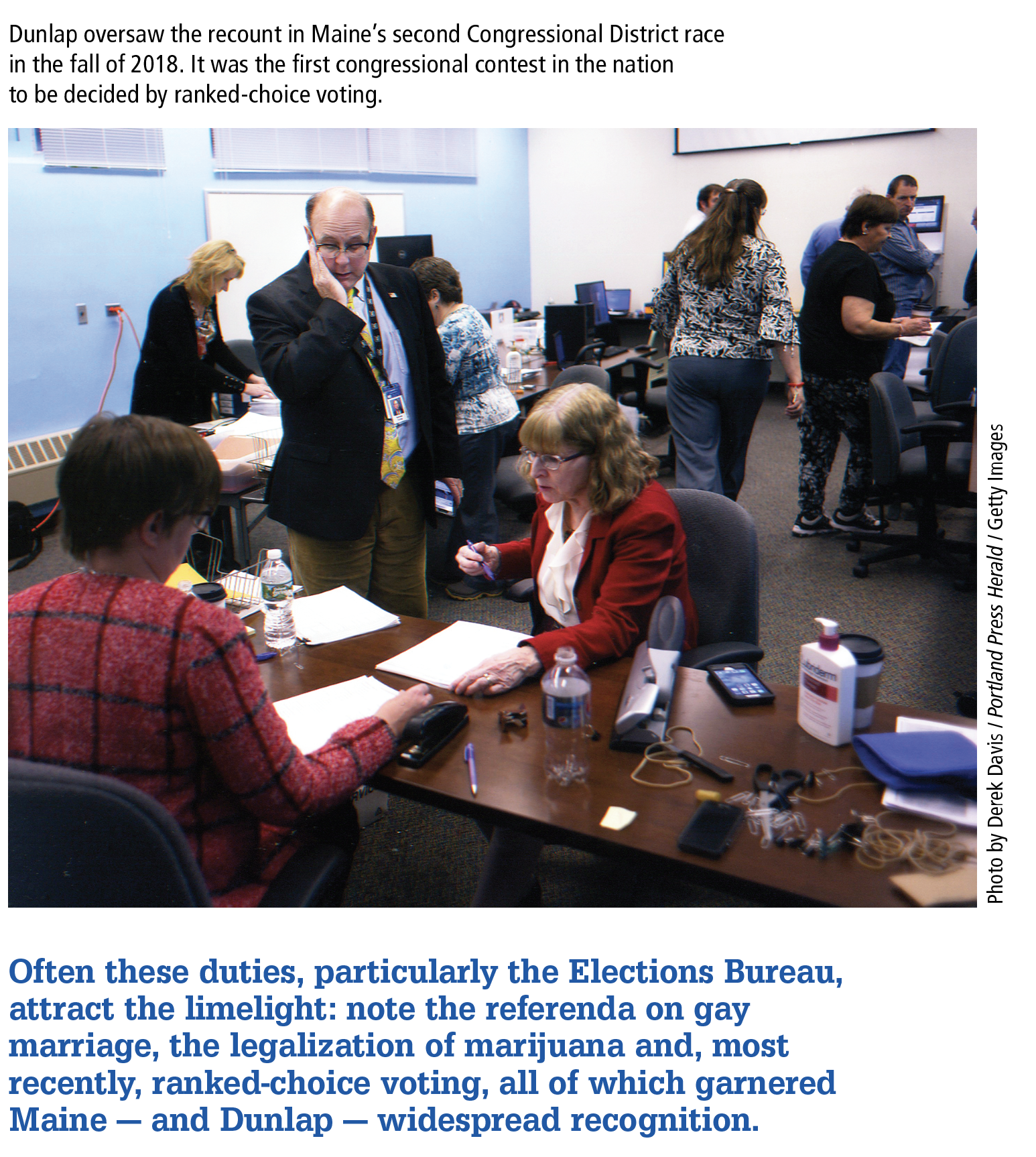 AS MAINE’S Secretary of State, Dunlap is responsible for a wide range of administrative services and duties related to government operations. Best known are oversight of Maine’s elections and its Bureau of Motor Vehicles. But his portfolio also includes management of Maine’s state archives and corporate registrations. Often these duties, particularly those involving state elections and ballot referenda, attract the limelight. Examples that have occurred under Dunlap’s watch include state referenda on gay marriage, the legalization of marijuana and, most recently, ranked-choice voting, all of which garnered Maine — and Dunlap — widespread recognition. So did his election and service as President of the National Association of Secretaries of State.

But it was his appointment in 2017 to the Presidential Advisory Commission on Election Integrity that made Dunlap’s a recognizable name in the national media. Established by President Donald J. Trump, the commission was charged with investigating claims that 3-5 million people had fraudulently voted during the 2016 election. Dunlap was one of four sitting Secretaries of State appointed to the 12-person panel.

Dunlap, along with most state elections officials, said he was unaware of any evidence of voter fraud. Nonetheless, he accepted appointment to the commission believing he could contribute to the investigation. During the commission’s second (and final, as it would turn out) meeting, Dunlap objected when the commission’s vice chair, the Kansas Secretary of State, portrayed specific voting activity by college students in New Hampshire as fraudulent. Dunlap cited election law specifics that debunked the assertion. He won the argument but payback soon followed: The commission’s leaders refused to give Dunlap and his supporters on the commission access to the panel’s working documents and scheduling information.

Following several months and considerable public criticism, thanks to the federal judge’s ruling, the material was finally turned over to Dunlap and other members who had been denied access. After reviewing more than 8,000 pages, Dunlap issued his own report declaring that he found no substantive evidence of voter fraud. No evidence contradicting Dunlap’s conclusion has since been presented, though assertions still abound.

Dunlap, a naturally cheerful fellow, is allergic to boastful expressions, according to 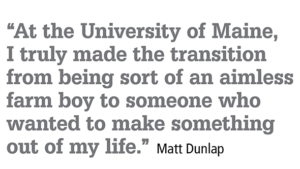 friends and acquaintances across the political spectrum.

“While Matt and I have differing views on politics, his approach to public service is a great example to others,” said retired Maine Senate President Mike Thibodeau (R-Winterport). “He has always been kind, considerate, and looking for solutions. Matt is always ready to attack the issues, but never the person.”

U.S. Senator Angus King, an Inde­pendent, agrees:“The three words that come to mind as I think of Matt are humble, honest, and homegrown,” King said. “I admire him and all that he continues to accomplish for the state of Maine. And besides, he has an inexhaustible supply of great Maine stories, which he’s always willing to share.”

For Dunlap, it all circles back to Orono and his life experiences.

“At the University of Maine, I truly made the transition from being sort of an aimless farm boy to someone who wanted to make something out of my life,” he said. “I would not have predicted where I wound up, but in its own way it makes sense.”

Dunlap is precluded by Maine’s Constitution to seek a fourth consecutive term as Maine’s Secretary of State. As his tenure nears its natural conclusion at the end of 2020, Dunlap was asked who possessed his dream job. His reply was succinct, immediate, and wry.

“The president of the University of Maine.”