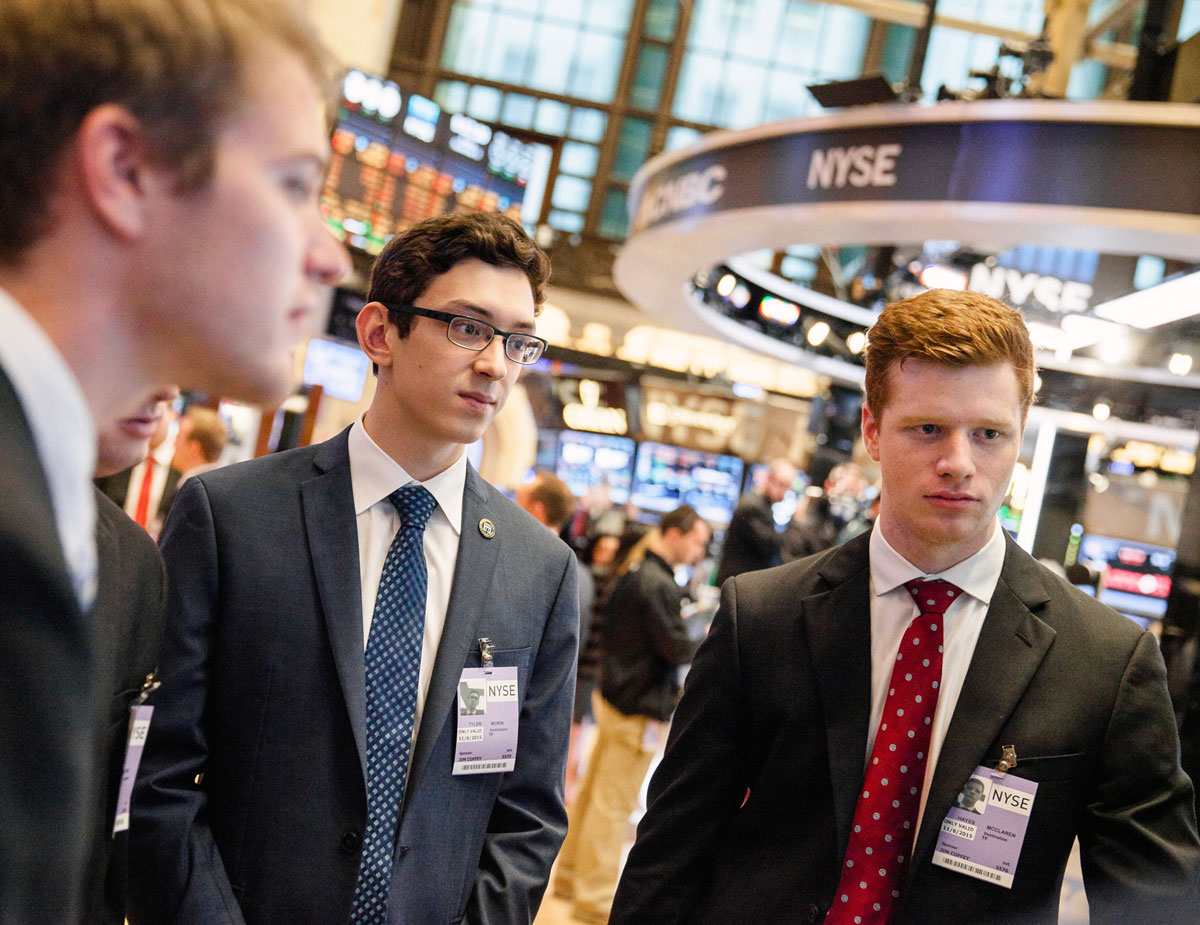 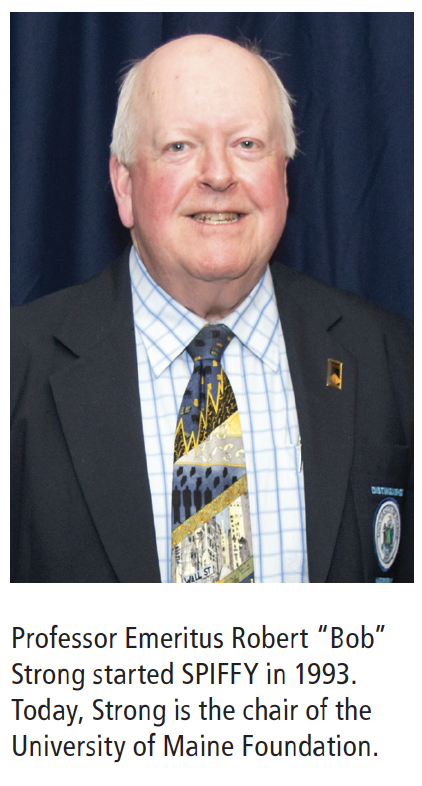 IN 1993, Dr. Robert A. Strong approached the University of Maine Foundation with an idea.

Strong, at the time a UMaine professor of investment education, wanted to create a hands-on, real-life learning experience for undergraduates that would help them learn more about investment management. He asked the Foundation to provide $100,000 in seed money to create a student-run portfolio of stocks, bonds, and other funds. Strong would advise the club but its members would make the investment decisions.

The Foundation’s then-president and CEO, Amos Orcutt ’64, liked the idea so much that he and the Foundation’s board of directors approved doubling the amount requested to $200,000, initiating the launch of the Student Portfolio Investment Fund, nicknamed SPIFFY.

Since then, SPIFFY’s economic and educational return on investment has proved to be as positive as its most optimistic supporters could have hoped. Today the student-led undergraduate club’s management portfolio is valued at $3.2 million. But in many ways, SPIFFY’s greatest asset has been the educational experience and career opportunities that hundreds of UMaine students have realized.

“This whole idea was really unusual,” said Dr. Jeffery N. Mills ’82, Orcutt’s successor as the Foundation’s president and CEO. “A lot of times when student investment groups do investments they don’t actually give them real money.”

Not so at UMaine. The money is real and so are the returns. Since 2003 the SPIFFY portfolio has averaged a seven percent annual rate of return. The group’s fall 2020 mid-semester report shows that SPIFFY has outperformed its benchmark for the last six months.

Any UMaine undergraduate, regardless of academic major, may join SPIFFY. Students fill the roles of president, board directors, and sector heads with responsibility for areas of investment such as information technology, consumer discretionary, or health care.

SPIFFY’S CURRENT academic advisor, Professor Sebastian Lobe, describes the organization’s operation as “a very democratic process.” He said his own role is minimal.

“If I see something that really strikes me, say I really have a very strong opinion about a specific trade — then I will voice it. But they still are allowed to [make the decision].”

A highlight of the SPIFFY experience is the opportunity to attend the three-day Global Asset Management Education (GAME) Forum, the largest student-run financial conference in the world. Held annually in New York City, GAME Forum provides high-value learning and networking experiences: the 2019 GAME forum featured 148 speakers from the finance industry and academia, attracted students from 158 universities and colleges, and drew representatives of 115 corporations and organizations.

Many of the GAME Forum participants enter its annual Global Portfolio Competition, a highly regarded international contest which SPIFFY impressively won in 2018.

Abby Bennett ’18, who was SPIFFY’s co-president that year, recognizes SPIFFY’s value to its participants.

“The most important thing is not the [financial] return we get,” Bennett explained. “It’s the experience and opportunity we provide for [our] members.”

In fact, the connections Bennett made through SPIFFY helped land her a position immediately after graduation with Massachusetts-based Cambridge Investments, where she worked as an investment analyst. She’s now a commercial credit analyst for Gorham Savings Bank.

George Pullen ’03 says that participating in SPIFFY changed the course of his life. One day, as he walked through Donald P. Corbett Business Building, he spotted a flyer for the club and decided to attend a meeting. He was so impressed that his pursuit of his political science degree featured a heavy dose of courses in finance and economics.

That combination of coursework and SPIFFY experience has served Pullen well. Currently he works in Washington, D.C., as a senior economist for Commodity Futures Trading Commission, an independent government agency that regulates the U.S. derivatives market. He also serves as chief space economist for the online media platform Space Channel, where he co-hosts a show dedicated to space-related investments.

Bob Strong asked the University of Maine Foundation board to entrust SPIFFY with $100,000 to invest as its members saw fit. The board of directors liked the idea so much that they increased the fund to $200,000.

Pullen believes his SPIFFY experience gave him added professional credibility and a competitive advantage in the workplace. Whereas many of his peers hadn’t made their first investment decisions or pitches prior to being hired, “I had done it for three years already in college.”

Another SPIFFY alumnus, Zackery McGuire ’05, initially planned to major in political science at UMaine. When world events during his undergraduate years sparked McGuire’s interest in business and investing, he soon found his way into a SPIFFY meeting. 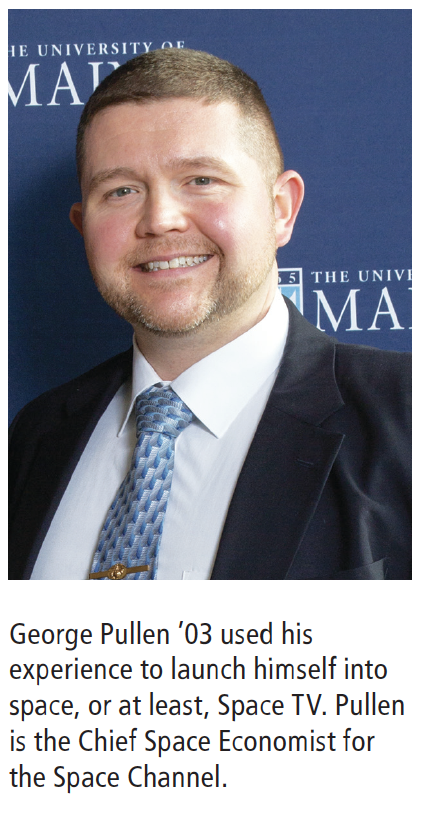 “Ultimately, I became deeply curious about investment management, through the experience of SPIFFY and coursework that I was taking with Dr. Bob Strong and then Dr. Richard Borgman,” McGuire said.

That curiosity redirected McGuire to a different career path. Today he is the director of investments at the University of Georgia Foundation, which holds more than $1.4 billion in assets and whose investments generate roughly $75 million in annual support for that university’s students and operation. McGuire is especially proud that his work generates financial assistance for students; he had to work while enrolled at UMaine in order to support himself.

“I think subconsciously, that [necessity] shaped some of my career goals, because of the attraction of working in higher education and providing scholarships,” McGuire said. “I thought it was really cool to give students these opportunities so they could focus on their coursework and academics.”

In addition to gaining experience in finance and investing, SPIFFY participants develop critical “soft skills” such as interpersonal communication, teamwork, time management, and leadership and problem-solving.

“It’s the soft skills that really, as you progress in your career, become much more imperative,” McGuire said. “The hard skills become more commoditized. But to advance in your career, you have to be proficient in things like public speaking, delivering a presentation, [and] how to pitch an idea. All of that happens at SPIFFY.”

SPIFFY continues to attract new members and make investment decisions, though its meetings are conducted via Zoom in light of COVID-19 safety precautions. Members are planning to participate in the 2021 GAME Forum, which will be conducted in March as a virtual event due to the pandemic. M