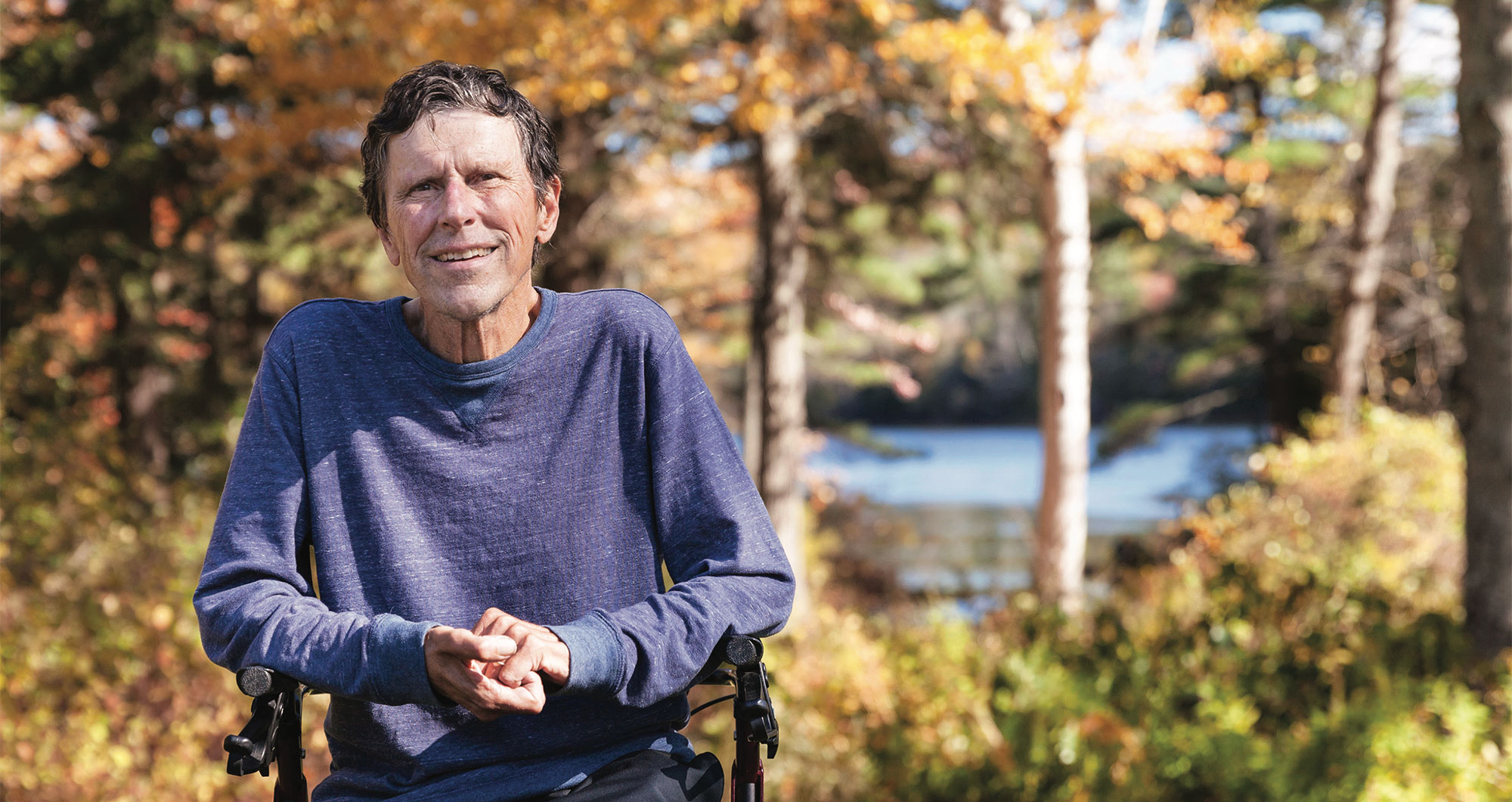 IN THE HALF CENTURY since George Smith ’70 graduated from the University of Maine with a degree in business administration, his life and career have experienced more surprise turns than any of the state’s rivers and streams that have come to frame his legacy.

Seemingly destined for a career at his father’s general store in Winthrop, Smith’s interest in politics was ignited by a high school trip to Washington, where he and others spent two hours with legendary U.S. Sen. Margaret Chase Smith, with whom he shared a name but not a bloodline. “She inspired me so much that when I got back to Winthrop High School, I started a Young Republicans Club,” Smith said.

After graduating from UMaine in 1970, Smith joined the upstart 1972 Congressional campaign of his former Business Law professor, Bill Cohen, who would go on to win that race and serve a long career in the U.S. House of Representatives, U.S. Senate, and as Secretary of Defense. “The most memorable part of the campaign was Bill’s 600-mile walk from the New Hampshire border to Fort Kent,” Smith recalled. “My VW bus was in front of Bill with a sign saying, ‘Bill Cohen ahead: Honk and Wave.’”

Two years later, Smith managed fellow Republican Dave Emery’s campaign for the U.S. House, when the candidate defeated Democratic incumbent Congressman Peter Kyros. “Dave and I arrived in Washington, D.C., two 26-year-old Republicans, without much of an idea of what we were doing,” Smith said.

While George Smith might not be as well-known as the political giants who inspired him — Smith, Cohen, and Democrat Ed Muskie – his fiery devotion to conservation policy could arguably make him the Teddy Roosevelt of Maine. Smith’s influence, enjoyed by untold numbers of outdoors enthusiasts who might have no idea who he is, resulted in his selection as the University of Maine’s 2020 Alumni Career Award.

“As a writer, lobbyist, blogger, and television show host, George has thousands of followers and admirers who have long appreciated his humor, candor, and insight,” Maine Gov. Janet T. Mills wrote in her nomination letter.

AS WITH MANY Mainers, Smith’s story begins outdoors; in this case, in Winthrop, which painted a warm Rockwellian existence with locally owned stores, a bowling alley, and a movie theater. “As a kid, I spent lots of time in the woods, often fishing a remote brook and bringing home enough brook trout to feed my family dinner,” he said. 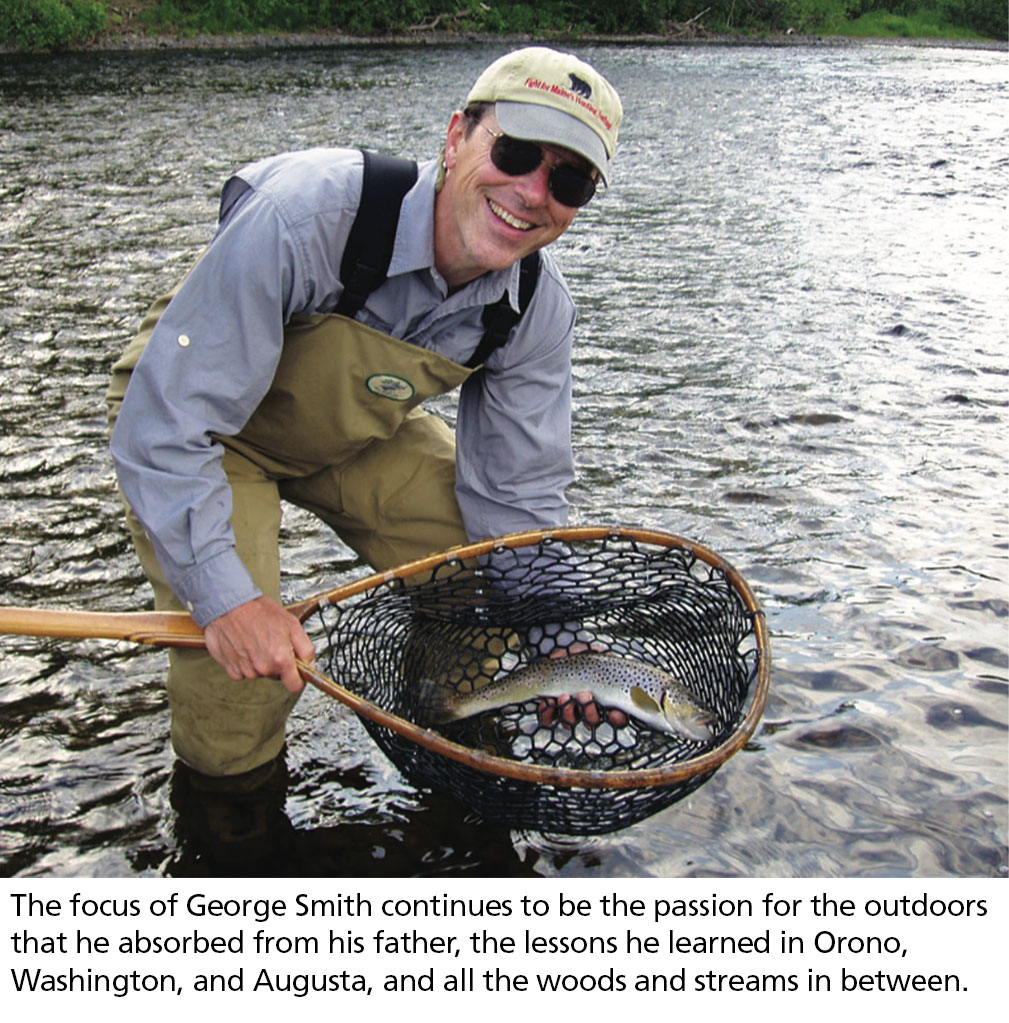 His story since has arced, and continues to grow, as perhaps the most prominent conservationist in Maine since Gov. Percival Baxter.

After his years on Capitol Hill working for Emery, Smith returned to Maine as a consultant and was eventually offered an opportunity to write a newspaper column, much as his father, Ezra, had a generation before. Decidedly right-leaning, the column, The Native Conservative, raised Smith’s profile enough to get him the job as the executive director of the fledgling Sportsman’s Alliance of Maine (SAM).

Upon assuming the organization’s reigns, Smith asked his old friend, Democrat Paul Jacques, for advice. The answer: stop being so partisan. Not all Democrats are opposed to hunting and guns. “People started trusting him,” Jacques recalled. Under Smith’s leadership over the course of 18 years, membership ballooned from 2,000 to 14,000, and his influence in Augusta continued to deepen.

Whether writing a column or a book, hosting a cable television show, being interviewed, or testifying before the Maine Legislature, Smith effortlessly blended policy, politics and muddy-road yarns to illustrate a point, often with a backdrop of L.L. Bean-clad sportsmen. Lisa Pohlmann, CEO of the Natural Resources Council of Maine, explained why Smith was, and remains, an influential figure.

“George is an excellent writer who has captured the attention of rural Mainers and sportsmen and women with his folksy, personal columns… and other forums,” she said.  “His is a trusted voice and helps to educate people about important environmental issues in current times.”

Former Maine Governor and current U.S. Senator Angus King knew of Smith and his family long before he ever met him. They finally connected in person during King’s 1994 successful campaign for the Blaine House, where Smith advised the independent candidate on conservation issues. “And then, of course, for eight years he lobbied the crap out of me,” said King.

Like others who have known Smith over the course of a couple decades, Jacques noted a distinctive… moderation of Smith’s views, something Smith himself has acknowledged. “He’s had an epiphany in the last few years,” Jacques said.

Said Pohlmann, who had worked with Smith’s daughter, Rebekah, before she ever met Smith: “By the time I knew they were related, George was retired and had softened his previously conservative viewsand was increasingly progressive about issues involving low-income people, the environment, and the role of government in protecting both.” 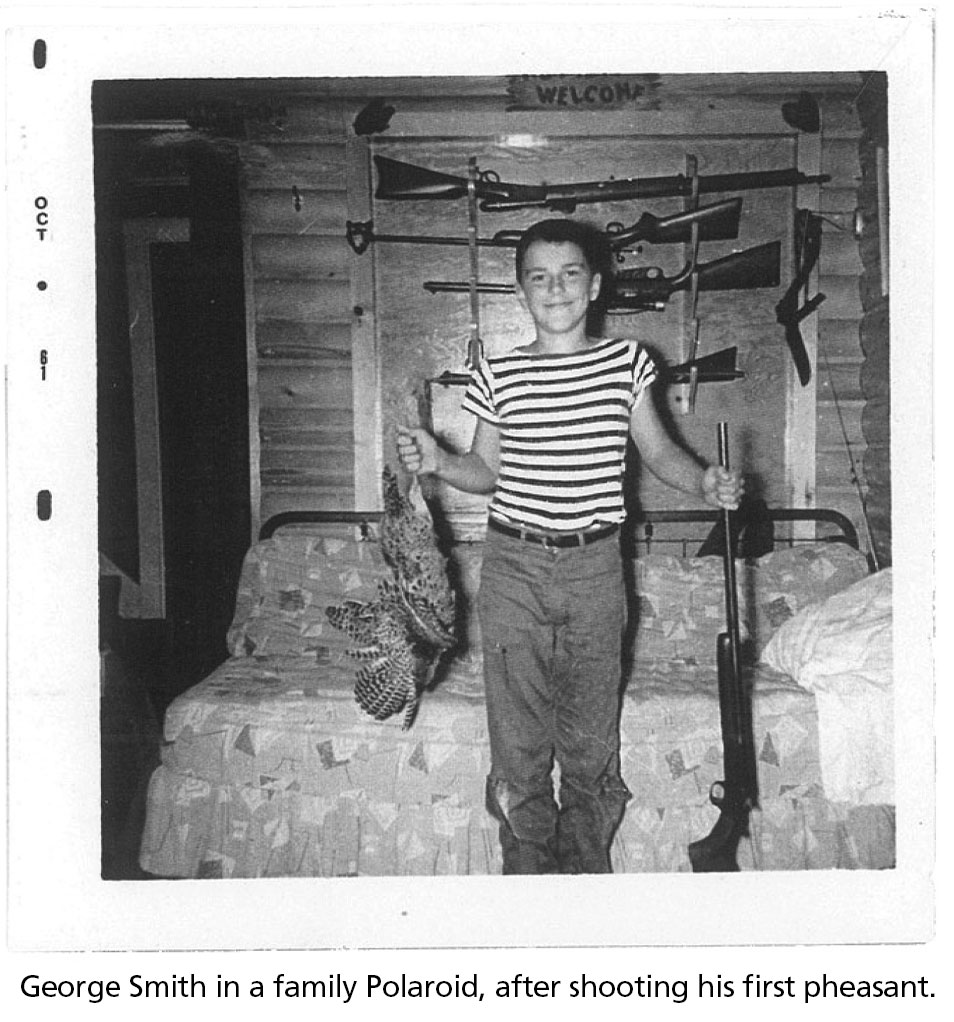 FOR SMITH IT IS, perhaps, now less about political persuasion and more about a common fight to protect Maine land for recreational use. In a recent column, Smith strongly rebuffed Republican President Donald Trump’s elimination of “almost 100 environmental rules and regulations,” describing the actions as “a real disaster.” If Smith’s views have expanded, his immediate world has, in reality, contracted, at least in a physical sense.

Diagnosed with Amyotrophic Lateral Sclerosis (ALS, or Lou Gehrig’s disease) in 2017, Smith is no longer able to enjoy the outdoors which he protected for so many generations of Mainers. However, this diagnosis hasn’t changed Smith at his core.

He begins his day with his beloved wife, Linda Hillier Smith ’75, as they drink coffee and watch the birds at their home in Mount Vernon. Then he works for several hours in his home office, wood paneled and decorated with stuffed mementoes of a lifetime in the woods. The disease, which now has Smith using a wheelchair, is progressively invasive on his ability to simply type his columns and emails.

But it has not silenced his voice.

“ALS has not changed my views, but I can no longer hunt and fish,” he said. “Some friends think I must be very disappointed, but I’ve had an amazing life of hunting and fishing adventures, so I can’t be disappointed now.”

But if ALS has not changed Smith’s views it has, for some, helped to secure his legacy of character and strength. “The way he has confronted this disease is so characteristic of who he is,” King said.

Echoed Smith’s sister, Edie, a Senator King staffer: “We’ve never once heard him complain or feel sorry for himself or just plain act mad at the world. He makes the most of every day and has inspired everyone who knows him.”

In interviews for this profile with subjects who reside across the political spectrum, there is one consistent theme: Smith is a public servant who is smart, eloquent with a rurally grounded voice, effective, stubborn, capable of immense personal growth, and – perhaps most importantly – deeply grounded in a foundation of strength and humility while under attack from a debilitating disease.

For Smith, his focus continues to be the passion for the outdoors that he absorbed from his father, the lessons he learned in Orono, Washington, and Augusta, and all the woods and streams in between.

“Mainers really value our state, from its wildlife to its forest to its coastlines,” he said. “I am very proud of all we’ve done to protect and preserve the things we love about our state, and I am sure that will continue.”

And, said his sister, Smith continues to be driven by his quiet, but potent, faith.

“One thing people often don’t realize about George is how strong his faith is,” Edie Smith said. “All three of us grew up in the Winthrop Methodist Church, where our Mom was the organist and choir director. His faith in God is strong and while he doesn’t wear his religion on his sleeve, he lives his life as a devoted Christian — like our Mom did.”