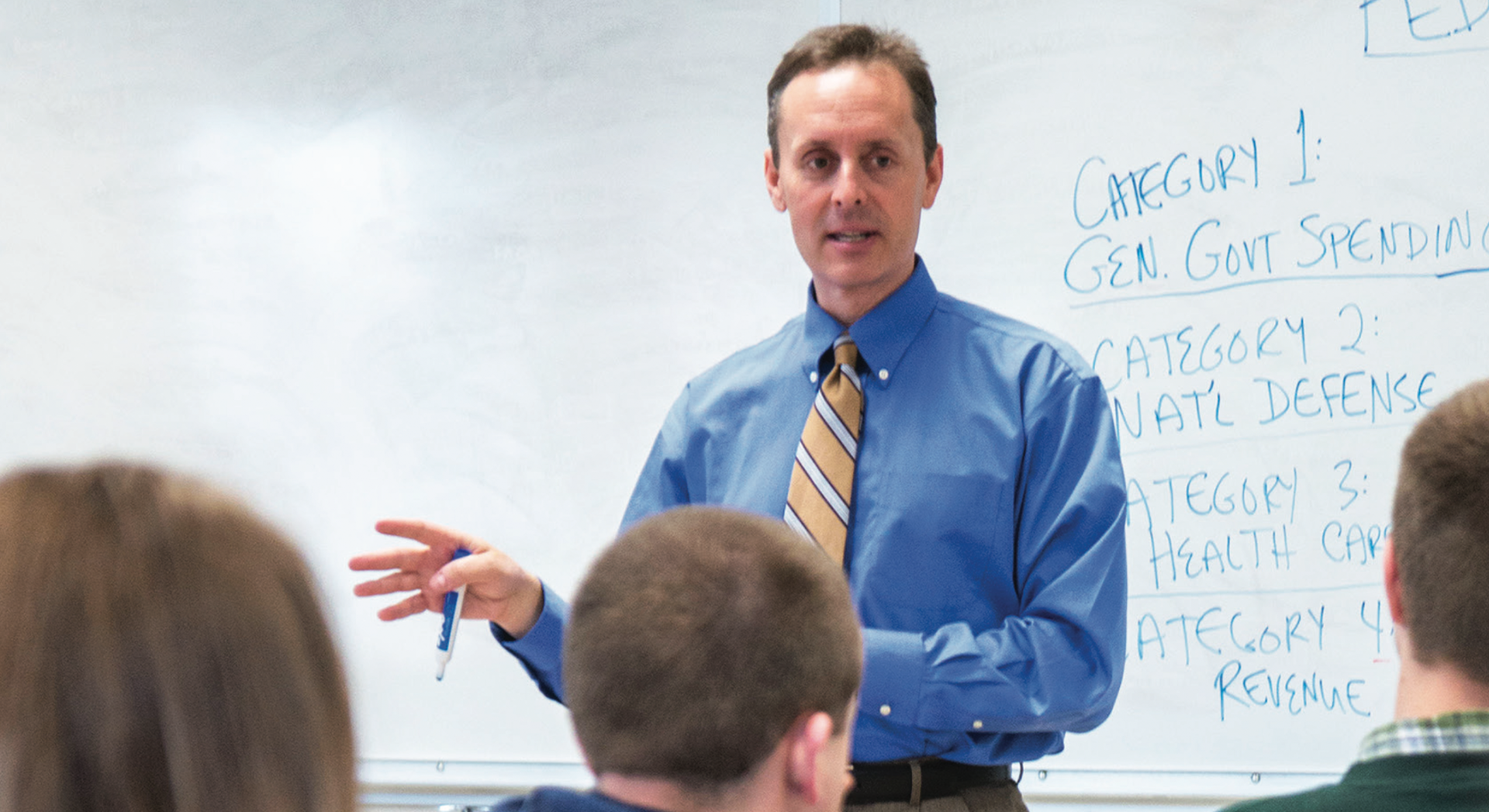 RICHARD J. POWELL, a member of the University of Maine’s political science faculty for nearly two decades, has been selected as the 2020 Distinguished Maine Professor, the university’s most prestigious faculty award.

Powell was chosen from among six finalists by a review panel representing alumni, current and retired faculty, and the UMaine student body. He was initially nominated by Emily Haddad, dean of UMaine’s College of Liberal Arts and Sciences, along with colleagues, students, and supporters from the campus community.

The Distinguished Maine Professor Award each year honors a UMaine professor who exemplifies the highest qualities of teaching, research, and public service — in that order. The award was established in 1963 by the UMaine Class of 1942, which also created an endowment fund that provides a $4,200 cash prize to the annual winner. In recent years the Class of 2002 has taken over responsibility for helping build the endowment. The Alumni Association administers the nomination and selection process and provides additional financial support to augment the endowment.

An Exemplar of UMaine’s Land-grant Mission
Powell earned master’s and doctoral degrees from Northwestern University in Chicago after receiving his bachelor’s degree from Connecticut College.

Appointed to the political science faculty in 2001, Powell quickly immersed himself in the university’s teaching, research, and public service missions. Along with teaching undergraduate and graduate courses in government, politics, and leadership, Powell has authored or co-authored four books and more than two dozen scholarly journal articles and publications.

He also taught at other colleges and universities as a visiting scholar. In 2010, he taught graduate-level courses on American government and politics as a Fulbright Fellow at Zhejiang University, one of China’s most highly regarded academic institutions. Temporarily leaving their easy-to-navigate neighborhood of single-family homes in Bangor for this prestigious appointment in China, Powell, his wife Angela ’05G, and their three children lived in a three-bedroom apartment in Hangzhou, a city of eight million residents located south of Shanghai. (They now live in Holden, a small town located a casual 30-minute drive from Orono.)

His record as a teacher, scholar, and subject matter expert has earned him wide regard on campus and off, according to those who collaborated on his nomination.

“I cannot think of any of my wonderful colleagues — of which there are many — who are more deserving of the Distinguished Maine Professor Award,” wrote Political Science Professor Mark Brewer. “Dr. Powell is an extraordinary teacher, highly dedicated and generous in the provision of public service, and a consummate scholar.”

Peter Madigan ’81, a former participant in the Congressional internship program which now bears his name, said that Powell has been an exceptional steward of the UMaine program. Madigan, a longtime political and policy adviser in Washington who currently chairs the Cohen Institute’s board of advisors, said Powell has “modernized and enhanced” the 60-year-old program, and that it “frankly equals anything I have seen from the top 10 nationally ranked schools.

“Many of our [internship program’s] students are hired on Capitol Hill as a result,” he noted.

“[Powell] is a gifted and powerful teacher who makes a difference in the lives of his students, both in the moment and for the long run,” according to Mary Mahoney-O’Neil ’01, ’04G, ’10 Ph.D., associate dean of academic services for UMaine’s College of Education and Human Development. She relates a story from 2014, when Powell asked her to team-teach an interdisciplinary course called “Foundations of Leadership.”

“I knew this was an opportunity that I could not pass up,” Mahoney-O’Neil said. “Dr. Powell’s reputation as an expert in the area of the United States Presidency and U.S. politics was well known to me, and I was intrigued by the passion he shared with me about bringing this idea and practice of leadership to our undergraduate students.

“We began that first semester with 17 students,” she added. “We now have more than 400 students each year engaged in [their leadership courses].” 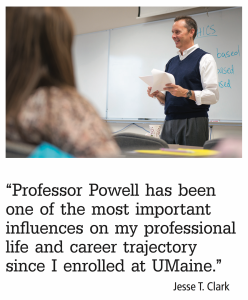 Current and former students speak enthusiastically about Powell’s demeanor as a teacher, his guidance as an advisor, and his passion for his subject matter.

“Professor Powell has been one of the most important influences on my professional life and career trajectory since I enrolled at UMaine [in 2012],” said Jesse T. Clark ’16, currently a Ph.D. candidate at Massachusetts Institute of Technology. “From the very first political science course [to] a book chapter that is currently under contract, Professor Powell has had a profound impact on the person I am today.”

James O’Connor ’16 also expressed gratitude to Powell for stimulating his interest in public policy and for motivating him to become a more dedicated student.

“When I first arrived at the University of Maine in 2012 I was a demoralized, cynical man studying physics [because of ] pressure from others and a lack of any will of my own,” O’Connor confided. “Now I am a graduate student in the Department of Government at the University of Texas … Dr. Powell is in no small part responsible for my transformation.”

“I believe he represents the highest qualities of teaching, research, and public service,” James said, “and represents the best of what a student could hope for in a professor.” M