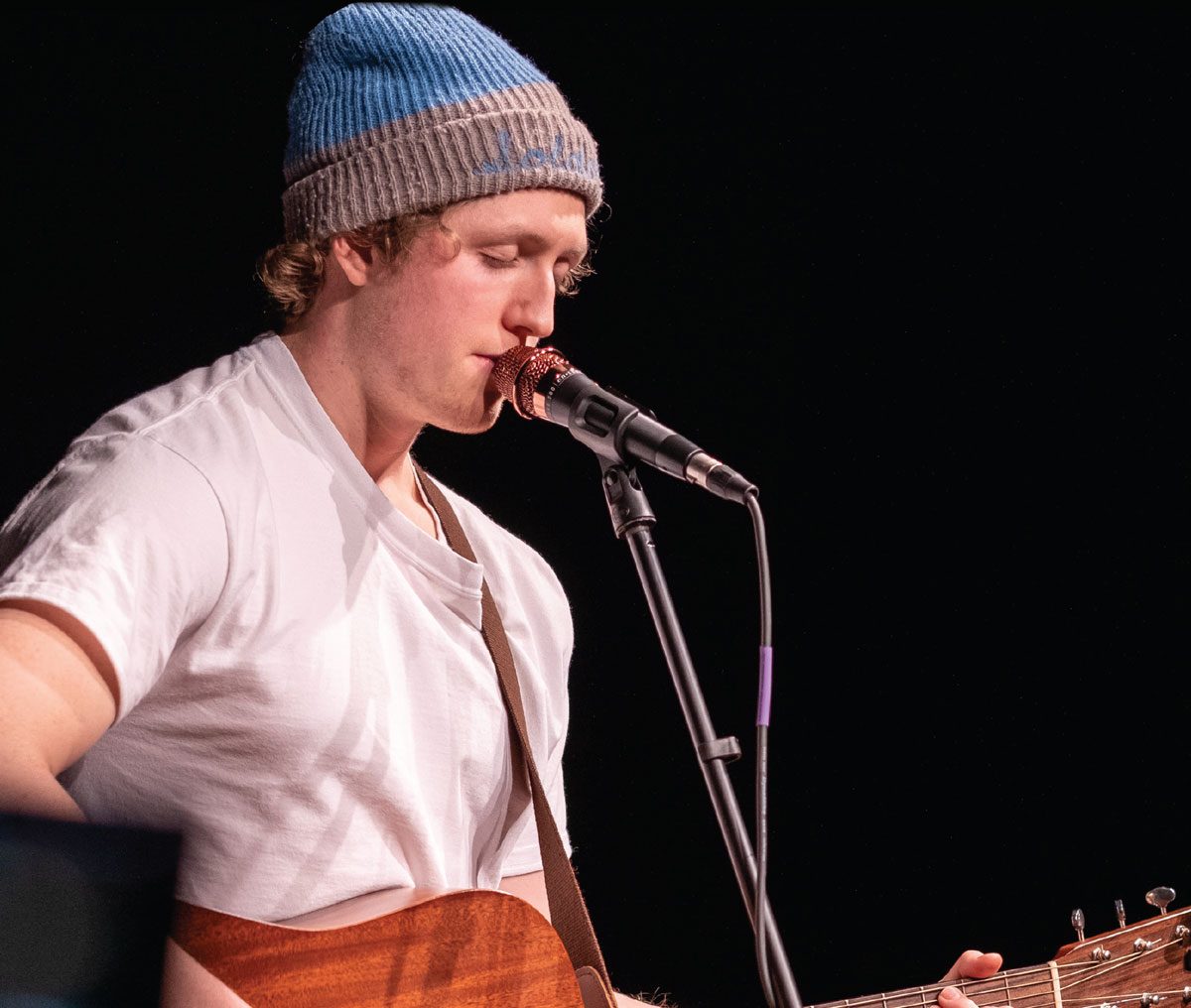 ON THE ICE, Mitch Fossier ’20 is known as a creative playmaker. His 32 assists this past season placed the University of Maine men’s hockey senior in a tie for fourth place in the country in that category.

The Black Bears captain is equally creative off the ice where he is a singer, songwriter, and guitarist.

Fossier has recorded 13 songs based on acoustic guitar that he describes as “folky, indie-based” and has produced an album that he intends to release digitally.

“He is an excellent musician and songwriter. He can play multiple instruments. He can sing, and he’s also an excellent student,” UMaine head coach Red Gendron ’93G said. “Whatever he works at, he has a commitment to excellence.”

Music and hockey provide a nice balance to Fossier’s life. He is passionate about both and said the gratification is different.

“Hockey is all about winning. Music is a little more about me, which is strange,” he added.

The two pursuits complement each other.

After a long day at the rink, Fossier enjoys going home and picking up his guitar. Other times, after recording for several hours, he likes lacing up his skates.

Fossier can also play the piano and dabbles with other instruments. He also is a fan of the violin and cello. He started getting into music when he was 13, although he had a guitar before that.

“There were a couple of musicians in my neighborhood,” said Fossier, who is from Alpharetta, Georgia. “They showed me how to record.”

The soft-spoken Fossier developed a passion for making music and recording and gradually built a recording studio in his house.

“It’s beautiful the way technology is. You can record in your own room,” he said.

Fossier said he was fortunate to be surrounded by talented musicians as he recorded his album at the Innovative Media Research and Commercialization Center on campus.

He has worked closely with Duane Shimmel, who teaches the Art of Recording Audio for UMaine’s departments of Intermedia, New Media, and Music. He is an accomplished trumpet player.

“He is a great instructor,” Fossier said.

He said the existence of a recording studio on campus played a role in his decision to attend UMaine, although hockey was his primary reason.

“I love the Alfond Arena,” said Fossier, who visited the school in 2013 for a game between UMaine and Vermont.

“It was tied 0-0, and when Maine scored with five minutes left to take the lead, the building was so loud,” Fossier said. “It’s a special place.”

“He’s a great man. He showed me how to do the right things the right way, and he treated me well,” he said.

Fossier became interested in hockey through his father, Rick, who played at Yale in 1985 and 1986.

“He loves the sport. He got me into it,” said Fossier, who was productive on the ice as soon as he arrived in Orono.

AFTER POSTING EIGHT goals and eight assists as a freshman, the 6-foot, 188-pound left winger led the Black Bears in scoring for the third straight year.

His 1.24 points per game left him in a seventh-place tie.

Fossier was a second team All-Hockey East selection this past season after being a third-team choice two years ago.

This was Fossier’s second year serving as a captain. He was a member of UMaine’s Male Athletes Against Violence group.

“He is obviously an exceptional player,” Gendron said. “He has also been an exceptional leader and has been outstanding on campus. He is a very tal–ented kid. We’re pretty lucky [to have him].”

Fossier has also provided leadership through his dedication to the game.

“He works his tail off,” sophomore defenseman Simon Butala said. “He’s one of the earliest to get to the rink and one of the last ones off.”

“It’s an honor to follow him onto the ice every game,” junior defenseman Cam Spicer said.

Fossier, a new media major and music minor, plans to give pro hockey a shot after he concludes his UMaine career and pursue a music career further down the road.

“I’d love to play [pro hockey], and if I can find a way to make a living off music after my hockey career is over, I’ll do that for sure,” Fossier said.

“I’m having fun, the team is having success, and my line has been clicking pretty well lately,” Fossier said in early February. “There are a bunch of positives. I love coming to this rink. I know it’s the final stretch, and I won’t be playing here much longer. Alfond is a special place with special people.” 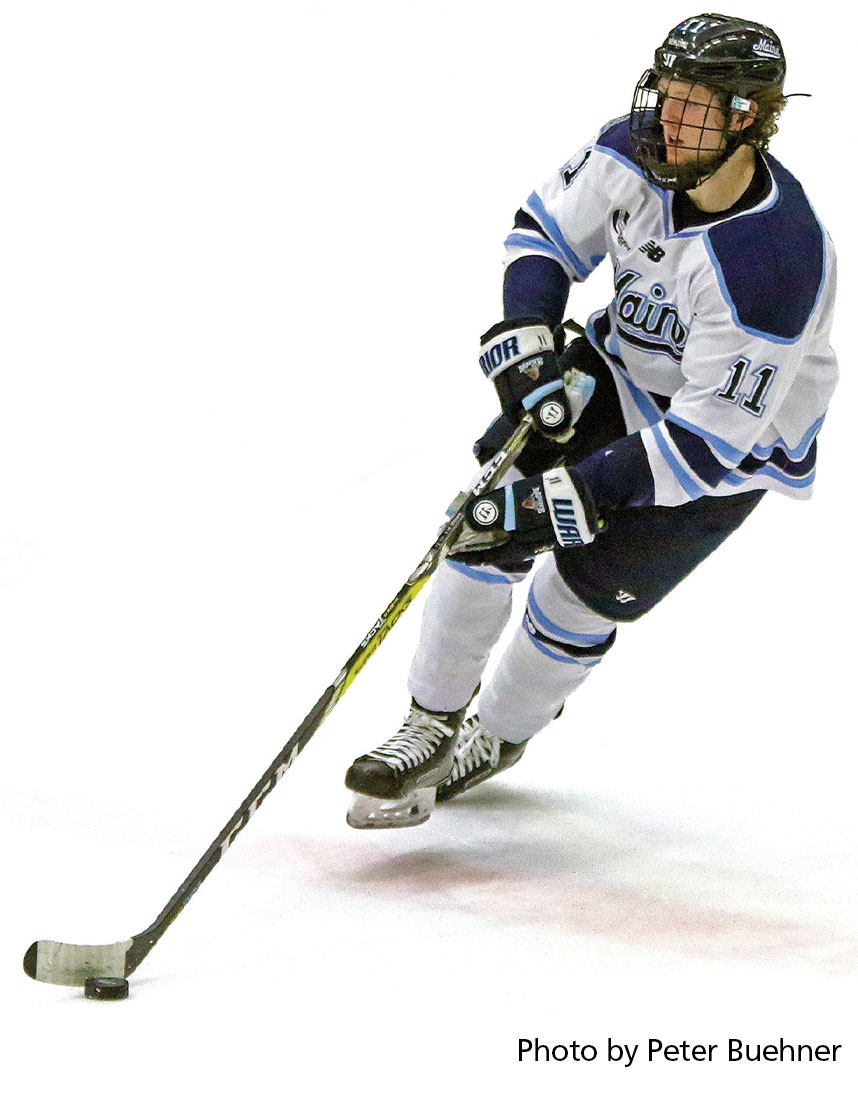 FOSSIER CAPPED HIS career in dra–matic fashion, scoring the game’s only goal with 10:39 left in regulation to supply the Black Bears with a Seniors Night win over Providence College in early March.

He led the Black Bears in scoring for the third straight year.

Fossier collected 128 career points on 38 goals and 90 assists in 134 career games, which ties him with Ray Jacques ’85 for 30th on the school’s all-time scoring list.

Fossier’s hockey career recently rose to the next level: In June he signed a pro contract with the Rockford Icehogs, the top minor league affiliate of the NHL’s Chicago Blackhawks.

An earlier version of this story was published on February 8, 2020 in the Bangor Daily News. Updated and reproduced with permission.