Takes One to Know One

JENNIFER HIGGINS VASHON ’93 is an expert on black bears—the animal kind, not the ones who roam the hallways of UMaine. As a wildlife biologist for Maine’s Department of Inland Fisheries and Wildlife, Vashon is a researcher, public educator, and advisor to policy makers. The University of Maine’s wildlife management program—and the connections she made there helped prepare her for the role.

Vashon was in high school when she picked up the book that would change her life. She doesn’t remember the title, but she remembers the plot: A photographer goes to a bear hunting protest and meets a biologist who helps change her perspective on hunting. The author credited bear biologist Gary Alt as a source of background material.

“That’s when I realized that I could be outside and work with wildlife,” Vashon said. “I knew that I at least wanted to enter the wildlife field.”

At the time, Vashon had an interest in black bears, but hadn’t yet settled on them as her main focus. She would have to become a Black Bear herself before she realized that she wanted to make a career out of studying the mascot’s namesake.

Vashon enrolled in the wildlife program at UMaine in 1989. What she found there was “pretty unique.” The program required undergraduates to have a summer job and several months of work experience in the field prior to graduation.

During her freshman year, membership in the UMaine Wildlife Society gave Vashon the opportunity to help a graduate student with a project. She ended up spending the day in a canoe with Tom Hodgman, a wildlife biologist and UMaine professor.

Hodgman helped connect her with a spotted owl project in Oregon. Two summers on that project gave Vashon a new perspective.

“I realized what I was learning in the classroom had application,” Vashon said. “When you’re in high school you think, ‘Why do I have to learn this? When will I ever use that?’ But here I realized, ‘Oh, the coursework I’m taking is preparing me for this job.’”

The owl project was just the first in a string of jobs Vashon accessed through relationships built at UMaine. A fellow undergraduate student introduced her to Craig McLaughin, who was the Maine bear biologist in charge of the state’s black bear program. Vashon volunteered on the project throughout her junior and senior years, and was hired as seasonal staff after graduating in 1993.

A Legacy of Black Bear Study

The Maine bear research program started in 1975 and continues to this day. Modern technology enables researchers to track between 80 and 100 female black bears from birth until death using radio collars.

When a female goes into the den, researchers track her to see if she gives birth to cubs. If she does, they tag the females and the cycle of research continues.

The experience Vashon gained in Maine led her to work on the Pennsylvania bear project with with Gary Alt, the same biologist who had given his insight to the book that changed Vashon’s life.

As the Pennsylvania project wrapped up, Vashon looked around for her next challenge. Word of a new bear study in Virginia led her to contact a graduate advisor at Virginia Tech.

“I kind of really asserted myself,” Vashon said. “I didn’t just wait for something to happen. I flew down there after I was done in Pennsylvania and really persuaded Mike Vaughan to take me on as a grad student.”

Once enrolled as a graduate student, she couldn’t help but bring a little bit of the UMaine experience to Virginia Tech. She went to Wildlife Society student chapter meetings and encouraged students to get involved in field work, including hers.

After graduate school, Vashon returned to Maine. In 1998, she married fellow biologist and UMaine alumnus Adam Vashon ’93. That same year, the Maine Department of Inland Fisheries and Wildlife started its 12-year lynx telemetry study. Both Vashon and her husband were hired for the project.

They worked together in northern Maine until 2002, when Craig McLaughlin ’98 Ph.D. moved to a new opportunity, leaving Maine in need of a black bear biologist, a role that Vashon was thrilled to tackle. She has served as Maine’s Black Bear Biologist and Lynx Biologist ever since.

Safeguarding the Future for Black Bears

Vashon regularly returns to campus for hockey games and to lend her expertise to the wildlife program as a guest speaker.

Assistant Professor Carly Sponarski invited Jennifer to visit her Wildlife Policy and Administration course in 2017. Soon they were collaborating on a project exploring stakeholder perceptions of black bear hunting in Maine.

“Jennifer is generous with her time,” Sponarski said. “My students enjoy her talk each year and they find it quite interesting to hear what it is like to be a state biologist.”

The students aren’t the only ones who learn from Vashon, “I have learned a lot about the history and current policy of game management in Maine from Jennifer,” Sponarski said. “She is easy to talk with and provides great insight into potential research areas.”

Vashon is the go-to expert on bears for the entire state of Maine. Marc Edwards ’97, park naturalist at Baxter State Park, called Vashon after getting several reports of nuisance bears at two campgrounds over the summer.

“She was extremely helpful in explaining bear behavior and what to look for when encountering a bear,” Edwards said. “She also guided us to other resources and put us in contact with the bear biologist at Great Smoky Mountains National Park. My understanding of bear behavior and how to respond to nuisance bear activity has increased greatly.”

Maine has very few negative interactions between humans and bears (though the bears might disagree). Wildlife play a major economic role in Maine, as spending by wildlife hunters and watchers contributes more than $1 billion per year to the state’s economy.

In order to keep the population in check, hunters should harvest about 5,250 bears per year, according to the Big Game Management report from the Maine Department of Inland Fisheries and Wildlife. Yet yearly harvests have stayed below 3,500 since 2014.

That’s one of the reasons that Vashon advocates for hunting as a conservation tool.

“Most people don’t understand how you can work with a species for your entire career and still accept or embrace that hunting is an important tool,” Vashon said. “But there are folks that are highly trained that are keeping an eye on populations to make sure that both the species is healthy and that they’re in balance with society,” Vashon said.

Vashon grew up opposed to hunting. Her family enjoyed the outdoors, but not hunting. Her perspective shifted while at UMaine as a result of a Wildlife 101 class taught by Professor Mac Hunter ’74. Hunter asked his students to consider big questions: how the tuna fishing industry affected dolphins, or whether hunting should be used as a conservation tool. Students were encouraged to debate each other, taking a view opposite from their own.

“That class convinced me that there are always two sides to every story and it’s your role to investigate that,” Vashon said. “It opened my eyes to the fact that my perceptions are perceptions. I try to have information drive my decisions and that’s something I learned from him.” M 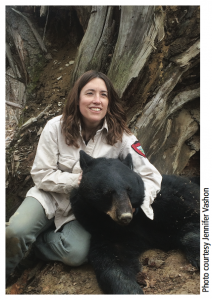 • Maine is home to the largest black bear population in the eastern United States
• 86 percent of the state of Maine is occupied by bears
• Adult male black bears average about 250- 350 pounds but can reach 700 pounds. Adult females generally weigh 90-300 pounds.
• Bears are omnivores. They eat berries, nuts, grasses, and other vegetation and will also consume insects and carrion. Adult males, in particular, will prey on deer fawns and moose calves.
• Black bears can run at a speed of up to 35 miles per hour and live to about 30 years old in the wild.
• Bears generally mate during the early summer and females give birth to one to four cubs every other year.
• In 1969 Maine established bears as a game species with regulated hunting seasons, mandatory registration, and a bag limit.
• In 1975 the state initiated telemetry studies to study and monitor black bears.
• The state’s general bear hunting season runs from the last Monday in August to the last Saturday in November. In addition, hunters may hunt over bait, with dogs, or use traps. Each of these particular methods has a scheduled time frame and regulations.
• About 90% of Maine’s annual bear harvest is the result of bait and hunting with dogs.